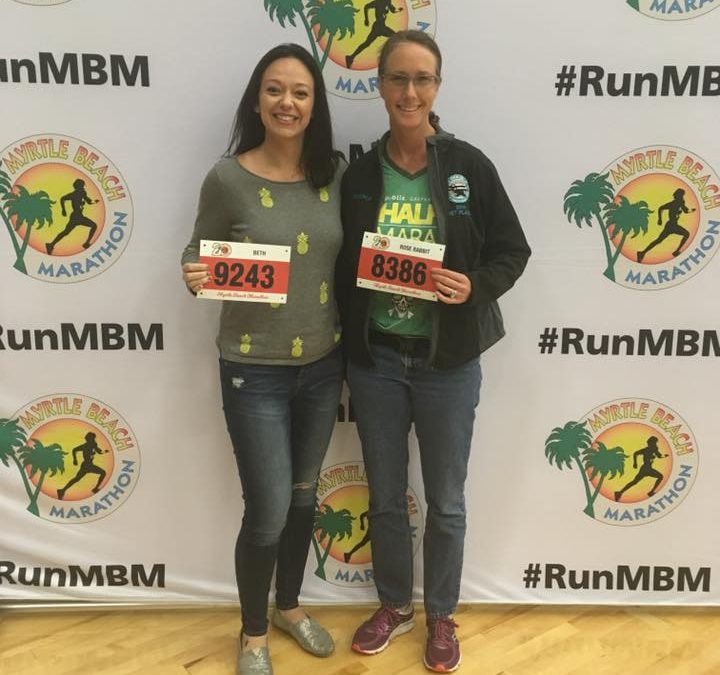 I did it! I ran marathon number nine and have the hobble to prove it!

In my last post I was letting you all that I didn’t have a great training cycle. Which, while it wasn’t perfect, it wasn’t exactly chopped liver either. I had five solid weeks and one 20 miler. I would have liked more than that, but I went into this race knowing it wouldn’t be a PR and that really took off a lot of pressure. I had an A+ goal of sub 4, but told myself that anything under 4:15 would be fantastic. I definitely didn’t want a repeat of 2016’s disastrous New Orleans Marathon, which had me walking by mile eight. Oof.

My training buddy Rose and I got in to Myrtle Beach on Friday afternoon and headed straight to the expo. The race was the very next day. We were all about a no muss no fuss marathon trip. Since Rose had to get back home quickly to see patients, and I didn’t really need a Myrtle Beach vacation without the S.O. we booked flights to leave and head straight back to Florida after the marathon. 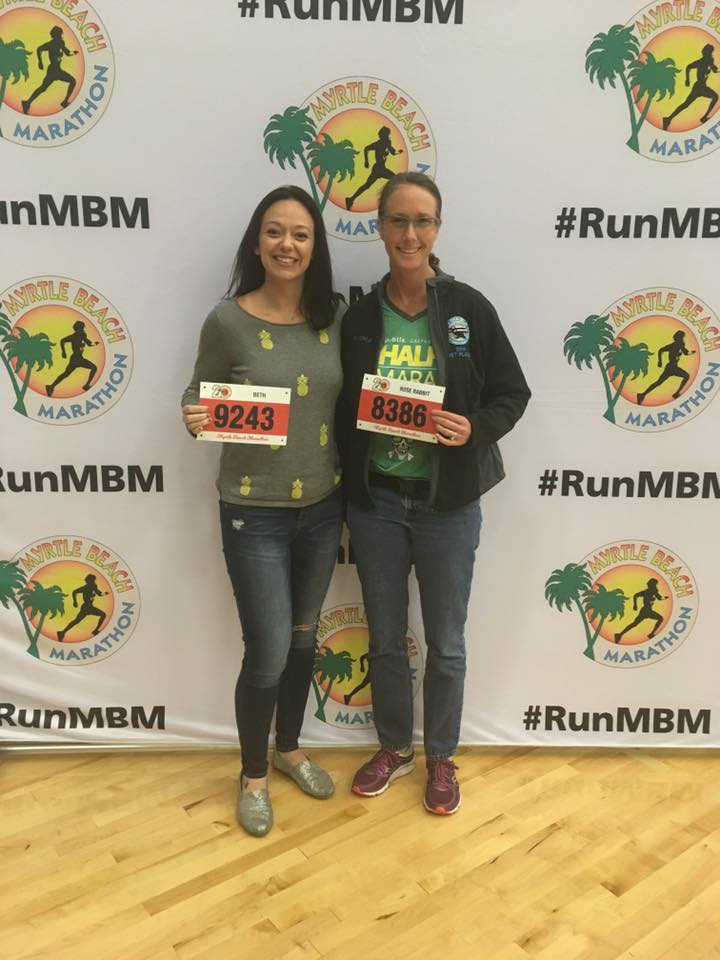 I know that sounds crazy, but it was honestly really nice. All we wanted to do was focus on the run and get back home. The S.O. had to work and since I live in a beach town, I wasn’t dying to explore Myrtle Beach. No offense, as it seems lovely.

I had mall pizza for lunch. Which is important to note as I experienced some GI issues on race day. Was is the pizza or the shrimp with marinara pasta I had for dinner? Who knows. But once I started going #2 on race morning, I didn’t stop. I know you all love this bathroom TMI. I took an Immodium around 6 AM and hoped that would help. The race started right at 6:30 AM.

Rose and I had been checking the weather and the temps on race morning were in the high 30’s. Score! The wind on the other hand was not as agreeable with gusts in the teens. Rose’s husband Pete told us the wind would be rough from miles eight to 18. Pete has the wind direction stuff down to a science.

We got started running and I felt I was running too fast with a mile one of 8:41. I wanted to keep it closer to sub 9, say 8:58. I slowed a little and Rose and I discussed our pacing. I need to note that I couldn’t feel my feet and that was dumb. But, I am SOOOO thankful to have finally gotten a cold and non-rainy marathon. It’s been a minute.

At about mile two I noticed a friend from Florida, Jill, right next to me. She introduced her boyfriend and the four of us chatted. Jill and I fell in step and Rose and Jill’s boyfriend fell in step. I knew Rose would be stronger and wanted her to have a solid marathon so as she and Jill’s boyfriend pulled away, I stayed a bit slower and steadied my pace. Rose has been training for an ultra and has been logging lots of miles. Jill, who is also a very strong runner, just wanted to run with company. Jill said she’d stick with me no matter what I wanted to do. I said great and on we went.

Running with Jill is like running with an entertainer. She is full of energy and the miles went by super quickly. Sure to Pete’s calculations mile eight greeted us with wind and it got stronger as we ran. I noted at mile 11 or so that my legs didn’t feel great. I was having a weird pain in my left hamstring and an even weirder one in my groin. When we hit mile 12 there was a BIG gust of wind that was quite unpleasant. And the road had a pitch that I didn’t really enjoy. Jill continued to make me laugh and on we went. 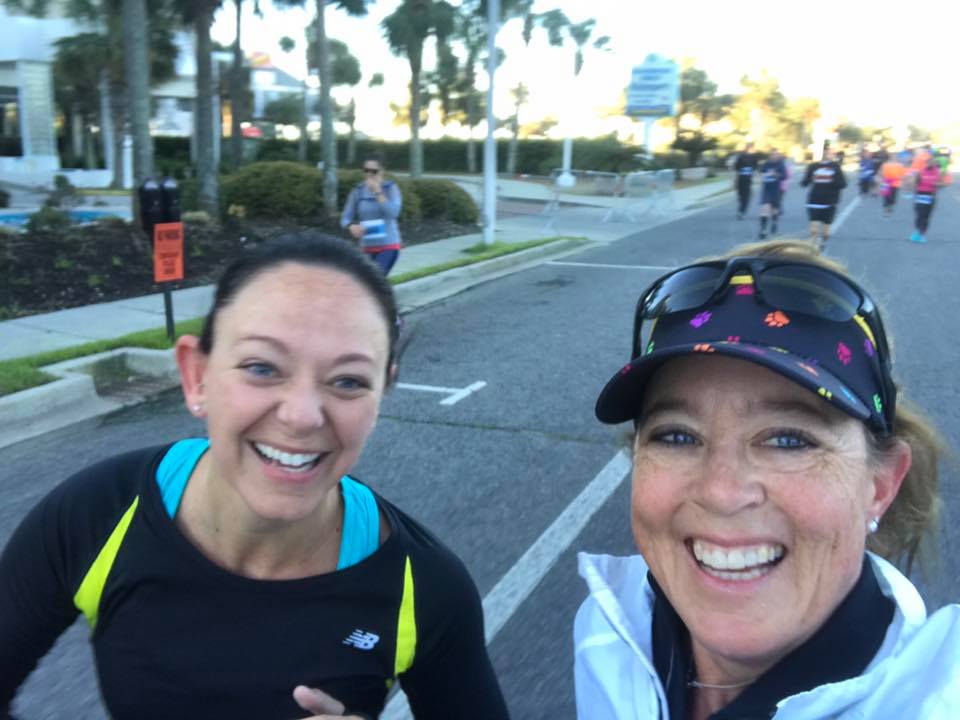 Jill and I at mile eight.

By mile 13 I had to fart. And considering my issues that morning, I knew not to trust that fart. So when we hit a porta potty at mile 15 I dashed into it and was shocked that I had to go. AGAIN. This stuff happens to me on training runs but not normally during races. It was super annoying.

My legs didn’t feel great and I told Jill that. She said we could walk if I needed to but I knew that if that happened I was done. I figured it was just one of those points during a race that I’d work through and be fine again soon. On we went. We were counting off the miles until 18 to get out of the wind. And sure as shit, we hit mile 18 and turned and the wind was gone. It. Was. Awesome.

We got to see Rose at an out and back section near miles 18 and 19 and she was about a half mile in front of us. I unfortunately had to go again and tried to wait as long as I could. Jill and I had been counting the relay runners we passed as if we were running a Ragnar and it became a little game. Granted we were passed by relay runners too but it was something fun to do as we went along.

We got to a section of the course that’s on a closed shady trail. It was really pretty and honestly, aside from that darn wind, we couldn’t have asked for better weather. The miles 18 to the finish were perfectly cool and dry. We saw a random porta potty at 22 that was on the trail with no line. I was again incredulous that my body still wanted to stop and go. Gr.

From miles 22 to 24 I slowed some. We walked for a few steps through an aid station but that was it. We kept running and tried to help those who looked to be struggling. Jill would say hello and encourage them to join us. She’d ask their name and try to get them to stay with us. It was about mile 23 that I really felt the full force of those previous miles. I told Jill I was struggling and unlike the strangers she was helping, she told me to suck it up. Ha! It was all in fun and we kept going.

I never hit a wall during this marathon and I never went to a dark place. Sure the bathroom issues were frustrating and there were points when I thought about how stupid it was to run 26.2 miles, but I easily shook those off. I may not have pushed as hard as I could but I really wanted to run strong from start to finish without ending up like the walking dead the last few miles. As the saying goes, the half marathon of the marathon really doesn’t start until mile 20. I knew I’d get to 20 without problems, I just didn’t want those last six point two to completely suck.

Jill and I saw the finish line chute and picked up the pace a hair. We ran into the finish line and I saw a 4:06 on my Garmin. I was super happy with that time and finished smiling and proud of myself. I had so much fun at this race and while I regret not going into it in better shape, I think I worked with the course and my training to execute a great marathon.

Rose and Jill’s boyfriend had finished in front of us and were there to greet us with smiles and hugs. The four of us met up later at Jimmy Buffett’s Margaritaville to enjoy some boat drinks and cheeseburger’s in paradise.

Marathon #9 is in the books! Happy Sunday everyone! 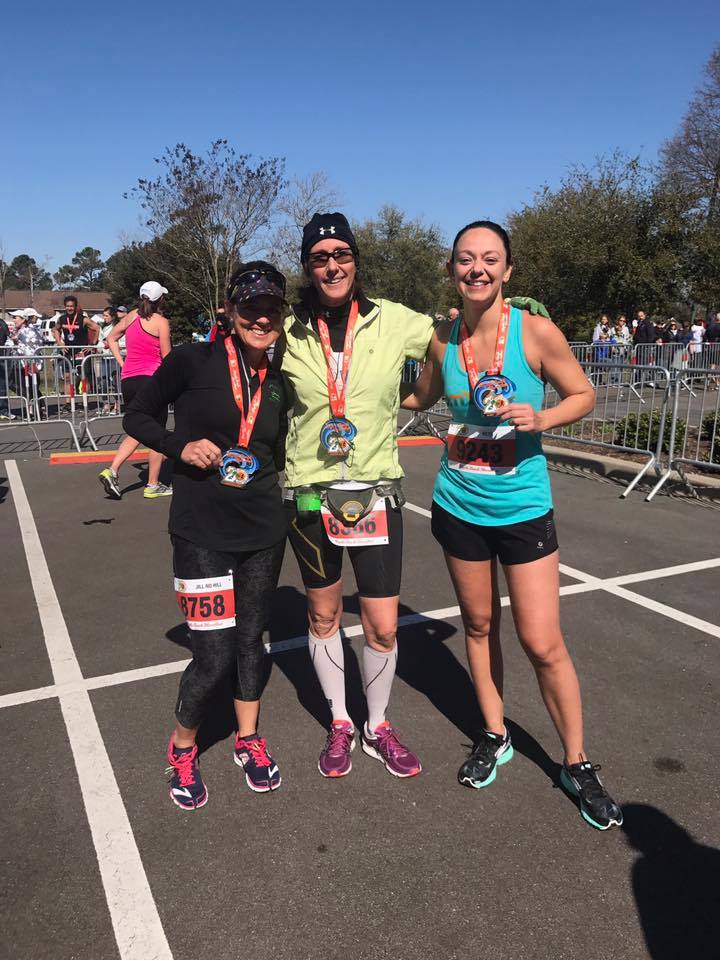