20 miles, a honey badger, and a great weekend 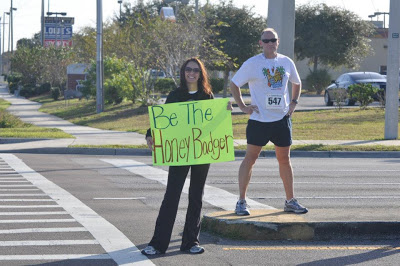 Happy Tuesday all! I had a fabulous weekend and am looking forward to another one. As I mentioned last week this was my first 20 mile run of my training plan and while it did hurt those last couple of miles, I got it done.

Thanks to help from running buddy Jeff I managed to hold a nice long run pace and only turned into a merchant marine with a mile left. Fortunately, Jeff told me he still likes me even after a 20 mile run which is difficult to do sometimes since I do venture into the bite me zone at that point. Cute K knows all about this….

In other awesome weekend news I volunteered at the BRA half mary and 5K on Sunday. I love volunteering at this race because the running group has done so much for me and I consider each and every one of them family. Everyone who ran did great and I was SO proud of my cousin Mark who ran his first ever 5K. I ran him in almost to the finish and then told him to kick it in and he did. Way to represent Cuz!

Other than my run and volunteering I got some stuff done around my new pad and went to the annual extended family holiday party. I must admit that going to a party with a plethora of food after a 20 mile run does not do much by way of “healthy eating.” Let’s just say I made our Cuban food buffet my bitch.

Now about that honey badger…

A little motivation for the racers. What was really hilarious was this young guy, maybe in his early 20’s, was in the top ten finishing the half when he saw my sign. He turned around and ran backwards all while yelling, “Look at the honey badger! He runs backwards!” Oh my lord, it killed me. I was cracking up. 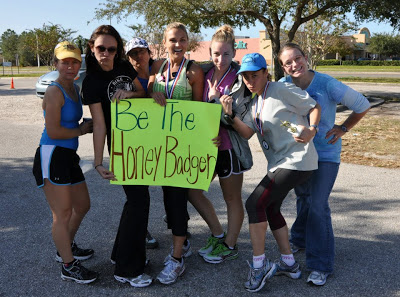 Some of the lovely ladies from the BRA who showed what true honey badger gangsta faces look like. 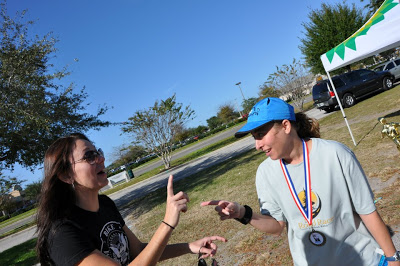 And finally P-Funk and I debating the age old question of who is most awesome. She says me, I say her. It’s really quite the debate.

And of course, I’m rocking my Punk Rock Racing tee. I love the question about what the HTFU means. I’m not telling. You’ll have to figure that one out on your own. Peace!