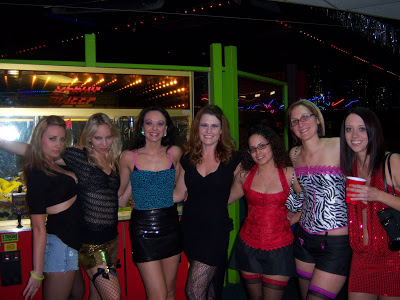 It’s rainy here in the not-so-much-Sunshine State, but I could care less because I need some extra rest. Why? Did you all forget so fast about my attendance at the pimps and hoes rollerskating party? You did? Well here’s how yesterday went down. And get this! There’s running!

Let’s see. Ok, so Friday I met up with some fabulous ladies for a nice little happy hour meal. We stayed up a tad later than I normally would on Friday but it was nice to change it up.

I had previously told P-Funk that I would like to run about 5 or 6 miles (on my facebook fan page). She talked me into 9 or 10. This seemed do able but I probably could have done less and been fine too.

On Saturday morning P-Funk and I decided to run a different route than normal and go into some neighborhoods we just normally pass by. Upon making it to our turn around point, I start thinking it’s over 5 miles. P-Funk and I hem and haw about how far we have actually run. None of us has a Garmin on and we collectively (ahem, ok it could have been my decision) decide to run the same route back.


On the way back we are pushing the pace and I tell P-Funk that I am dying. We slow up a bit and pick up a black lab. Or rather, he picks us up. I am not kidding when I say that dog just liked running. He ran with us for at least a mile and we had to ditch him at a neighborhood center because we didn’t want him to follow us out of the neighborhood. Cute thing.

Anyway, when we get back to the cars I’m told by Coach EK that he thinks we did 12 miles. Oops. No wonder I was sucking wind and dying. Ha ha! Then again, it’s kind of fun to just run and not really know the distance. I’m not sore today but I was definitely tired yesterday. I had to take a major nap before the pimps and hoes party, which is really all you folks care about.

My friend CM met me at the mall to pick out our outfits. We tried on everything from the sluttastic to the hoerific. We were giggling like mad at clothing that others were buying to wear as everyday use. Takes all kinds. Anyway, I wound up going with run of the mill street walker. High dollar hooker, I was not. At least my cropped tube top says otherwise. The party was a blast and since it was at a skating rink I did a little skating. No whammys though, thank the lord! See below for some photos. And like P-Funk said, there goes my career in politics…

Have a great Sunday all. 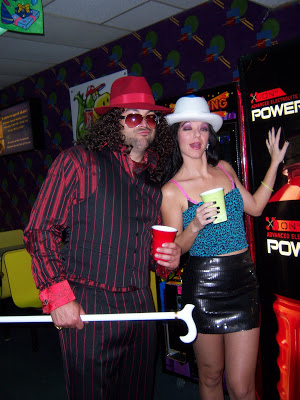