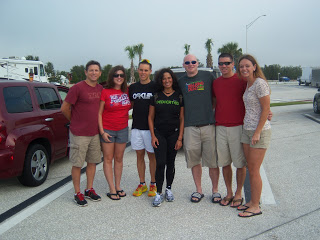 First and foremost I’d like to apologize for not getting in my Gangnam Style finish line dance. I had every intention of doing it coming down the finish chute. My race didn’t go according to plan. To clarify, I mean that I just didn’t expect to feel so good. I know, woe is me. I’ll explain that whole thing later in this post. As per usual with race reports, this is a long one so feel free to take that iPad or phone of yours into the bathroom with you for a potty read.
Pre-Race
A group of us headed down to Augusta on Friday morning. It’s about an 8 hour drive from Tampa so we caravanned down and stopped for lunch along the way. The usual tomfoolery occurred as it does with all road trips where we missed an exit, got stuck behind slow drivers, got separated from each other at times, and really wanted to get out of the car by the time we got to our hotel.

My fantastic sherpa and amazing friend Jess from Cuban Running Crisis was the BEST road trip buddy I could ask for. We had lots to talk about and she never let me have a negative moment of self doubt. In fact, if I even mentioned my bothersome IT band she’d yell “Squirrel!” to get my mind off of it and stay positive. 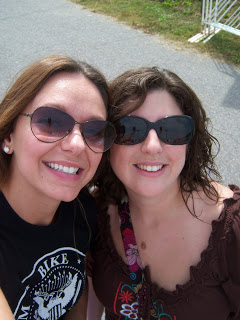 The good news is that we got to Augusta in time to head to the host hotel to check in and pick up our race packets. No long lines for us, score! We ran into Tori and she gave us some Bonk Breakers that she scored from her boyfriend who works for Ironman. During a previous training ride Tori and I had discussed how we were bad at hydrating. I joked that we needed to write “Drink Bitch!” on our arms. Well, wouldn’t you know it? Tori had water bottles made with a friendly reminder. Love it! Thank you so much Tori! 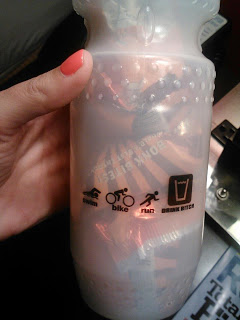 We all got our packets and wandered the expo a bit before heading back to the hotel for pizza and much needed rest. 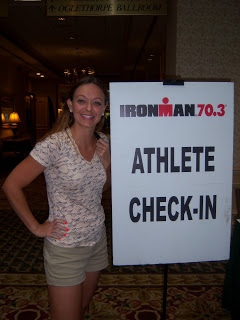 Saturday morning came quick and a few of us headed out for a pre-race run and ride. My legs felt good on our two mile jaunt and Dolly (my bike) was gearing ok after a few tries. I was nervous as we found a few little hills try ride but mostly because I feared the bike course was going to be rough on Sunday. And because, we all know how I am was on the bike.
After the shake out run and ride we ate breakfast, cleaned up, and headed out to rack our bikes and finish up some shopping at the expo. I got real nervous when we reached transition and had to part ways with Dolly. Fortunately, Tim the Unicorn (a good luck gift from my friend Tim), stayed with Dolly to keep her company over night. Don’t worry, I put him in the bento box so he stayed warm and dry. 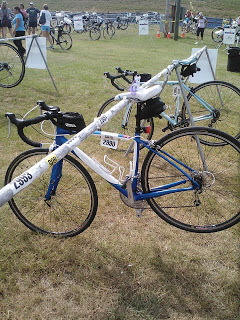 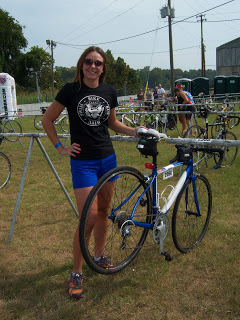 With the bikes racked, we went to the expo to shop and pick up last minute items. I really didn’t buy too much on this trip and I know it’s because I was anxious and just wanted to get back to our hotel to rest my legs and get in a nap before dinner. Insert antsy and weird B.o.B. here.
Another blessing on this trip was that we had no issues calling ahead to Carrabba’s and got in and out quickly and with good service to boot. There are a few pasta options in Augusta and they all get pretty packed on race eve. This stuff always makes me panic so I’m glad logistically it all went well. My Type A personality is not so good with waiting and getting to bed late the night before a race. We got to the hotel, sorted our race day gear and it was lights out. Of course lights out meant little to no sleeping since I basically had to nervous pee every hour on the hour. I had crazy dreams during those random hours I did sleep though.
Race Day
The alarm jangled at 3:30 AM and sherpa Jess, myself, and our race roommate Celeste (AKA La Jefa, which means boss lady en Espanol), got up and dressed and headed downstairs to meet up with the guys.

Another bonus in logistics is that we got to transition early and had tons of time to hang out before the waves started. On the one hand, the waiting is brutal, but on the other I got to see all of my non-Florida blogger peeps. JC, Jennifer, Summer, and Karen and I all met up at some point. Photos ensued.

Before I knew it, I was westuiting up and hugging Jess and heading down the dock to swim start. I am fairly certain I said “holy shit” and “oh my God” eleventy thousand times.
The Swim: 1.2 Miles
Heading toward the dock I chatted with a few women in my wave who were super nice. They helped calm me down and a couple were also first timers. All we had to do was finish, right?
I could have gone without the wetsuit because the water wasn’t quite that cold but since all of my buddies were doing and it was a water start, I figured, what the hell. It brings to mind my mom saying, “If all of your friends jumped in a lake, would you?” Apparently, the answer to that is yes. Yes mom, I’ll jump in any body of water if my friends do.

As we got into the water from the dock, I was happy I chose to wear the wetsuit and enjoyed the buoyancy as we waited for the start horn. I noticed the current was pushing us out and we had to tread water backwards to stay in line with the start buoys. Hooray for a river current!

The horn sounded and off we went. Someone had said to stay to the middle of the river to really get the current and move to the right as I got closer to the exit. I tried to keep a steady pace and not kill myself the first couple hundred meters. I found a groove and went with it. My dumb goggles fogged up so I had a hard time sighting but I just kept going.
And going.
And going.
And going.
Not for nothing but 1.2 miles in a river feels like for damn ever. I kept looking for the end of the seemingly endless line of buoys and I admit that my goal of not breaststroking didn’t happen. I did the breaststroke maybe twice to sight and clear out my dumb foggy goggles. I’m ok with the little bit of breaststroking I did because it was for legitimate reasons and not because I was tired or being lazy. I was veering too far to the left of the river and wanted to get back toward the center so I could move right closer to the end.
As soon as I saw the houseboats and more swimmers getting bunched up, I knew I was close to the exit. I had zero issues with other swimmers during this race. It got crowded upon exiting but nothing major. The river was cool and refreshing and reminded me of how much more I like to swim in fresh water. Salt water can suck it.
I got to the exit which is an incline up a very short hill. I looked at my watch and was pleased with my time. I didn’t feel like I killed myself and spotted Jess as soon as I got up the hill.
Swim Time: 27:54 (1:26/100)
T1
Having never before completed a race with wetsuit strippers, I have to report that it is the best thing since cupcakes sliced bread. The wetsuit strippers stand in a row and tell you to pull your wetsuit down past your butt. I had been pulling it down as I ran so when I got to them it was ready to go. I dropped down on my back on the mat and my wetsuit stripper, a middle aged woman, yanked it off me so quickly I can guarantee she cut a good three minutes from my transition time. It was awesome.
I got to my bike, wiped off  my feet, threw on socks, shoes, helmet, race belt, sunglasses, said hi to Tim the Unicorn, and headed out. I was feeling great.
T1 Time: 4:51
The Bike: 56 Miles
I clipped in easily and caught a glimpse of Jess as I headed past transition and out on the course. I found a good cruising speed to start. There were a ton of cyclists bunched up at this part and I got worried riding with so many nearby. What if someone drops a bottle in front of me? What if I get a penalty for drafting? How hard is this ride going to be? I pushed those thoughts away and rode on as quickly and cautiously as I could. 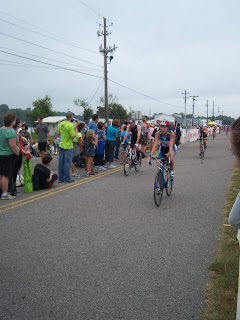 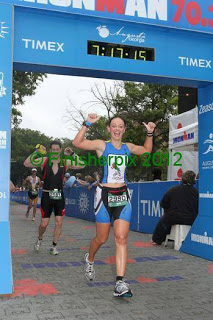 The second I crossed the mat I started crying. I couldn’t help it. I was a big ball of emotion. I got my medal and looked around and still couldn’t quite understand how I finished under six hours. In my wildest dreams I never thought I’d go sub-six. I saw my friend Ian and tried to lock it up but the tears rolled on. Chris and Celeste came to meet me in the finishers tent. I couldn’t eat and all I wanted was to get to Jess.
As soon as I saw her I bawled like a big, fat baby and cried a little more when she gave me the card my sister had sent with her to Augusta. I opened the card and it started singing, “Celebrate good times! Come on!” And that’s exactly what I did. 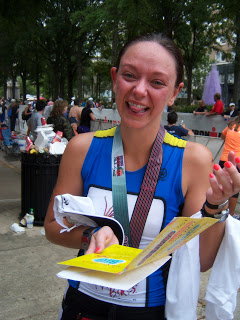 Thanks to all of my friends and family for putting up with all of this training and days I couldn’t stay out late or hang out because of this here little race. HUGE thanks to Jess, I don’t know what I would have done without her keeping me calm and positive. Thanks to my coach, Navy Steve, who predicted I’d go six hours even though I didn’t believe him. And thanks for all of the post race congrats and kudos. It was a perfect day.