Back in the saddle

I first started riding a bike again, after a very long time mind you, and it was merely because I had a running injury and hated sitting inside while all my running buds hit the pavement. I borrowed my stepmom’s hybrid bike. It had a shark horn that sounded just like a horn that a clown uses.
It wasn’t until 2010 that I started thinking about a triathlon. I got in the pool and realized my days of high school swimming had helped build a solid base. I also got more comfortable with the idea of riding a bike. Thanks shark horn!
I decided to buy a real bike in early 2010. I had great help in deciding what to purchase from my friend Casey. And while it took quite a lot of time to get used to the clipless pedals. I fell about a hundred times before I learned to take my foot out BEFORE I stopped. Side note: I fell just the other day in front of Meghan. Momentary brain lapse I suppose. It was super funny this time though.

This is the day I bought Dolly. I was so proud and so excited. We had some special times together and it was with sadness that we parted ways this weekend. As much as I wanted to keep her, I knew I wouldn’t be spending a lot of time with her and she needed to find a home where she’d be loved and taken out lots and lots. Goodbye, sweet Dolly.
I grew to love cycling while training for my first half IM. Ok, maybe not LOVE cycling, but definitely liking it. I think I disliked it because I definitely felt it was harder for me than swimming and running. My quads constantly burned with hard effort and keeping up with a group ride always left me frustrated. Granted, I got better the more I rode and a little less afraid each and every ride.
Enter Amanda. My new bike. 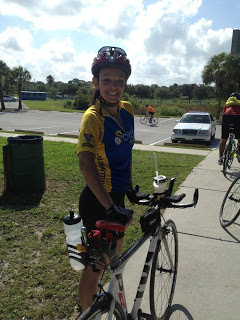 I know I said this before but a tri bike has made a world of difference for me. I watch new cyclists, like Meghan, who start out really strong on a bike. It took me a very long time to get up to the speeds I’m at now and while I think it’s solid, I think this bike has really helped. My cadence has jumped up exponentially and that constant quad burning is no longer constant. It could just be that the engine got better or it could be that the bike has made all the difference. I’m guessing it’s a little of both.
All of that aside, it’s crazy to look back at where I was as a triathlete and where I’ve come. I’m most proud of how far I’ve come on the bike. I still get nervous before group rides and I prefer to ride on trails but I haven’t pulled a Houdini or cried on a ride in quite some time.
I am currently loving my bike. I’ve been riding more and wanting to ride more. The hard work has paid off and I look forward to putting in more hard work as 2014 looms. Amanda and I are going places. Here’s to the journey!
How do you feel about cycling? What made a difference for you?