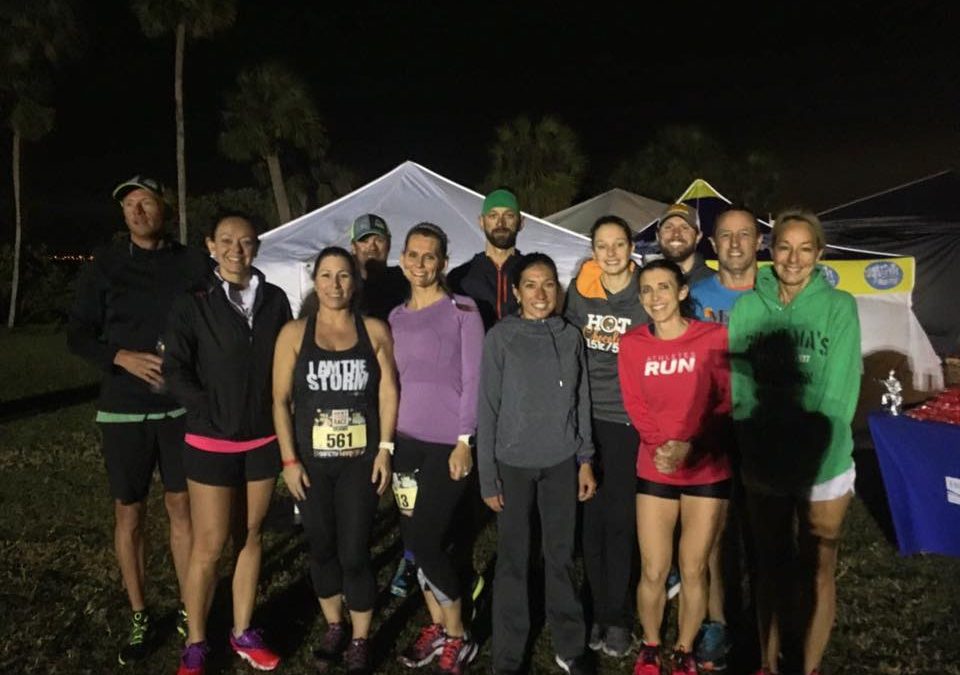 I’m not sure if you all know this, but I hate the 10K distance. I never run it, and when I do, I’m reminded of how completely stupid it is. Don’t argue with me. It’s dumb. It’s basically a 5K that’s extended. You get to redline and hang on for 3+ more miles. It. Is. The. Worst.*

So, what do I do? I decide to race the 10K at Best Damn Race last weekend.

I spoke with Coach Jon about racing again, the weekend after a half marathon, and he wanted to know why I would like to race again so soon. I figured for starters, it was free. (Which we all know is the BEST reason to race.) I’m in pretty good with the race director so I got a comp. I also figured that since I plan to race the olympic distance triathlon at St. Anthony’s Triathlon this year it would be a good way to prove to myself that the 10K is really not THAT bad. And of course, bonus points for finally hitting a new PR at any distance. I haven’t run a PR in quite some time and I knew the 10K was my best shot at it.

I admit I had some trepidation about racing a 10K the weekend after a hard fought half marathon. My legs didn’t feel super fresh, but they weren’t shot either. Race morning conditions for the 10K looked more than ideal, save for the wind. I woke up super early, as per usual, and got to the race location about 16 hours before it started. I sat in my car and took advantage of a primo parking spot with the heater on full blast. In terms of temps, it wasn’t that cold, but the wind was making my teeth chatter.

Fortunately, the 10K started first and I love an early race start. I will never complain about a race starting “too early.” Those of us running the 10K or half marathon from Tribal were able to take a group shot, where almost everyone looked at the camera… 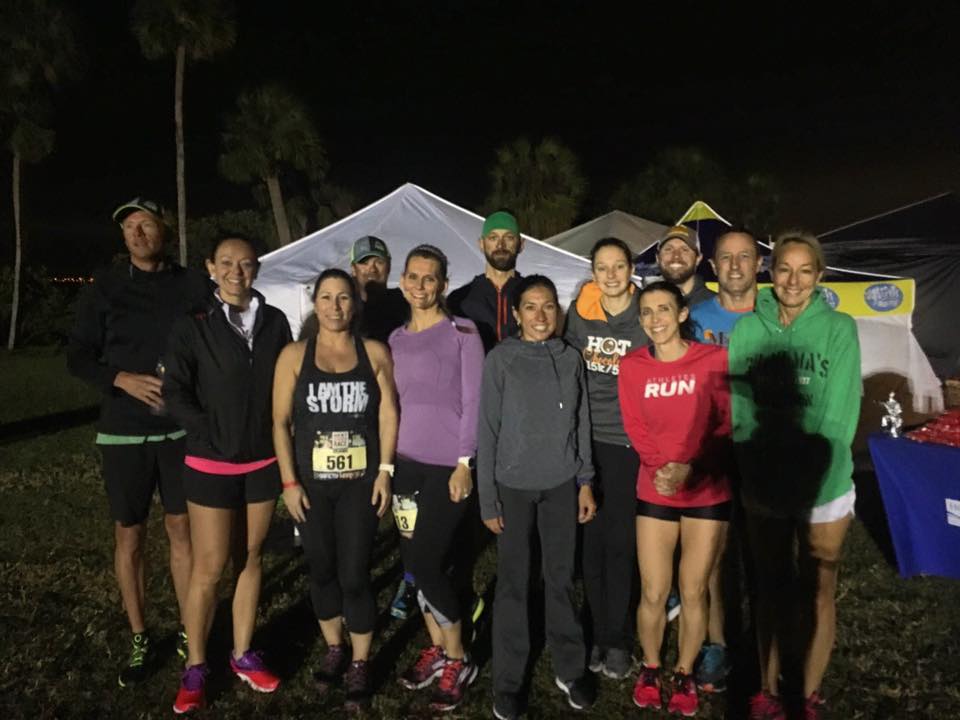 I digress. The race started promptly at 6:45 AM and off we went. I run this race route regularly so I knew exactly what to expect. It’s got some elevation changes, yes, in Florida, and while they aren’t exactly huge, they are enough to feel and see in Training Peaks. And for the record, I did correct the elevation for however well that actually works.

As I ran the first mile, I felt really good. There’s a slight downhill there, as you can see, and my first mile clicked off at 7:43. Uh-oh. I was aiming to run a 49 minute race. I knew that was about an 8:03 per mile, so naturally I ran about 20 seconds faster than that. I gave myself a “What have you done!” thought and then thought, “You know what self? I’m gonna hang on and see what happens.” Mile two was slightly faster at a 7:42. Oops. “You know self, you really aren’t so great at pacing today.”

And then I realized, I had three more miles. F$^king 10K.

This picture is when I was telling myself (and the photog) how much I loathe the 10K. I mean, have you seen a more stank face? I don’t think so.

Mile four is probably the biggest hill on the course. And I felt it. While I did pass several people on the climb, my pace dropped to a 7:55. Well crap. I told myself, “Get your shit together” and picked up the pace. Mile five was a 7:44, and then I knew I just had to hang on for the last mile as a PR was in was my grasp. Unfortunately, the last mile was straight into a head wind. I tried desperately to find someone to tuck in behind for wind blockage but we were all running like lunatics at this point – speeding up and slowing down. No one seemed to be holding a steady pace, including myself. One man I tried to tuck behind slowed down, so then I went to pass him and he sped up. I don’t think it was intentional, the wind just sucked and it was tough to get a handle on pacing for this final mile. I heard mile six (7:53) beep on my Garmin and I did my best to pick it up heading into the chute. 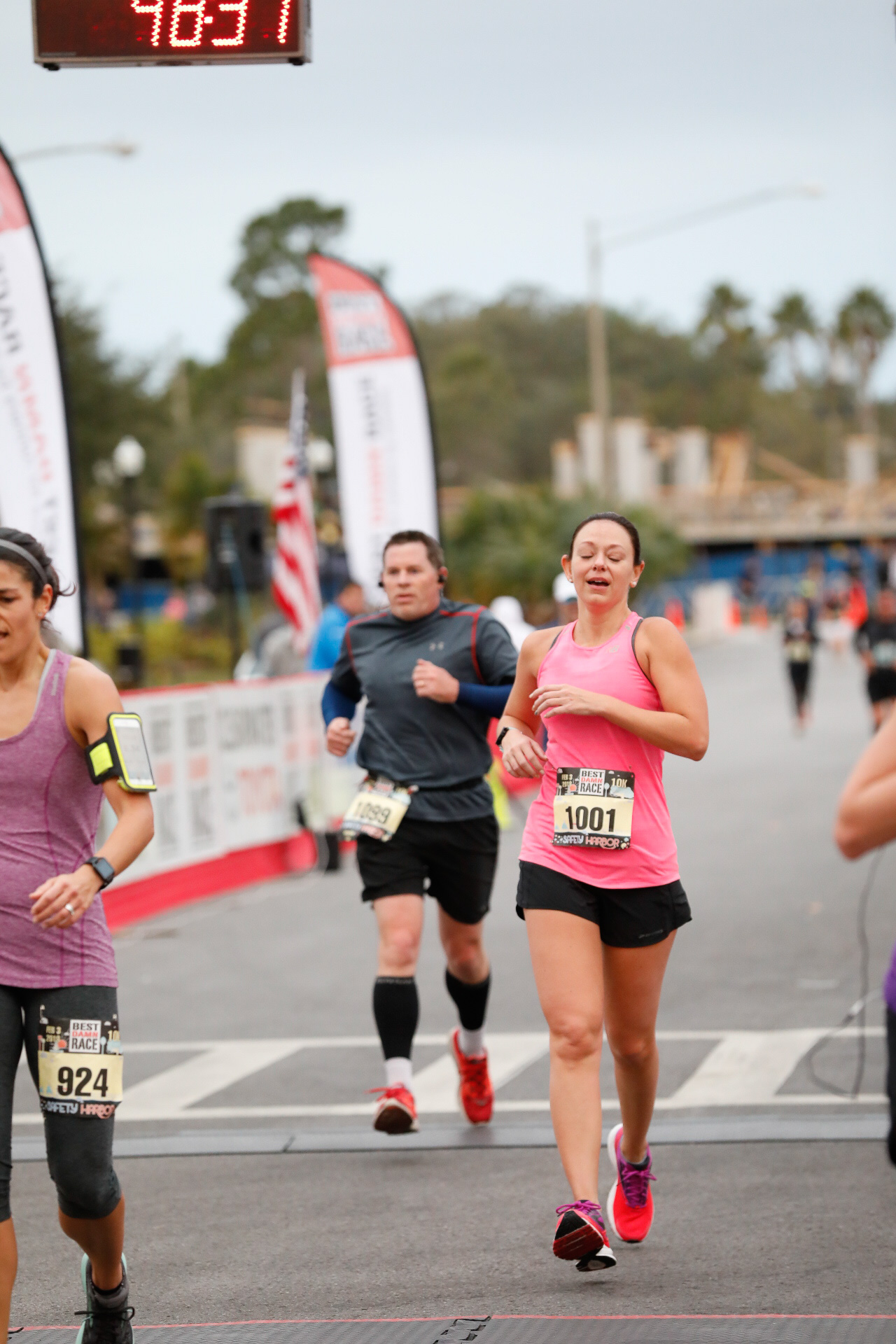 I’d like to say that several factors played into my personal success at this race:

*All opinions are my own and you know I’m right about the stupid 10K.