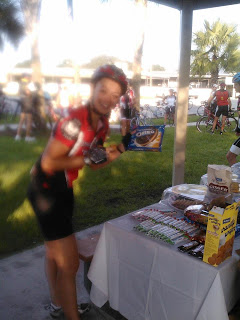 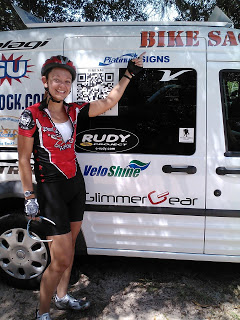 Bottles refilled to the top and bellies again full of yucky, sweet carbs, we head out for the final twenty six miles. I was excited because I knew I’d be finishing this ride. I was tired and would only get more tired but, I didn’t ride this far to quit.
The lady cyclist, the steady group, Doug, Pete and I all stuck together for about five miles. I was getting anxious and wanted to speed up, so as soon as Pete said we were leaving the steady group, I was ready to go. As we pushed the pace, I started to feel myself bonk. I got to that point where I couldn’t turn my legs faster without the lactic acid burning in my quads. I slowed down and Pete and Doug stayed with me while our lady friend rode on.
I drank as much as I could, ate a Honey Stinger gel (delicious!) and felt better after a mile. I told Pete I was sorry and as per usual, he said not to worry, we were doing fine. I found my strength again and we pushed on. As we moved along we lost Doug and he caught up to us at the final rest stop at mile ninety-five. Pete and I didn’t stop here long because the longer I stood the more my legs started to ache. I told Doug I was sorry but I had to get back on that bike and get moving. He said not to worry and he’d see us at the finish. That was that and off Pete and I went. In full disclosure, I licked my forearm a couple of times to get some salt. Yes, I know this is gross and weird but I was craving salt and figured if my body wanted it, I’d at least feed the craving this way. Don’t judge me.
Here is where things got funny. Pete started singing Ted Nugent and quoting Rocky. I think I sang Rawhide, but inserted “man my ass is swollen.” Some random guy on a mini van pulled alongside me and asked how I was doing. I think he may have been offering me some candy. Some other dude drove entirely too close and slow next to  me as well. It was weird. Pete and I started discussing how badly our butts hurt and I told Pete about the God awful hot spot I had on the ball of my left foot. It was seriously murderous. My knees were hurting and my right shoulder was really pissed.
When my bike computer hit one hundred I was really happy but also really annoyed because we had five stinkin’ more miles to go. I asked Pete whose dumb idea it was to ride a one-oh-five mile century and he happily let me know it was me. We trudged along and Pete dragged the crap out of me those last ten miles. He’d pull as fast as he thought I could handle and then ease back to make sure he didn’t drop me. Everyone should get a Pete. I can’t really thank him enough for all he did for me on Sunday.
When we finally saw the hotel sign I could barely believe it. I had ridden my bike over one hundred miles. I got a little choked up for about a second but then was just so unbelievably happy to get off the bike that when we rolled to the car I unclipped faster than I ever have. I thought about kissing the ground but really didn’t want to bend over for fear that I wouldn’t get back up.

My final thoughts on this ride are that I’m so happy I did it. I shocked myself and need to give myself a lot more credit than I do. It may have taken me six hours to finish but it’s something I never thought I could even start and I’m proud of that.
I do however feel that everyone who’s ever completed an Ironman must be doping because the thought of running a marathon AFTER riding over a hundred miles seems like sheer insanity. You all are awe inspiring and even though I was impressed before, I’m even more impressed now. Yes, I’d do it again. But only after enough time has passed to forget the hurt. And it did hurt, but only really badly from about mile eighty five on. I was super sore yesterday. I went to yoga, snuggled my nephew and Lloyd, and watched a lot of TV. It was a totally needed recovery day.
Thanks for all of the encouraging and kind words. And thanks for all of the kudos via FB, twitter, and DM. Augusta 70.3 here I come.