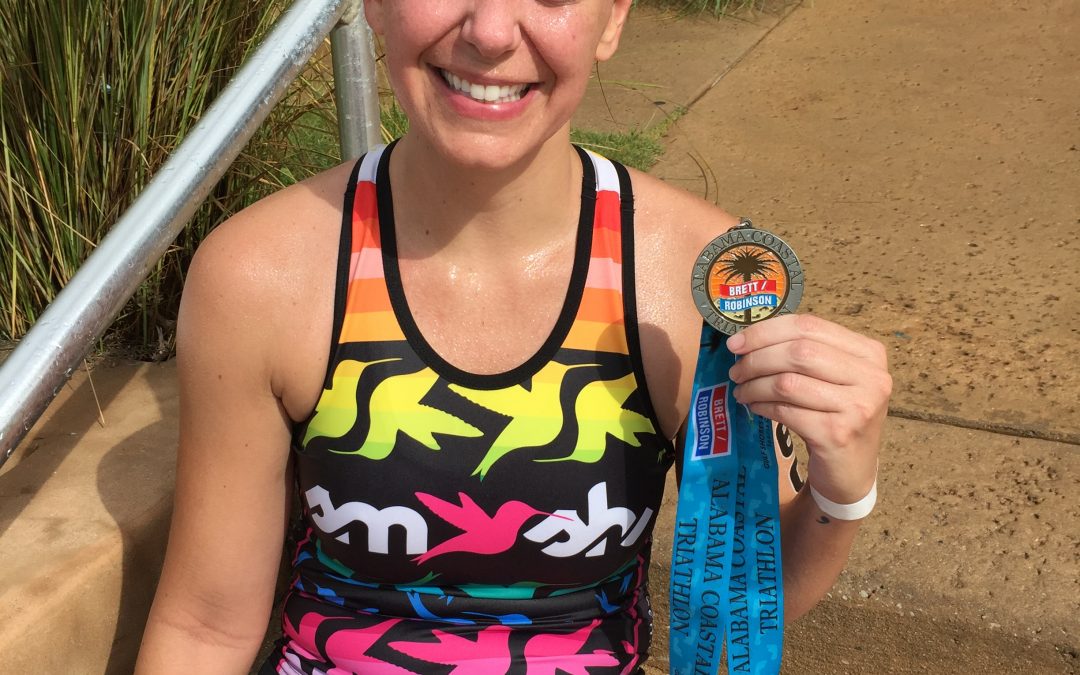 I am back home and have so much to share with you all from my trip to Gulf Shores & Orange Beach, Alabama! I figure you all definitely want to read about all of it, but let’s start with the race report!

This was my first time racing the Brett Robinson Coastal Alabama Triathlon and I was fortunate enough to receive a free entry in exchange for the review and social media, for both the race and the travel. Score! I checked in and got my bike all racked on Friday afternoon with Jesica from Runladylike along for sherpa and fabulous friend duties. 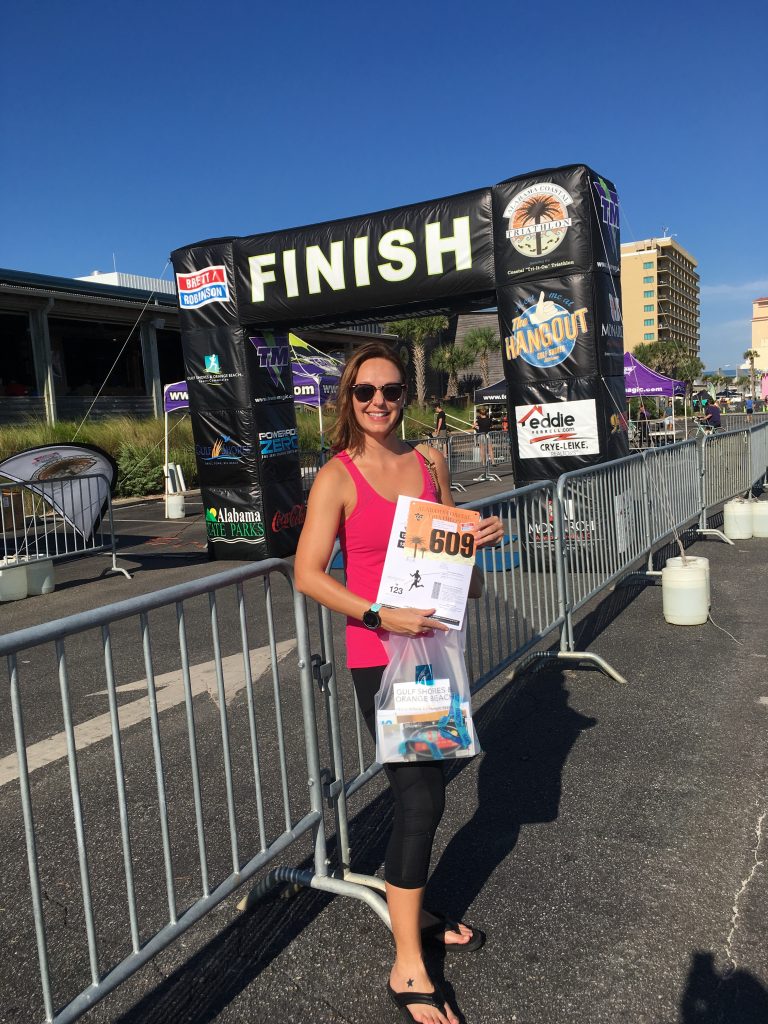 One of the very best things about this event was the bathrooms. I waited in ZERO lines to go. It was awesome as I normally have to go two to three times before a race. Ha! 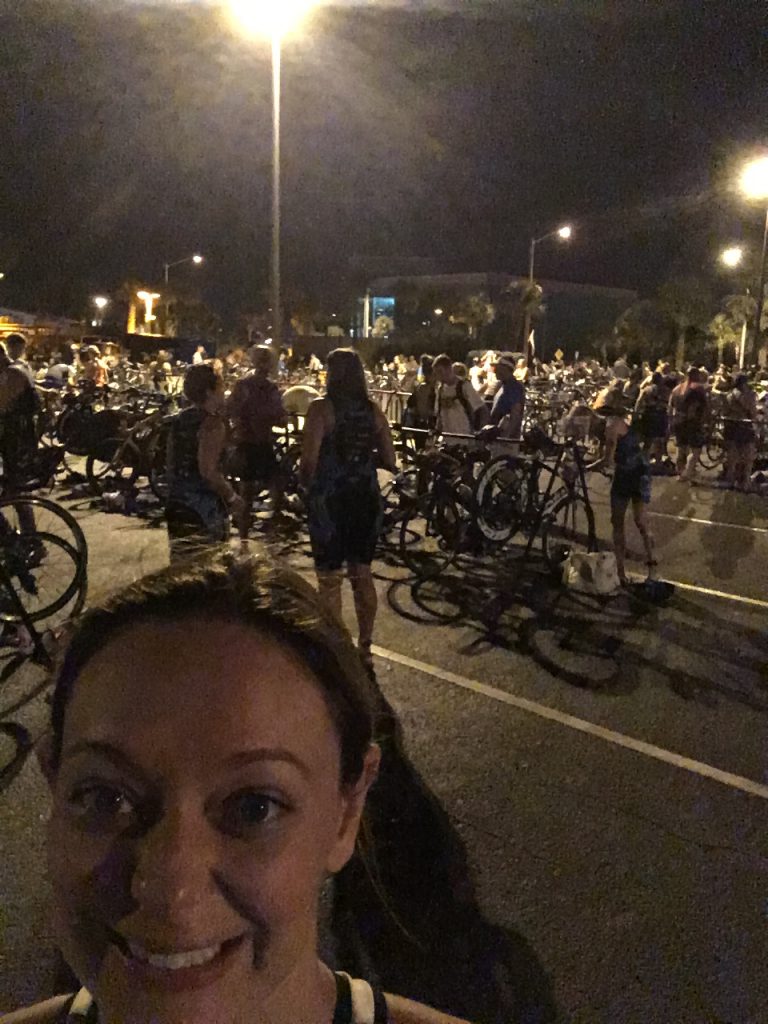 The Swim
As swim start time was time trial, it was based on what you entered when you registered. I believe I put 30 minutes and the first number to begin the intermediate swim was 505. I was number 609. I wasn’t sure how this time trial start would go but it was very smooth and one swimmer went at a time as the race director said their number. “Six-oh-seven. Go. Six-oh-eight. Go. Six-oh-nine. Go..” and off I went.

The swim was two loops which was also a bit new to me as I’m use to a long, straight swim. I’ve swam in the gulf plenty of times so I wasn’t concerned there. I took off running into the water and did some dolphin diving to get past the breaking waves. The water was a bit choppy but I used some straight arm technique to get through it. I’m fairly certain I smiled the entire swim. I was having the time of my life. I passed A LOT of people. I didn’t expect that at all but the first loop went by so fast that I was almost sad that I only had one loop to go. I did look at my watch after the first loop and it said 1:22/100 yards. This seemed very fast, but I just smiled and hopped back in to dolphin dive the start of my second lap.

As I exited the swim and looked at my watch I saw 31. It was slower than I wanted but honestly I did not care because I had the most fun swim of my life. I literally did not want the swim to end.

T1
As I hit the lap button on my watch, which was in multisport mode, nothing happened. It didn’t want to work. I ignored it and tried to get my socks and shoes on. Then, I set up my panini maker and got to work on orders from athletes for hot ham and cheeses. Heh.
T1 Time: 2:43
Rank: 10th/17 in Age Group

The Bike
I kept trying to hit lap on my watch and nothing happened. It then randomly just shut itself off. Fudge. I rode and drank my Gatorade and tried to get it to come back on. It finally did but when I got it back to bike mode it just kept shutting itself off. It would turn on and turn off and turn on and turn off. After three miles of this I gave up. I just rode by effort.

The course was a long out and back with a loop in the middle from mile 16 to 22. I got to ride right past the Brett Robinson vacation condo we were staying at and saw Jesica immediately. I got to see her twice, which was nice. (She snapped this picture on my way back past our condo.) 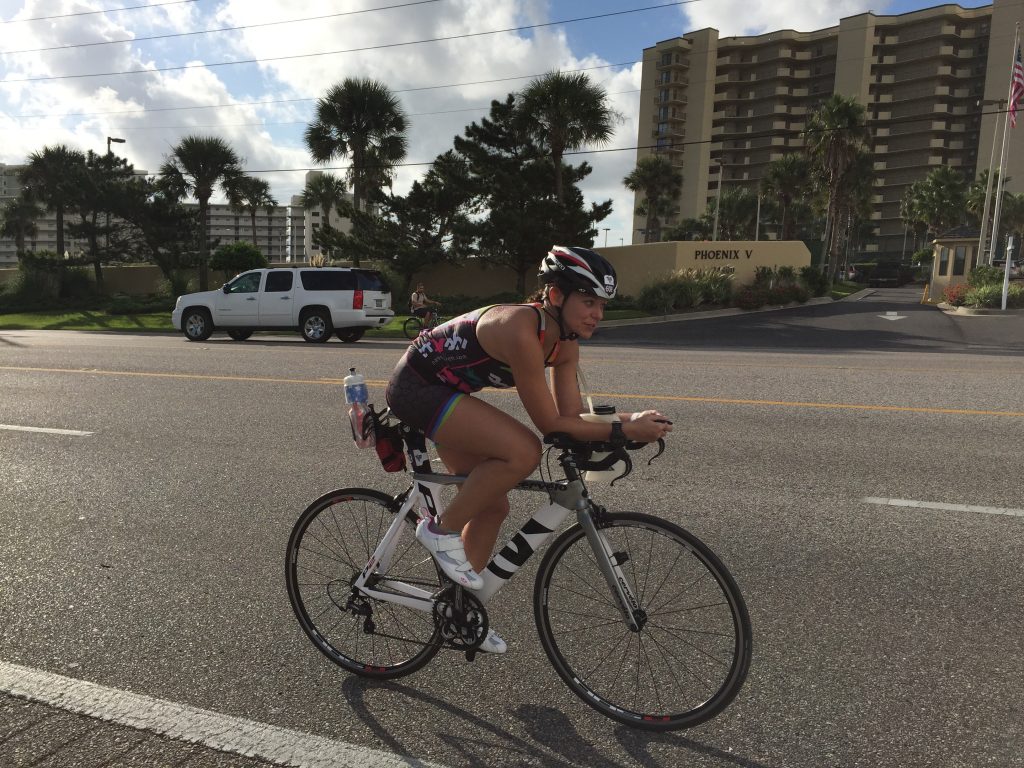 The bike course was flat, save for one bridge that did kick my ass a little. The one thing I did not like about the bike course was that it was open to cars and I saw a few athletes ride too risky for my tastes. Plus, right after the bridge there was a high traffic intersection that didn’t seem to have enough volunteers at. I definitely slowed down a lot there. As I passed A LOT of people on the swim, A LOT of people passed me on the bike. Some things never change. Hee hee.

At mile 18 I was ready to be off of the bike. At mile 20 it started pouring. I’ve raced in the rain before so it didn’t bother me and it felt nice since it was fairly warm and humid out. The rain lessened a bit but as I got back to transition it was full on pouring again.

In looking at my bike time, I did just about what expected and riding by effort actually worked pretty well. I knew I’d be a lot slower than I have been in races past as I’ve not trained nearly as much as I would have for a race of this distance, but considering what I did put in, I’m happy with this.

The Run
Yay the run! I always love the run because I am so over being on the bike. It was pouring and Jesica yelled out how that would cool me off. And she was right. I felt AMAZING the first three miles. And wonder of all wonders, I got my damn Garmin to work for the run. I focused on passing people who I had seen fly by me on the bike. And there were plenty to try and pick off. I took water from the aid stations and tried to keep the pace as close to 8:30 as possible. I knew I was running a little faster than that, but again, I felt awesome. *Cue foreboding music*

I hit the turn around at mile three-ish and started to feel the full force of the race on my legs. By mile four, I was slowing and it stopped raining. It felt like the very moment it stopped raining it became sweltering out. 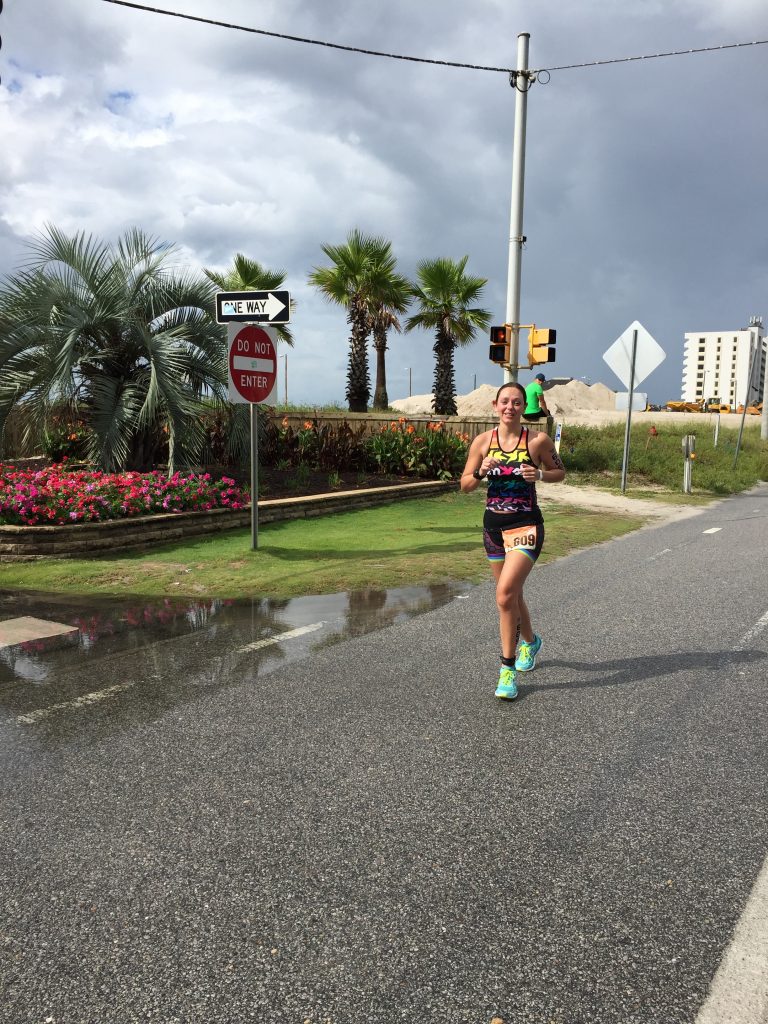 I’m telling Jesica in this photo that the wheels have come off. And you can see the big puddle next to me from all of the rain. I got passed by a man who I had passed doing the relay and that annoyed me but my legs were in full on protest at mile five. I told myself I could slow down but I would not walk. 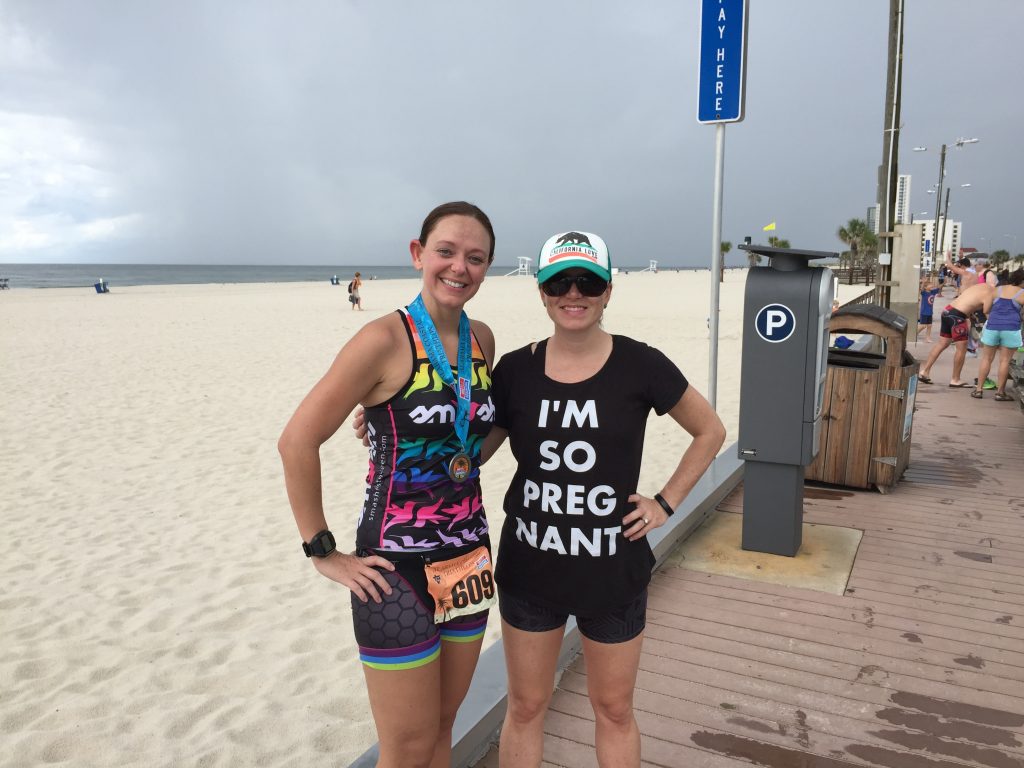 Post race pic with my wonderful friend and sherpa, Jesica. She’s definitely SO pregnant. People LOVED this shirt. It was great to see her while I was out on the course. She even got a run in while I was swimming.

Overall, I’m happy with how I raced. I can definitely improve but this was a great way to get back into the swing of triathlon. As for the race itself, I really enjoyed it. The course was well marked and save for the open bike course I felt it was logistically well planned. There were plenty of aid stations on the run and the swag was standard: t-shirt, post race hot food, etc. I’d definitely recommend this race if you are heading to Gulf Shores and Orange Beach, which you should. The beach is beautiful!

Stay tuned for my travel post where I share all of the amazing FOOD and activities we participated in while there. Did you all know that fried oysters where heaven?