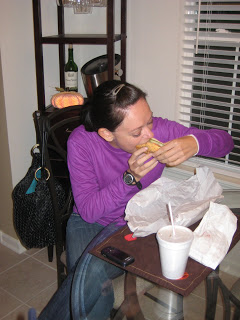 I’m baaaaaaack! I’ve got so much to tell you all about this trip that it has to be in segments or you’ll burn your retinas.
Good thing Coach EK was here to fill in. Although, Lloyd was not too happy. (He got over it pretty quickly when I gave him the Chicago dog I had stuffed in my purse before the plane ride home.) 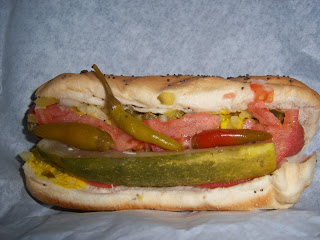 Yes, that is the actual dog I ate. I know it looks kind of crazy but it was delish. Apparently Chicago dogs incorporate everything but the kitchen sink.
As you all know the Redhead kicked her first marathon’s butt and is now more than ever, my hero. Seriously, the girl is indefatigable. CONGRATS REDHEAD!!!!
I am also ELATED to report that Speedy Jess is officially a Boston Marathon qualified runner! She blew her qualifying time out of the water. CONGRATS SPEEDY JESS!!!!
Now, I have so many pictures, over 400, that I am having trouble deciding where to go with this recap. First things first, we had such a great time and I really, really enjoyed meeting Redhead’s family. Her cousin, M and M’s boyfriend B, and Redhead’s Dad and aunts were just super great people. (No surprise there really.)
In addition I got to meet Running Spike. Go read his recap please. I’ll wait. CONGRATS SPIKE!!!!
You back? Ok so, the other bloggy meet-ups didn’t happen but knowing they were there running too is good enough for me. 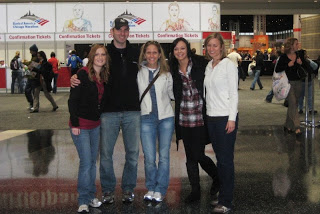 Redhead, Spike, Speedy Jess, Moi, and Speedy’s friend also a first timer I did have an awesome eat and drink fest and full filled my dreams of pizza, beer, hot dogs, and a fancy pants dinner date with the Cuz at The Signature Room which is on the 95th floor of the Handcock building. Can you say champagne and creme brulee? I knew that you could. Jamoosh, they have a pretty tasty local beer called three one two. Don’t say three twelve or the locals will look at you funny. Not that I did or anything. 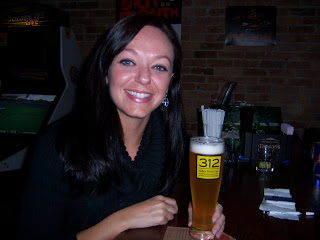 In addition to the three one two, I had some other tasty libations and decided that it would be awesome to jump in on keyboard and jam with this handsome fellow. 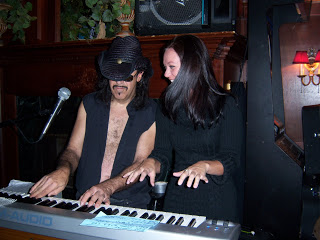 It had to be done. The people of Chicago are so amazing and the Chicago Marathon should be on EVERY runner’s list. It is a must do. It is certainly on mine now.Check back soon for the official spectator report. I missed you guys and have a lot to catch up on!