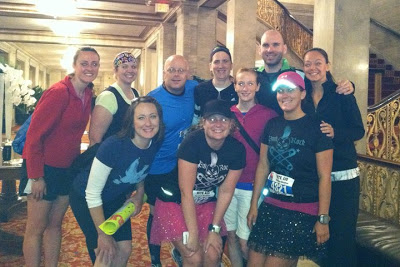 As my alarm jangled I jumped from the hotel bed and immediately shut it off. Uh, ok, so it jangled and I stumbled around wondering why it was so GD early. I’m pretty sure I was nowhere near being quick about it since Red mentioned later that she was basically cussing me out for taking so long to shut the damn thing up. Heh.

I opened my caffeinated Gu with my eyes partially closed and slurped it down. My new thing for ensuring a good pre-race poop is to suck down one of these bad boys, as they work like a charm. I was on the toilet within the hour and happy as a clam to have that, ahem, out of the way.

Shortly after my alarm went off the others woke up. I’m fairly certain that two of them needed water. Apparently the Cleve is a fun place to bar hop. Again, I say, bastards.

We all got ready and headed out of the hotel to meet up with a few other bloggers.

I really enjoyed meeting all of these other bloggers. I had read a few of their blogs but am happy to find a few more great blogs to read! As the cheering squad left, I walked to the start with Joanna, Jenn, Dave, and Jodi. Erika and Nicole were off to be maniacs. God bless em!

I think we were all nervous and the chatting helped. But, we soon had to part ways for one reason or another (parking meters, potties, line up, etc.).

I believe I was one of the few doing the half so I found the 8:23 pace group and lined up a bit in front of them. At this point, I was freezing. I had worn my favorite Lululemon running top. The print is called Unicorn Tears and I’m obsessed with it. I had also worn shorts under some throw down pants. I didn’t have a throw down long sleeve shirt and I shivered waiting for the start.

Finally the gun sounded and off we went. I’m not even sure it was a gun honestly, it could have been a horn. All I know is that I was off and ready to run this half. I enjoyed the song “Cleveland Rocks!” as I crossed the start line and pressed start on the Garmin.

Now, as I pressed start on that Garmin, I kept looking at the pace to see where I was. I am a TERRIBLE pacer. I’ll zoom up and then slow down and repeat. Unfortunately, my Garmin is from the Paleozoic era and requires batteries. When I told Red this she kindly offered me hers to wear. Sweet right? Well….sadly her Garmin was set up to MPH and not minutes per mile. Every time I looked at it, it said 7.9 MPH or 6.9 MPH or 8.1 MPH. “What the hell does this mean?” I thought. Oh well. I just tried to look at my time per mile and laughed about the Garmin fail.

At about miles 3 or 4 I overhead a guy say “We’re at an 8:20 pace right now.” I looked over to see two gentlemen running and chatting. I mosied over and said “Hey, can I run with you guys for a bit cause I have no idea what pace I’m running.” They said sure and off we went.

The two men I linked up with were named Dave and Dominic, which made it very easy for me to remember their names. Yay alliteration! We chatted and exchanged race stories. They were both super nice guys. Dave was running the full and dutifully kept us on pace, but we kept pushing it. I got a little concerned for him since he was running the full and keeping a very quick pace. I found out he was a track coach for a high school so I figured he knew what he was doing.

At mile 6 I told them my cheering squad would be around mile 7. I told them that my cheer squad would be loud and amazing and awesome. And then we hit mile 7. No cheer squad to be found. Then mile 8. Nope, no cheerleaders here. Hm. “Do you even have friends out here?” They joked. I wondered what happened but just kept running.

Someone told me that this race was flat. I’m pretty sure that person is a big, fat liar. This race is not flat. Ok, from a Florida resident perspective – this race is not flat. Probably from a person who lives in Michigan and Ohio it’s relatively flat. But to me, there was one hill that was intense enough to shut me up. Dave told me it was coming and kindly talked while we ran up it as I huffed and puffed. He then said, “That’s it Beth. We’re over it.” Hooray!

The miles ticked by and as we hit the final 5K mark Dominic and I said by to Dave and he continued on with the full marathon folks and we picked up the pace. Right about this time I heard a very loud Spike on his bull horn. I got so excited I sprinted to see them. I was super surprised and happy to see this: 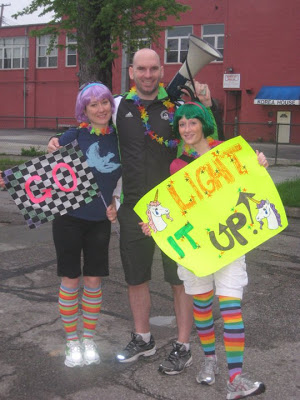 They had donned Bobbed wigs in support of B.o.B.! How cute, right? And of course the signs were inspired as well. I saw a girl at St Anthony’s tri with a sign that just said “Go” and I loved it. Thus, the GO sign. And I love the phrase “Light it up!” cause Cay-See yells it everytime she passes me on the bike and of course, the Unicorn’s with tears – for the aforementioned Unicorn Tears that I am obsessed with. SERIOUSLY, I LOVE THESE PEOPLE! Spike said on the bull horn “That’s my friend Beth passing you! Don’t let her pass you!” It was the funniest thing and I pumped my arms and sped off with the invigorating jolt you can only get from cheering friends.
Apparently there was a little spectating snafu, but I was so happy to finally see them I didn’t care at all. They rock!

I looked at the Garmin and saw that I could make my 1:45 goal if I pushed. Neither Dominic nor I had a pace to look at and it was sad to see Dave go. I figure we dropped it down to 7:00 to 7:30 minute miles for the last two miles.

As I crossed the finish line I looked at the time on the Garmin and knew I’d hit that 1:45 goal. I was happy but know that I can go faster at my next half. It was a great day!

I got to see Jodi and Dave as we headed back to the hotel and since we were all pooped and cold and Red’s leg was bothering her we called it day and headed back to the Mitten state. We got back to Red and Spike’s and said goodbye to Jen B. We then rented a silly Rom-Com and headed out to meet Sun Runner for dinner. (Sun Runner and her dad had also ran at Cleveland that weekend and she is delightful.) I had a most delicious steak and lobster meal since I had a shiny new PR, I felt I deserved it. Heh.

The following day Red and I hit up the outlets near her home and then I had to say farewell to the Mitten. I had a wonderful time and am sad to be so far from my Boo again, but she’s coming down south soon enough and I can’t wait to see she and Spike again.