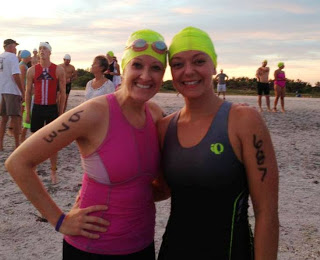 On Saturday I raced a sprint triathlon in my hood and while it wasn’t my best race, I did have fun time racing with friends so close to home.
I didn’t have time to get to packet pick up during the week and since the race was so close, I opted to pick up my stuff on race day. The S.O. and I had no issues getting all set up and hanging out with friends before the first wave started.
As per usual at tri’s I walked barefoot from transition to the swim start and back to the restrooms one time before it was my turn to go. In doing so I realized that I must have the feet of a newborn baby because by the time I hit the water, my feet were tore the eff up. I mean, they were really hurting. I suppose I need to toughen them up or something. Maybe fire walking?
Swim 1/3 Mile
This race was on the smaller side with about 500 athletes, give or take. I was in the last wave (again) and got to start with a bunch of friends because our wave was females 20-34. I lined up in the front with Stephanie and as we waited was saw a pod of dolphins literally swimming right next to the group of men who took off before us. It was amazing. These dolphins were so close to them I thought for sure I was going to run into one when we were swimming. It was probably one of the coolest things I’ve ever seen. I’m sad I don’t have any photos of them.
I had decided before the swim start to swim strong and steady. At my last two sprints I went out too hard and was seriously out of breath when I exited the water. I stuck to this plan and came out of the water in good time and didn’t feel like I was dying.
Swim Time: 7:51 (5th in AG)
T1
Remember how I mentioned my feet were all jacked up? Well, they hurt pretty badly as I ran toward my bike. I got over taken here by a few ladies who clearly had tougher feet than I do. I stayed on the pebbled walk as long as I could but when I hit the gravel of the parking lot where our bikes were I was moving very slowly. What can I say? I have wimpy feet.
T1: 4:50 (10th in AG)
Bike 13 Miles
The good thing about this course is that I know it very well. Meghan and I have ridden it quite a few times together and I’ve done it on numerous other occasions. I knew we had three bridges to conquer and I felt fairly confident as we started climbing the first one. I’m not the world’s greatest climber but I have to admit that I’m proud of how I rode. I didn’t get passed on the bike and I rode a hell of a lot stronger than I thought I would.
Bike Time: 41:58 (10th in AG, 18.6mph avg)
T2
Hustled in from the bike and plopped down to put my shoes on. I was trying something new by sitting down to put them on. I’m still working on transitions. Obviously.
T2: 1:34 (14th in AG)
Run 5K
Here’s where things got weird for me. I was not feeling the run. I couldn’t turn my legs over and I didn’t have my normal game face on. I just didn’t feel like being uncomfortable and the first mile was pretty slow for me in a race. I saw the S.O. early on and he told me to “karate kick” or something for the camera. I wound up yelling “Hiiii-ya!” and doing this:
I’m not really sure where my “eye of the tiger” race face went since this run was more like “eye of the sloth” for me. Sure, I was having fun, but I probably should have picked it up a bit sooner than I did. I started to get it together around mile two but in general, it wasn’t my best performance. My bike rank was higher than my run rank, that’s gotta be a first. Ha!
Run Time: 26:13 (11th in AG)
Overall Time: 1:22:27 (8th/21 in AG)
Thoughts
After this race, I wasn’t feeling so great. I got a pretty bad dehydration headache as soon as we got home from breakfast and I took a HUGE nap. I can blame the run on tired legs or not really try my hardest or just simply not having a good day. Yesterday I was feeling pretty bummed about it and I only got in a five mile “long run.” My hamstrings were really tight and sore and I talked myself into cutting it short and calling it a day. I moped around feeling guilty for cutting it short and realized I need to take this whole run and triathlon less seriously. It’s a hobby and it’s supposed to be fun. I need to remember that.
That can be hard to do after you have been racing for a while. And of course, it’s all in perspective. There’s a ton of people who are faster or stronger than I am and there’s some that are slower. None of this truly matters in the long run if I’m not having fun. I can get bogged down in competition and forget why I do all of this to begin with and that’s to stay healthy and HAVE FUN. It’s nice to be reminded of that every now and again.
The best way for me to do that is to take a look at a photos like these, my favorites of the day: 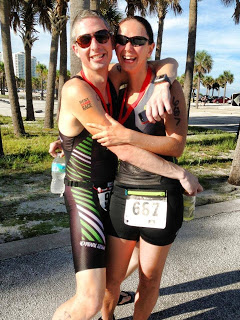 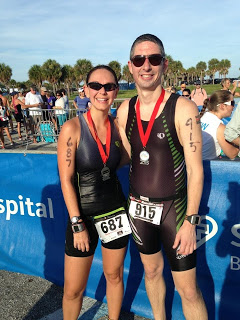 The best part of my day was hanging out with friends and the S.O. And seeing him get 3rd in his age group, and Stephanie get 3rd in ours. Not to mention eating croissants and crepes with them after the race! THIS is what it’s really all about, enjoying the whole experience, not just worrying about times and stats and placing. You all remind me that next time I get all goofy again ok? 😉
Thanks for reading and have a great Monday!