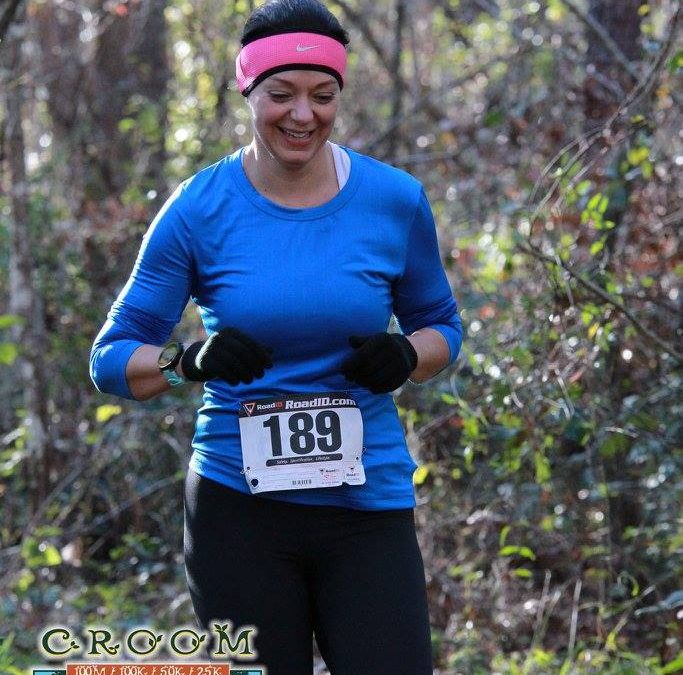 It’s the second week of January and I’m on track with my goal of one post per week. Ha! Let’s see if I can make this last.

Last Saturday I ran my second 25K ever. In. Da. Woods. I ran this race last year but I ran with a friend who was coming off of a surgery, so we took our time and sort of dicked around. This year I had a goal to run it harder and earn myself a top finisher award. I was pleasantly surprised to learn that I had a bunch of friends and Tribal Multisport teammates race the various distances offered as well.

Croom is a park located with the Withlacoochee (yes, coochee) State Forest. It’s about an hour north of where I live and even though I’ve run there a few times, I always end up a tad lost and alone and it’s dark and scary. Fortunately for me, my good friends Brian and Caitlin offered to carpool. I gave them a dollar for the toll road and they bought me post race snacks. Not sure how I ended up on this side of the deal but now that I am writing it out I should probably send them flowers or something. Hee hee…. 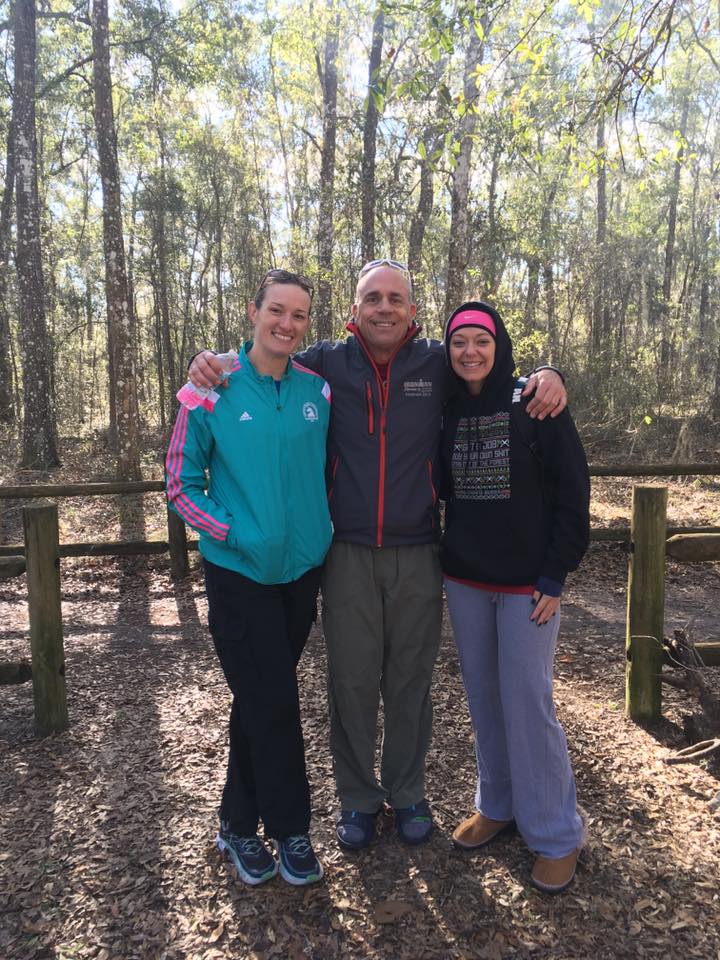 Post race with Caitlin and Brian. We call ourselves Team BBC.

Anyway, last Saturday was a cold one for us Floridians. I mean, I think it was cold everywhere last Saturday and it got us too. The feels like temps at Croom were about 27 degrees when we started and I don’t think they warmed up that much by the time we finished. I decided to run in tights, a tank, a long sleeved shirt, gloves, and a head/earband thingamajig. I figured I’d take something off at some point during the race. Spoiler: I did not.

My strategy for the start of the race that keeps you on the road for about a mile, was to use the cold weather for a little free speed before I hit the trails. My first mile was an 8:30 and I felt really good. I slowed it down once we hit the sandy section and tried to pick it up again when we reached more hard packed dirt. At some point Brian was with me, then passed me, and I knew Caitlin would pass me at some point too. I ran along alone for a while. I stopped quickly for water at the first aid station and then kept chugging along.

I fell in line during a single track portion with a man named John and a woman who was right behind him. They seemed like actual trail runners so I was happy to keep their pace and tried to hang on as I was running so much better than I had at this trail in the past. (I did a night race here before too and it kicked my butt.) I felt a lot stronger than I have in a while and started to look at my pace and work on a goal to stay within. As the terrain got hillier and root-ier my pace slowed but I fought through.

The thing about trail running that is so so so great is that you are so focused on not busting your face (at least I am) that the miles, while slower paced, go by so much faster! Before I knew it, nine miles had gone by. My IT bands and hips were not happy at this point as I haven’t been doing a lot of hill work but I pulled a Jens and said “Shut up legs.” 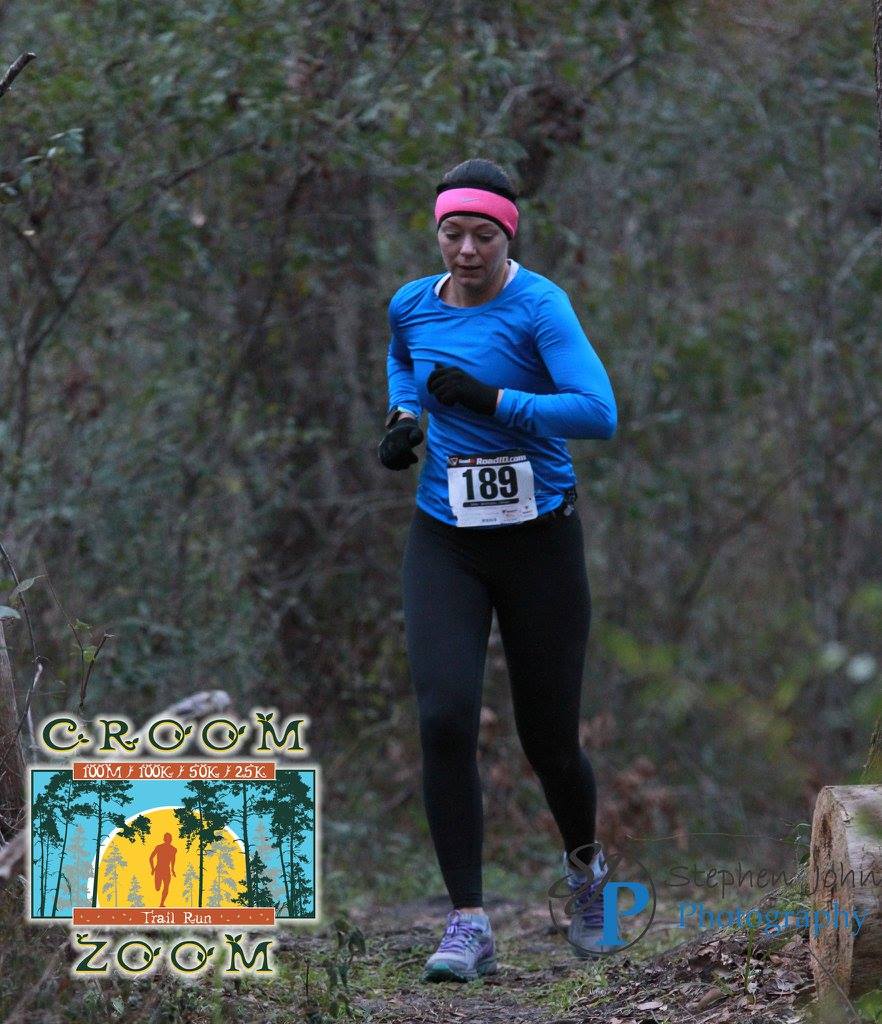 By the next aid station, around mile ten, Caitlin caught up to me and Brian was there as he had waited for Caitlin. We said our hellos and Brian stopped to pace with a friend running the 50K, while Caitlin took off like a rocket. I kept to my pace and decided I would finish this thing under 10:00 minute miles if I had to sprint up a hill. Ok, so I didn’t quite sprint up the last big climb but I did try to keep the pace up. The closer I got to the finish the more excited I got about how well I was running. The cold weather helped, of course, but I also think I have gotten a little better at running in da woods.

I finished right under 10:00 minute miles and was able to snag a top finisher award. I came in 13th out of 45 women finishers. I’m pretty pleased with that. What I am not please with is how badly I beat up my toes! The third piggy on both feet was so angry after that race. I think those toenails may go bye bye. I’m not quite sure what I did there, but I did wear trail shoes that I’ve worn a few times before. I’m guessing elevation and scrunching those toes for stability really pissed them off. Poor little piggies. 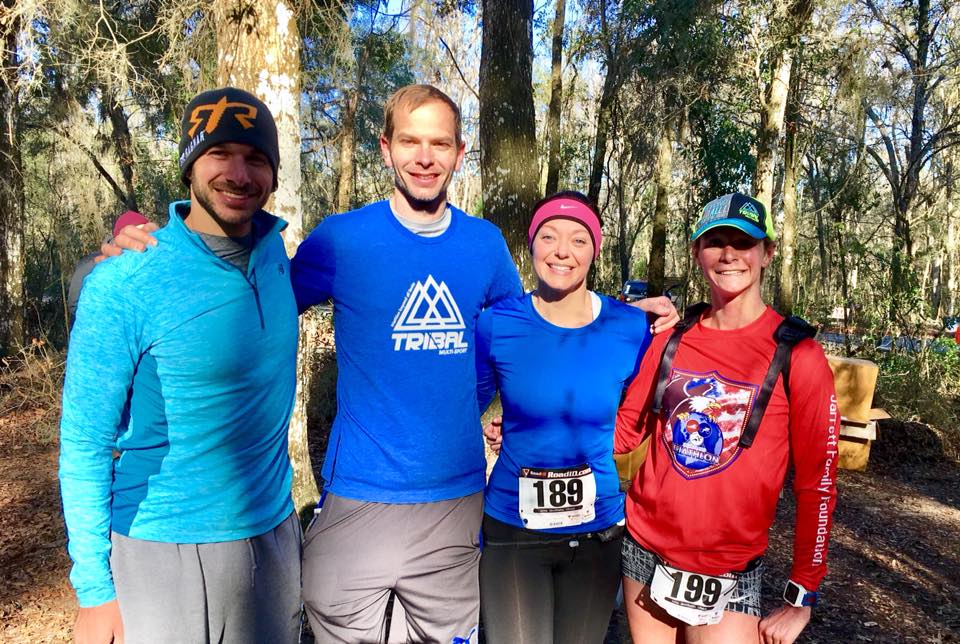 Tribal buddies: Michael, Michael, Me, and Erin (It was her birthday!)

After the race we celebrated with more friends and shared Erin’s birthday cupcakes. They were delicious! Everyone had great races and headed home to thaw out.

I still love me some running in da woods and hope to do more trail races this year. I don’t think I’ll ever do an ultra, but never say never…