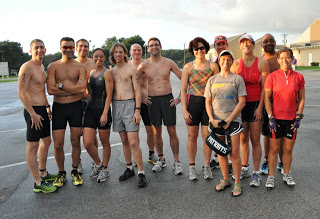 Holy busy week Batman! I cannot believe it’s already the day of humping and I have not yet written a post. I’m a bad, bad blogger. I am sorry that your lives were put on hold until I got here. Ha. Ha.
As I mentioned on Friday I did an itty bitty race on Sunday called the Dash N Splash. This race was a one mile run, a quarter mile pool swim, and then a two mile run. Uhm, was this race made for me or what?
With Augusta looming I made a plan to take the whole damn thing easy. I haven’t done any speedwork since I started running again in July so I think my fast twitch muscles may have packed up and left my body altogether. Heaven forbid I run all balls to the wall for a mile and pull a hammy. Or fake pull a hammy. Again.
Anywho, I got to do this race with a bunch of my old crew since it was in the area that I used to live. I also got to see a few people who run really, really ridiculously (Zoolander) fast but never swim. Ever. It was going to be hilarious and awesome.
The weather looked like poop all morning and as soon as the race started, so did the rain. It was a serious rain and even though it appeared to be lightning a little, no one cared and we all raced anyway. The first mile I ran fairly comfortably with the Lazy Runner. He was also taking it easy so we chatted for the first mile as I saw the speedy dudes way out in the lead. My friend Josh (AKA The Redneck Flash) probably clocked a 5:30 mile. He was so far ahead of me it was silly.
Transition involved throwing my shoes down on a tennis court, grabbing my cap and goggles, and jogging over to the pool start. The swim was set up as a snake swim so you basically had to swim under the lane ropes once you got to the end of a lap. I made a huge mistake of taking that first run so easy because when I got to the pool it was a total cluster frack. There were people who didn’t appear to have ever swam a lap in their lives. There were people walking. There were people swimming two across doing breaststroke. This was more than likely a lot of people’s first foray into multi-sport. Thus, I did my best to pass people safely. I did get bonked in the head pretty good once and thought about swimming under people but I wound up passing a crap load of people. (This wasn’t exactly the most competitive event I’ve ever done.)
As I exited the melee of a swim I had caught The Redneck Flash and a few other dudes who basically crushed me on that first mile, and would also crush me on the last two, but hey at least I caught them on the swim. Of course, I probably should have because these are dudes who NEVER swim and signed up for this race on a dare. It was pretty funny seeing all these guys in the pool.
I threw on my running shoes, which were absolutely soaked at this point from the rain, and headed out for the run. Lazy Runner joined me and we kept a good pace for the last two miles. I totally let a lady pass me who looked strong and told myself I didn’t care because I was just having fun. No reason to kill myself.
I finished the race, got my medal, and said hi to all of my friends. The post race food was probably the best I’ve ever had after an event: Jimmy John’s subs, cookies, fro-yo, bagels, fruit. Awesome spread!

When they finally posted the results I was the 4th woman overall! Not too shabby for a race that I didn’t really race and had a total blast at. I’d do this again in a heartbeat and if they have it next year, I won’t be so laid back on the runs.
I was thisclose to a trophy. Let’s be honest here, we all love trophies.
Happy Hump Day peeps! Ever do an aquathon? Ever want to try one?