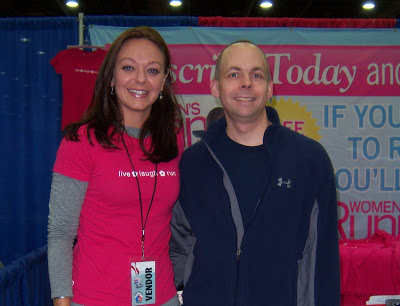 I am finally getting to this post cause the day back after a travelling race is always crazy. While this post is titled a “race report” I didn’t really, truly “race.” I must admit that I got a bit swept up in the atmosphere of the race at times and had to check myself, before I wrecked myself. Cause running too fast on a training run is bad for yo’ health. (Remember that song?

D and I got in to Detroit late Thursday night and were greeted with the lovely warm cookies at the Double Tree. I have to tell those of you thinking about running Detroit next year that you MUST stay at the Double Tree downtown. It’s a block or so from the start and finish of the race and is the PERFECT location. I Kid Rock you not. (He’s from Detroit. Get it?)

On Friday morning D and I set up the booth and got ready to meet all the fabulous runners picking up their packets. I work with Women’s Running Magazine very, very, very part-time and really enjoy it. We sold magazine subscriptions as well as cute pink tees, socks, and other running goodies. The magazine sponsors 4 women’s only half marathons and 5Ks with awesome medals. Head over to the site to see if one is near you. If not, make it a girl’s trip and head on down to Florida! (I’m an official pacer of the 2:30 group.)

I was pretty stoked on Friday because I got to meet Lisa from Early Morning Run. Unfortunately, our picture came out blurry and I didn’t realize it until I got home. Boooo! Fortunately, she was just as nice in person as she is in her blog. Yay!

I also got to meet the Detroit Runner, AKA Jeff. He was also very nice and this picture turned out well. At least I didn’t fail on this one. While he was at the booth, Meg O, stopped to say hi to him so I got to meet her too! Bonus meet-up!

On Friday at the expo, Red and Sun Runner showed up and carted us to the fabulous Greektown where we met up with Spike. We had a most excellent dinner and I mowed down some grape leaves. I had everyone try them and I believe Red was surprised at how delicious they were. If you ever eat Greek food, you must get them. Yum! 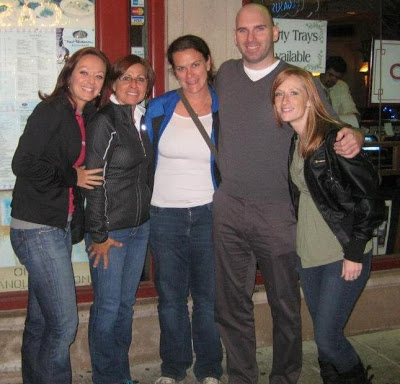 On Saturday morning, D and I did a quick 3 mile run on the hotel treadmills. It was yucky outside so we felt like the treadmill would be our best option. It was rainy, windy, and chilly. I wondered how this would play out for Sunday. Since Saturday was the longest day working the expo I prepared myself for the fact that my legs might be tight on Sunday. I also hydrated like a maniac and helped myself to carbo loading via Eminem’s (Ok, fine so I had M & M’s but since the former is also from Detroit, I felt the need to put his name in the post. How very Slim Shady of me.)

While at the expo I also met up with this guy… 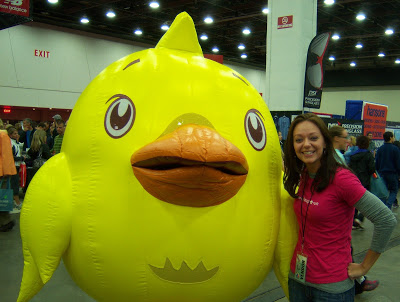 It’s the Deal Chicken! I had no idea what that was until I looked it up while typing this post. Frankly, I just wanted my picture with a chick.

After a long day of meeting awesome runners and selling awesome magazines, D and I headed back to the hotel for dinner and sleep.

On Sunday morning I needed to get in three miles prior to the race start to make my 16 mile long run. D and I got up a bit early and ran around the hotel to get in the miles. It was about 47 degrees but felt good and the $1 gloves we bought at the expo worked like a charm for those first few miles. Since we were so close to the race start we finished the three and stopped back in our room to deposit the gloves and hit up the restroom.

We then headed back down and lined up in our corral. My plan was just to keep it easy and run between an 8:45 and 9:00 pace. This did not happen because I got caught up in the race atmosphere. Of course, D left me about a half mile in and I didn’t see her again until we finished. She is a super strong runner and I really admire her.

For the first few miles I kept it comfortable and enjoyed the views. And then we hit the bridge. Holy crap this bridge is high. And it takes you up, up, up and then down, down, down into Canada. Once in Canada you run through a lovely park along the water. I really enjoyed this part of the run. And the Canadians were out to cheer us on which was nice. I believe someone said “Run strong, eh?” Just kidding.

The bad part about leaving Canada is that you must run through a tunnel to get back to Detroit. Eff that tunnel. Seriously. I hated this part of the race. You see, I’m fairly claustrophobic. I’m ok for a short time in small places but too long and I start feeling panicky. The tunnel was about a mile long and once you were in the middle of it, it got hot. And there was no breeze. And I was sweating like a pig. I started imagining every movie scene where people are trapped in a tunnel. All I could do was keep running and squinting trying to see that light. That light, literally at the end of this stupid tunnel. I did not like the tunnel.

Needless to say, we finally emerged from the tunnel and the cold air was such a welcome slap in the face, I almost yelled, “Hit me again Ike! And this time put some stank on it!” I’m sure others will say the tunnel was nothing, but I personally did not care for it. I’m A-OK with my wimpiness.

As we made our way back through the streets of Detroit I made sure to look around and see the sights. I had no idea what I was looking at but I always try to do this at races that are not in my own town. I high-fived a row of little cheerleaders and giggled when some older cheerleaders chanted, “Run, run, run, run, run, run! Everybody!” to the tune of LMFAO’s “Shots.” A runner next to me commented on a hill we were ascending since she was wondering aloud what I was thinking. “How many more hills in this race?” Heh.

We came to the straight away and it was nice to see the finish line straight ahead. I hate when races make you turn before the finish line and you can’t build up a sprint to the end. I picked up the pace and finished with a 1:52 and some change. I am happy that I stayed only a wee bit faster than I wanted to and I really enjoyed the race. The post race food and drinks were good and the volunteers on the course were super helpful. I don’t know if I’d run Detroit again, but only because I am a wimp in tunnels. Overall, the race was great!

I’m glad to be home but I have so many blogs to catch up on. Happy Tuesday!