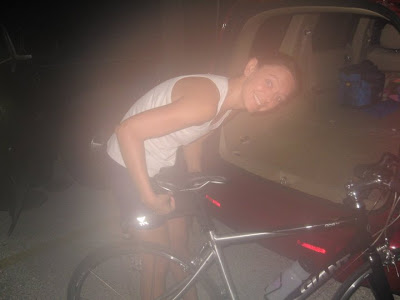 As I came out of the water I saw my friends and family and it pretty much ruled. I thought to myself “Hey, I’m doing a triathlon. Pretty cool.”

Then I thought,”Pick it up Sally, this is a race.” (I sometimes refer to myself in my head as other ladies names. It makes me laugh and reminds me to not be a Nancy. No offense to Nancy readers. Moving on.

I found my bike and noticed no one else on my rack had gotten to their bikes yet. Sa-weet. I definitely did better on the swim than I had originally thought while being pummeled by arms and legs. Don’t worry, this lead would not last long.

I began biking and the fear I usually have while riding was gone, my ridiculous slowness, however, was not. I got passed so many times I lost count. It was “On YOUR left!”, “On your LEFT.” “ON your left.” Everyone said it different, but they all meant the same damn thing, they were passing my slow ass. It was similar to the Seinfeld “These pretzels are making me thirsty.” Fifty different ways to say it and all the same idea. Pick it up Rhonda! And as they yelled, stuttered, breathed, and panted “On your left!” I thought about saying, “NO SHIT! YOU ARE ALL ON MY LEFT!”

On the bright side, I am pretty sure I passed at least one or two people. I think one was an old man whose calf read his age. He was 100. I felt pretty good about myself at that point. Not. As all of these women passed me from my age group I just kept thinking about not killing myself on the bike so I could catch them on the run. Or at least try to.

The only photo I got with me and the bike and possibly one of the few moments that day where I smiled with the bike.

I made it through the bike somehow and racked my bike alongside all of the people who had already racked theirs and were off and running. Of course as I started the run my legs didn’t feel like my own and I was wondering when they would show up. At this point it was hot but I was not going to walk no matter what. Let’s go Mary!
My friends cheered me on at the start of the run. It was awesome to see them all! 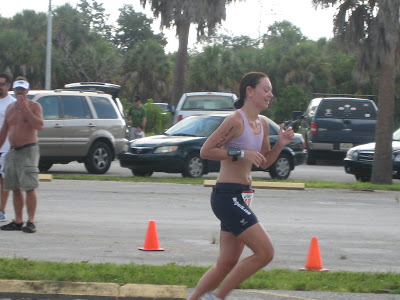 And off I go. Is it me or is that dude on my left checking me out? Yeah? Soak it all in buddy. Ha ha.

I started picking people off. I distinctly remember the outfits of a few of those ladies who dusted me on the bike but were now walking. Vengeance was mine. I’m coming for you flame shorts! I see you hot pink tri shirt! (OK, so I’m a little over the top with this part of the race, but I hated being crushed so much on the bike! Competitive much?)

As I got to the mile and a half mark my legs felt like mine again and I said “Hello legs. Nice to see you. Thanks for showing up.” When I hit the two mile mark the race folks had water AND cold, wet towels. Oh my God up in heaven was that delightful. I’ve never seen those at a race and it was the greatest thing ever. Thank you Top Gun folks!!!

With only a mile to go I tried to pick it up but was pretty tired so I just hit cruise control and kept moving. I was, however, reading calves like a mad woman, just to be on the safe side. They really should start doing this in other races. Then again, we’d all kill ourselves during marathons.

I started to see the finish line and my friends and family were cheering their fool head’s off. A good buddy jumped in with me and told me I had it and with that I used whatever I had left in the tank and sprinted the short bit left to the finish line.

Well, on the day of the race when I finished I thought “Gee, that was hard. I did one, I’m good. No more.” But of course now looking back I think I may need to do another one. I hope that makes sense. I definitely encourage anyone who has an inkling to compete in a tri to give it a go. It’s worth the training because it’s such a different experience than just the run.

And now for what you all really care about – The Stats –

My co-workers made this finish line for me on Monday cause they all knew I had this race. They knew I was nervous about it so they set this up for me before I got in to work. Good times. (Had to block the company name to protect the innocent and employed, me.) Don’t be jealous of my sweet cubicle. 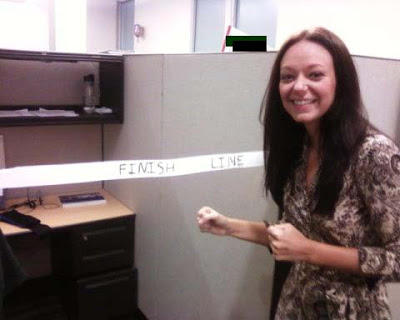