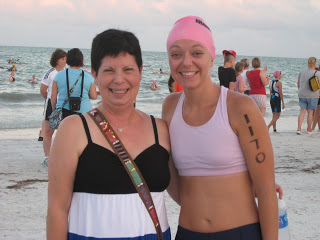 Let me start by saying that I must really like you guys, cause these are some pretty unflattering photos I’m going to post of myself. Furthermore, I’d like you all to know that triathlons are hard. I didn’t expect easy-peasy-lemon-squeezy, but damn am I sore! That being said…I FINISHED MY FIRST TRIATHLON! WOOT!
On to the report. As always, my apologies but I have no choice but to split it up. It’s long as hell.

I followed Little J over to the race start and we unloaded our cars in darkness. I was super nervous during the drive and blasted the Beastie’s to get some support. I had the nervous belly like nobody’s business and it only got worse as we pulled in to the packed parking lot. Little J had already picked up her packet so I was off to grab mine.

I learned a very valuable lesson at this point. Always get your packet for a tri the day before. With all of the setting up, it’s a little crazy to get the packet and get your gear stowed. Let me splain.

I headed over to get my packet and still really had to use the restroom at this point but I waited in line and got my packet. I then headed to the bike area and had no idea where to go. I stopped next to a group of spectators and one said, “You need your chip to get in the bike transition area.” Oh crap. Where is my chip? It’s not in the packet. What the frack?

So I ask these random folks to watch my bike as I head back to the packet area. Still gotta poo, not gonna lie. I get to the packet area and they say “No, you have to head back to where you were and get your chip.” Ugh! I start heading to the transition area and decide I must use the restroom before anything else can happen. Stand in line. Wait. Wait. Wait. And sweet relief! Moving on.

Finally I get my chip, from Speedy Jess who is volunteering (she was like a ray of light at this point, I was so stressed!) and get markered up and head in to the bike area. What the hell do I do here? I find that my bike rack number corresponds to my number. I get to the rack and must have looked like a deer in headlights at this point because a woman next to me was so helpful. Thank God for her. She also gave me some water because like a dope, I had left mine in the car. Rookie.

I eventually get everything set up and head to the swim start. On the way I run in to my peeps from the running group and we all get ready for the swim.

My stepmom, my dad’s best friends, and lot of folks not competing from the running group came out in support and it was great having them there.

Me and my stepmom. Tres chic pink swim cap, no? Pink caps were for ladies 20 -34. How nice of them to give us pink. Totally matched my top. 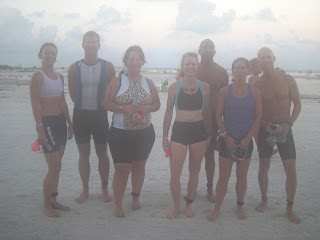 Members of my beloved BRA running group. Don’t worry, there was something on the lens it wasn’t smokey outside or anything.

My group went last so I was basically just wandering around for a bit before the start. I didn’t feel too nervous at this point and I was just ready to get going.

I made the mistake of lining up in the middle of the swim pack toward the front. Holy crap was that a bad move. As we took off it became a veritable free for all. I got kicked, hit, bumped, and pushed. It sucked. I finally made a move to the middle of the front but just couldn’t get into a rhythm because of all of the ladies around me.

It was a quarter mile swim and I’m not thrilled with my time, but I made it out of the ocean and headed to the first transition but not before I had to wade through random stink water. For some reason, I assume due to tide, there was a random pool of water with what I can hope was seaweed and kelp at the bottom as it felt like squishy, gross things. See the last photo as evidence. Also please notice the look on my face. It’s priceless. I’m pretty sure this is where I told my family “That was hard!” 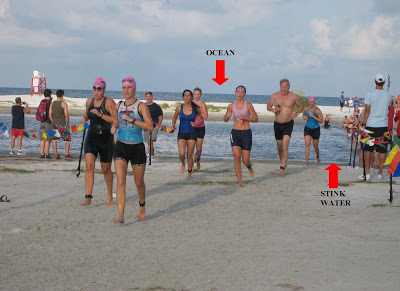 To be continued…(I’ll make it a two-parter. Don’t worry, it’s almost over.)