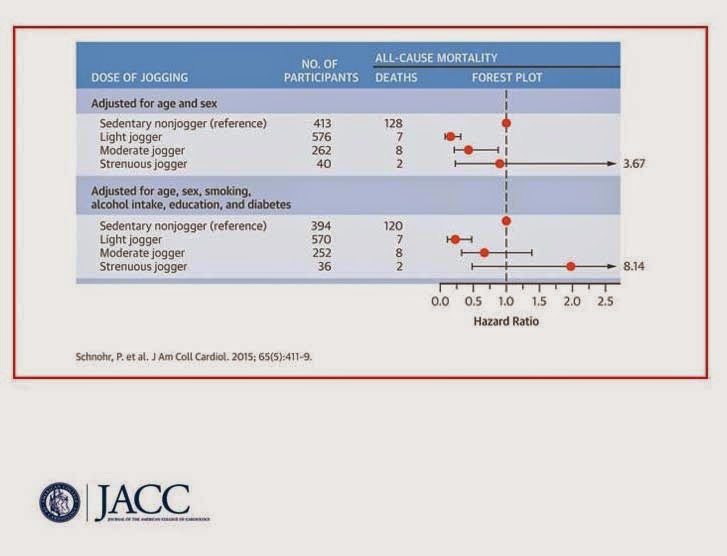 Yesterday, my coach posted an article in our group about a study* that said, in effect, running less is better for you and running too much is actually a detriment. You can read that article HERE. I glazed over the article because I am not going to quit running or start running slower because of this new study. And I seriously doubt many other runners would do the same. I feel like running always gets a bad rap. From people saying it’s bad on your knees to old timers who say a woman’s uterus will fall out, running just can’t seem to win.
Again, I shrugged this story off and went about my day.
Then today, a friend who reads my blog (like anyone else reads this) shot me a text to see if I was going to blog about this research. Actually, he begged me to. Kidding, C.R.! I was actually thinking about a blog post for today and after doing my own “research”** I became more interested in the study.
First, I found the actual study and read it for myself. Man, was that boring. (But thank goodness there are folks out there who want to do these things.) They concluded that “strenuous joggers have a mortality rate not statistically different from that of the sedentary group.”  Interesting.
The study followed 1,098 healthy joggers and 413 sedentary, but otherwise healthy, nonjoggers for a 12 year time span. In just looking at the numbers, it does show that the death risk is lower in the “light joggers” versus in the “sedentary nonjogger” group. And, the death risk goes up in the “strenuous jogger” group. Seems like we should all start running less, doesn’t it?
Let’s look at the numbers via the summary of the trial results:
Since I am no scientist, I wanted to delve into the study a bit more and found a few articles that don’t believe the study to be the end all of the running too much debate. I’d like to point out that many of these articles were from people or sources who are, for lack of a better term, pro-running. This would lead me to assume that they are looking for ways to diminish the parts of the study that say “don’t run too much.” Duh.
The two best articles from the pro-running camp are from Runner’s World (RW), February 3, 2015, and Oustide Magazine, April 2014. The RW article let me know that this data has actually been around since 2012! There’s a really in depth look at the study from the same RW author back in April 2014, HERE. According to the newest RW article:
According to Alex Hutchinson’s article from back in April 2014, he does concede there is a place where too much running is not a good thing.
That’s all well and good because it’s coming from a writer who works for Runner’s World. Of course they’d want to debunk the whole “marathoners just as fatty as couch potatoes” statements. But where are the other scientists who disagree with that? Enter an unlikely source: Forbes.
In an article written yesterday by Larry Husten for Forbes, he backs up most of what the RW article states. Husten is a medical journalist and from what I can find, he may not even be a runner. Granted, I didn’t search for race times or anything, so he very well could be, but it seems he’s fairly objective. Husten also says, “Now it is reasonable to propose that moderate exercise may be preferable to strenuous exercise, but it is also entirely possible that the opposite is true.”
Again, I’m no scientist but it would seem that this study isn’t conclusive and it would appear that a lot more needs to be researched in order to find out where the line is that pushes us from healthy runners to unhealthy runners. I personally don’t see this as an indication that I need to stop running. I do think adding in strength and cross training are great ways to mix it up as a runner and not over tax the heart every single day.
*Thanks to the authors of all of the articles and the study itself.
**I read some articles and the study and came up with my own opinion and conclusion. I’m not a doctor or a physiologist. I’m just a gal who likes to run. A lot.