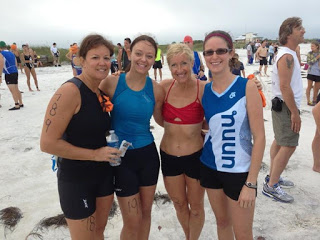 As I sit on the couch typing this, I still can’t get over what a strange racing experience experience I had today. I’ll publish this post tomorrow morning after I have had a good night’s sleep and hopefully sweet dreams of triathlons finished and tires that never go flat.
You see, this triathlon today was my return to the sport that I hadn’t really prepped or trained for. Sure, I’ve been running but I’ve only been swimming and cycling here and there and I suppose I didn’t pay the tri Gods enough respect. I knew it too. Saturday night I was not really feeling like racing at all. My triathlon confidence was a bit low and having run my long run on Saturday morning I didn’t know if I should even toe the start line. A few friends I consulted told me to race easy and have fun. Deep down, I knew I didn’t really want to do that. I was torn between really wanting to race and knowing that I hadn’t trained as well as I could have. So, I grumbled about it Saturday night and packed up my tri gear anyway.
Upon waking this morning (Sunday), I still felt off. I tried to shake it off, and oatmeal and Lloyd snuggles helped. The S.O.  also kept me focused as he packed the car and got us out of the door. We hopped in the car and with a turn of the ignition key, it didn’t start. Crap. We were literally right on schedule, this would put us back a minute or two. The S.O. and I quickly jump started his car with mine and as we were fumbling with the bikes on the back, we realized I had a flat front tire. Double crap. The S.O. and I were like a NASCAR pit crew at this point. He did all of the heavy lifting and I darted around helping where I could. After the jump and tire change, as fast as the S.O. was, we were dreadfully off schedule.
As a back story here on me and being late…I hate it. I have what I call “late anxiety.” With the exception of just flat out forgetting a meet up (Ahem KC), I am always early. It’s nerdy, I know, but I just cannot stand being late. I get crabby and annoyed. And I hate to admit it, but I’m not that pleasant to be around when I’m having “late anxiety.” This morning, I did my best not to be a jerk as I was climbing up the walls of my insides as we hit every single red light on the way to the race start.
We got to Honeymoon Island, the race destination, and had little to no trouble parking. We quickly grabbed our gear and I began to pump my back tire. When I removed the pump, the valve hissed loudly and kept releasing air. I had seemingly broken the stem. Son of a b! Fortunately, we knew our favorite bike shop was a sponsor and our buddy would be there helping with pre-race bike issues. I felt a little better as we walked to transition. I bumped into my friend Julie and we told her about our adventurous morning.
This sense of relief would turn to panic as we approached and heard, “Transition will be closing in three minutes!” I almost threw in the towel here but the S.O. told me not to worry. He was going to get me in transition if he had to track down the race director. We found the bike tent, and the mechanic assured me he’d get me in transition. He could probably see the panic written all over my face.
Fortunately, the mechanic changed my back tire and the S.O. had gotten into transition and eventually, so did I. The bike rack was jam packed and I was one of the few late folks they graciously allowed into transition. I will be forever grateful to this Race Director and bike mechanic. The volunteers in transition were super helpful and very kind as well.
I finally walked down to the swim start and found myself laughing at the morning’s events with the S.O. and our friends. It has been quite the start to our day. Shortly after, I was lining up to start the quarter mile swim and looking at the waves of swimmers in front of me who were part walking, part swimming, and part dolphin diving. Let’s just say, this was a very shallow swim.

I swam as fast as I could and did some random dolphin diving and have no idea how long it took me. The race doesn’t have a timing mat as you exit the water and I have no clue how long it took me to run to my bike. I forgot to look at my watch until I was about a mile into the bike ride. Oh well.

Speaking of bike ride, I had no trouble finding my bike in T1. I slapped on my shoes and helmet and headed toward the mount line. As I went to mount I noticed my chain hanging loosely off my gears. I’d been here before. This, I knew how to fix. I jumped to the side and started to pull my chain back on when a familiar face grabbed it and did it for me. My friend Mike was in the right place at the right time for he surely did it faster than I would have. Thanks Mike!
I rode out and noticed how narrow the course was. The usual “on your lefts” were heard as speedy guys and gals with fancy wheels zipped by me. I didn’t get passed by anyone who didn’t look like a “cyclist” though, so I was feeling pretty good. I headed up and over the second small bridge and made the turn around back. The Iron Goof, Brad, said hi as he zoomed passed me on the way up.

This course is a 13 mile ride which consists of two loops. At this point I was at about mile four. This is where I noticed it. Another effing flat tire on my front wheel. For those of you keeping score, this would bring us to a total of THREE flat tires.

I sighed and pulled over. I was afraid to go back over the first bridge, not knowing how to handle a bike on a flat front tire. I pondered filling it up again but then started to think there was something wrong with it for it to go flat again. If I filled it up would it just flat again as I started the second loop? I walked it about a half mile, there was no SAG in sight. It didn’t appear one would be coming either because, again, this is just a super tight course. There would be no room for a car or motorcycle without being more of a danger than an aid.
I walked up to a man who just happened to be out cycling for the day and had stopped to watch the race. I told him I didn’t know what to do. I truly didn’t. He offered to help me change it because my only option was to ride it back and risk it going flat again or walking it the two miles. Blech. I had never used the CO2 cartridge before so thank goodness this man just so happened to be standing around. I will say this for this triathlon, there was no shortage of people willing to help me. For that, I am truly thankful.
As he showed me how to use the CO2, we checked the tube and wheel well for anything sharp. We checked the rim and we even checked the tube we removed which had gone flat. We couldn’t find a thing. All the while, I was aware of the time slipping by. My sweet friend Jessica rode by and yelled, “Oh no! Oh Beth. I’m so sorry!’ My hilarious friend Cheryl, who knew about the AM flat tires, rode by and yelled, “Jesus Christ!” It made us laugh. I also got a few shouts of folks inquiring if they could help. Again, lots and lots of helpers out there today.
With my third flat tire filled, I rode back to transition with a frown and the thought that I could still finish and not take another DNF. I weighed my options on those two miles back. Mentally I was pretty defeated. I had spent so much time walking and changing my tire that I just really didn’t want to ride another loop. I could have finished and gotten my medal but I just wanted to be done. I was over bike issues and I certainly wasn’t having fun. I think had this been a longer race I would have kept going but  I decided to listen to my gut and call it a day.
I racked my bike, turned in my chip, and went to find the S.O. I was sad the time I got to transition and then found the S.O.  and then I was over it. As soon as I saw him and told him about my decision I felt better. It was kind of like telling someone about a nightmare. After it’s out in the open, you feel so much better. And as much as I hate another DNF, I don’t really feel too bad about this. It wasn’t my day and I’m ok with that. It’s not a decision everyone may have made, but as my dad always told me, “You make the best decision you can at the time. You can’t stress about it after it’s done.”

The day wasn’t a total loss because the S.O. finished 2nd in his age group, which is a first for him in triathlon. He’s in a very competitive age group and I was thrilled he did so well. We had a great post race party with our friends and I drowned my flat tire “sorrows” with beer and pizza.

I also learned a few things today. I learned, of course, how to change a flat tire with a CO2 cartridge. I learned that being on the receiving end of random acts of kindness makes me want to return the favor ten fold. I learned that dolphin diving is faster than walking. And I think most importantly, I learned that sometimes quitting is ok. I know the whole “quitters never win” thing but I gotta be honest, today was a day that quitting felt right. Don’t worry though, I won’t make a habit of it.