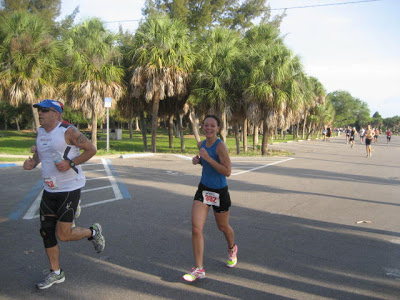 First let me start by saying that I finished! Hooray! Not that I didn’t think I’d finish going in but there was a brief moment during the swim where I questioned it. I’ll break it down into the Good, the Bad, and the Ugly. Since they don’t go in the same order of the tri I’m gonna flip the script to make it fit. Just go with, mkay?
Pre-Race
As I got ready for my race on Saturday morning I came to the realization that triathlons require a lot of stuff. From the bike, to the two pairs of shoes, to the helmet, goggles, and glasses these events require a packing list. I learned this at the event when I realized that I forgot my camera. Thank goodness Lazy Runner showed up with his. I also learned that you need to arrive at the race very early, regardless of your start time because they close the transition area. I made it in time, but it was a nail biter. (They shut the transition so that those starting don’t have folks in there still setting up. And tri’s start in waves by age group. Just FYI to some who may not know this.)
From last year I knew how to set up my bike and other race gear in the transition area and was really happy that I could help a first timer who was having some difficulty racking her bike. I got to pay it forward cause some woman did the exact same thing for me last year.
The Good (bike, 10 miles)
Me and Dolly got on pretty well yesterday. No falling, even though the clipping in and out was shaky at best due to nerves, I still didn’t fall and even got a little speed. I definitely need to work on my shifting cause methinks I was in the wrong gear for about 5 miles. Heh, FNG (effin new guy).
I did get passed more than a few times, but mostly by folks who were straight hauling ass. They were on their super speedy bikes and I didn’t feel bad since no one had a basket and a small dog with them as they went by. I passed a few folks here and there this year and finally got to say “on your left!”
The Bad (run, 4 miles)
The run, as in bad ass. I am not one to toot my own horn, but toot mutha’ effin’ toot. I felt GREAT on the run. The first mile is always a bit wonky as you get off the bike but for some reason my legs just felt good. I caught a lot of people and I was in a full on kill mode to catch those who passed me on the bike.

A very cool thing I noted about the tri is that a lot of other racers cheered me on as I passed them. I think that’s totally commendable to cheer on someone while you are “racing” them. I’ll be sure to cheer on those cyclists at the next race when they zoom by me.
As a note to other runners out there, this is where we excel. Get through the swim and the bike and then you are back to YOUR sport. Yay for running!
The Ugly (swim, 1/2 mile)
I consider myself a swimmer. Well, make that a runner-swimmer. I am not normally too concerned with the swim. The exception of course is yesterday. It was by far the hardest part of this race. The water looked deceptively calm while waiting to run in but once I got swimming it was a churning, wave-y sea of death.
Every breath I took seamed to get me a full face of water. And every stroke seemed to run me into someone. When I tried to sight (it’s looking up every few strokes to make sure you are going to the right way) I was lifted and tossed by waves. I got about half way and had to stop and do a few frog kicks and catch my breath. It was brutal. I had to remind myself, “Hey you’re a swimmer. What’s going on here? Swim!” I finally re-grouped but I wasn’t as strong as I should have been.

Since I am new and didn’t wear a watch for anything but the run portion of this event, I have no idea what my splits were. I’m guessing ok for the swim, ok for the bike, and good for the run. Overall my time was 1:24 and I came in 8th in my age group. Not bad for a 2nd time triathlete who was painfully slow in transition. I heard a tri coach I know yell out “Hey B! The race has started!” LOL. I’ll work on that. And thus ends my race report.