Eye of the Sloth 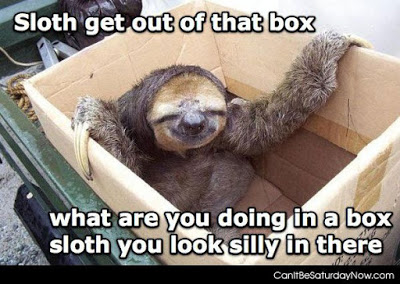 In 2013, I raced in a small, local sprint tri and for some reason when I got to the run I just didn’t have the desire or will to push it. I didn’t run my hardest and I waved hi to friends as we passed each other and when I saw the S.O. he told me to karate kick and I yelled “HI-YA!” There is photographic evidence in that post.
After the race we were discussing my lack of “Eye of the Tiger” and the S.O. dubbed it the “Eye of the Sloth.” This made me laugh and it’s been a phrase we use every now and again.
Some races are just like that for me as I don’t always have the fighting spirit that some of you seem to have endlessly. Some days I just don’t feel like killing myself and I’m perfectly OK with it. (Some days I want to push it and just can’t, which I am wholly not OK with, but that’s a whole other post.)
Since I am heading to Grandma’s Marathon next week and would like to have some of that fighting spirit, despite my injury plagued training, I’m planning on bringing music with me. You know, for a little extra oomph. Normally, I don’t run with music. I run in the dark early and with people most of the time so we chat or I want to hear if Jack the Ripper is coming behind me. I also think it can be dangerous in a race if you have it on full blast and don’t hear emergency vehicles and/or wheelchair athletes trying to get by. I plan to run with my volume low. (For the record, Grandma’s Marathon discourages this, but it’s not banned completely.)
I have an ipod Shuffle that I like to use on the treadmill because it’s small and I’ve only loaded songs on it that I enjoy running to. I prefer songs that are up tempo, the faster the better. I don’t like songs without lyrics, dubstep, or EDM (is there no longer a “techno” category? I’m old.) I’m sorry but those genres make me feel a little bit like I drank a Redbull with Pop Rocks and followed it all up with 17 No Doz. Too hyped to run an even pace.
I know a lot of you run with music so I’m asking for suggestions. I’ll share the playlist once it’s created over the weekend when I hear them all. I’m excited for some new tunes and marathon number EIGHT!