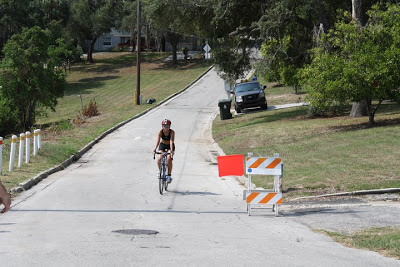 Since, yet again, I have a lot to get through on this race report, I’m going to dive right in. Get your popcorn ready and settle in.

On Saturday, the Tri division of my running group headed over to Clermont, FL, which is about 25 miles west of Orlando. If you google Clermont you’ll see that it’s geography notes it’s “rolling hills.” Keep that in mind.

A few of us were doing the Olympic distance (this includes me), a few were doing the 1/2 Ironman distance (or what they call the “long course”), and one (Cay-See) in our group was doing the duathlon. We headed over Saturday afternoon and checked into our hotels and then drove the bike course.

Driving the bike course, I felt ok. I thought the hills looked manageable except for the first one which just had no downhill to build up to it. You turned off a straight road and went straight up. Yikes! I was a bit concerned about getting lost on course since it was such a small race and the start times were still up in the air. It seemed to be unorganized on Saturday, but worked out just fine on Sunday.

I felt prepared for this race and tried to give myself positive pep talks and keep that “good to great” frame of mind. And when we got going on Sunday morning I didn’t feel the panic that I had encountered before St Anthony’s.

The Swim – 1.5K (.9 miles)
This was my first lake swim in a race. And I must admit that I really enjoyed it. It was the full 1,500 meter swim and sort of a triangle shaped course. I lined up in the front at this race and it seemed to pay off. Out of the 38 women who started the race, I got out of the water in 8th. I felt a little more winded then I normally do but I was happy with the swim. The only downside to the swim was getting off course on the way out to the first buoy.

Here I was swimming along and then all of the sudden I saw no other swimmers and for a hot second I thought, “Am I in first?” Haha. When I popped up I noticed I had gone pretty far off course and was in the middle of the course. Oops! I guess I need to work on my sighting a bit more.

Transition 1
Not terrible, but could always improve.
T1 Time: 3:25

Remember that first hill I told you all about? Yeah. It got me. Only about 4 miles in and I was slowly climbing and I could not get my legs to turn over in the pedals. I had to stop. I unclipped and started sliding back down the hill and thought for sure I was going to bust my ass but I managed to hop off the bike. I stood there for about 3 minutes as folks passed and thought, well there goes my swim lead…again. I also thought about walking up this hill. And every other hill in this almost 25 miles and the thought of walking up hills for 25 miles sounded daunting and miserable.

I quit right then and there. Pardon my inner French, but “Fuck it.”

As I turned my bike around and started to walk down the hill I heard a very forceful, “Don’t you walk down this hill!” It was an old friend He asked me what I was doing and I told him I physically couldn’t get up the hill and was quitting.

He said, “Oh no you aren’t. We’ll walk up the hill. I’ve done it before and it’s all in your head. Plus you are in the wrong gear!” I babbled and whined and my voice cracked, “But I can’t do this for 25 miles! You don’t understand! I don’t want to walk up all those hills!” He told me I wasn’t a quitter and to just walk back up with him. I felt awful. Here he was, stopping on a bike course he could easily crush, to help me.

Once we got to the top of the hill he told me to gear down and get going. He made sure I was back on the bike and moving before he got on his. And wouldn’t you know, by the next hill I could climb, slow as shit mind you, but I didn’t have to walk up another hill for the rest of the race. He passed me like I was standing still, but at least I was moving.

I peddled on and at about a mile from where we had walked I saw the same old friend stopped on the side of the course. I yelled, “What do you need?” He told me to keep going, that he was fine. (He told me later he didn’t want me to stop for fear I wouldn’t start again. Hahaha!) So I kept moving.

I climbed more hills than I can count and cruised down them, which I must admit is pretty flippin’ fun. Scary? Hell yeah! But fun too. Tiny Tish was racing too and she caught up to me on the bike. We took turns passing each other and it was great to see her on the course. It helped me a lot. We came up to the water station and I hopped off to get my bottle. No way I was going to risk the sharp turn around and get a water while still clipped in. Oddly enough though, he had not caught back up to me yet and I knew something was wrong.

As I headed back toward the lake, the course sent you around the lake for the most part but had to take you away from it to get all of the miles in, I saw him sitting with no shoes on, as calm as could be on the side of the road. I stopped and asked him what happened and he told me his chain broke. I felt so terrible for him. Here he was stopping to get me going when I wanted to quit and he himself would now have no chance to finish. He told me he’d be fine as long as race official drove by and to get going. And so I did.

The miles ticked by slowly as I climbed more hills. I noted that at my slowest climb I was going 5 MPH and at my fastest downhill I was going 26 MPH. I couldn’t believe how fast I went flying down some of the hills and the steeper ones leading into right turns I rode my breaks until they were squealing.

Tiny Tish and I continued to leap frog and talk as we passed each other and another gentleman in a neon green shirt told me to keep going when he could see me struggle. He and I leap frogged as well. At one point he said, “I’m not looking forward to the run.” And said, “I am! I can’t wait to be off this bike!” And I meant it. On the plus side, the ride went by quickly because of the hills. I had to focus on what I was doing and tried not to coast too much.

I finally reached the transition and almost cried when I saw the bikes set up cause I knew I’d be dismounting soon. The course official at the dismount said to a rider in front of me, “Run your bike straight through to transition.” And then we he saw me crawl to a stop and slowly get off my bike he said, “Or walk your bike straight through to transition.” I laughed with him and some spectators and made my way to my bike rack.

Coming into transition. You see a final small hill behind me and a smile of relief on my face. 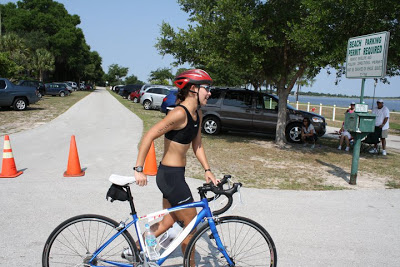 FINALLY off the bike and headed to my happy place, the run.

Transition 2I was pretty slow in this one. But I didn’t care. I forgot to start my Garmin when I got into transition so I chose to run without it. The bike had kicked my butt and so I laced up and ate some Clif Shot Bloks and off I went. Did not forget my race belt with my number this time since I did that last race. Hooray for lessons learned!
T2 Time: 3:21

The Run – 10K (6.1 miles)By the time I got off the bike, it was HOT. Since I didn’t have my Garmin on I wasn’t quite sure how fast I was running. I would have liked to have it and will remember this for the next race. The run course was an out and back and had ample water stops. They also had cups of ice and two water hose stations. The second time I hit the hoses I said, “Hit me again!”

I walked through the water stops and tried to keep it moving on the run. I was sweating buckets and just kept thinking about the finish line. As I headed back toward the finish after the 5K I knew I was home free and that I owed a lot to my old friend.

At one point I saw the man in the neon green shirt from the bike and he said, “I knew you were a runner,” to which I replied jokingly, “Yeah, you could tell by my shitty biking!” Then we both laughed.

I caught up with a man named John who had recently joined the running group. I don’t know him too well but I saw he was walking and I slowed up and told him to run with me. Since I got helped, I figured I would try my best to pay it forward. He started running with me and we stayed together for another half mile or so. Truth be told, helping him keep moving, helped me keep moving. He was dehydrated but I knew he would finish. He told me to go ahead and so I trucked along and could see the flags at the finish. I pushed a little and heard my spectating friends cheering. The Lazy Runner came out and took all these photos you see and so did fellow running group member Chris-Brian.

I wasn’t running as fast as I should have but my legs were spent from the bike and I was hot. My “good to great” had gone to “ok to fine.” Haha!

I got to the finish chute and have never been so relieved to finish a race I thought I might not get through. 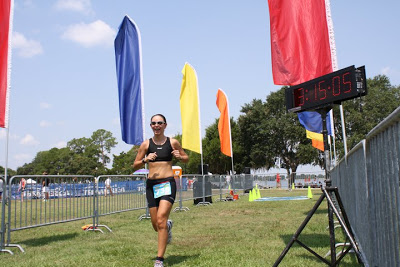 Coming into the finish and smiling – so ready to be done!

Final Thoughts
Were it not for friends on this race I would not have finished. I don’t know who was looking out for me but I definitely needed my buddy at that exact moment I gave up.
I have never wanted to quit a race but because I physically felt I couldn’t get up those hills and then I just mentally gave in. This is a first for me but as I have learned yet again, every race is a chance to learn and grow as an athlete. I’ll be headed back to the drawing board on my “good to great” mentality and keep on trucking. 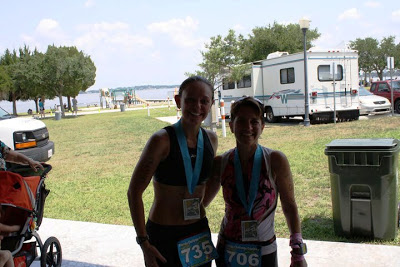 Me and Tiny Tish with our medals. She did great and was a huge help on the course.

Final Stats
Total Time: 3:15:06
3rd Place in my age group! Woo hoo! (Did I mention there were only three in my age group? I’ll still take it! Plus I am patting myself on the back for being first out of the water amongst the three so there!)
27th woman out of 37 women.
70th out of 91 competitors