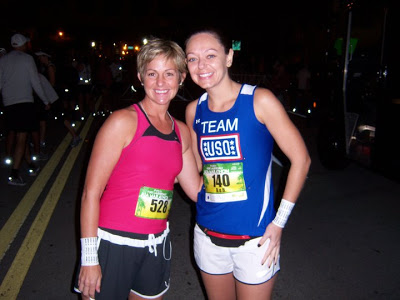 The pre-race road trip and pasta dinner with Cute K and Caribbean Steve was a total blast. We talked a lot on the way down and thought the scenery of South Florida was gorgeous. The race expo was at the Galleria Mall which made me very happy since really all malls are like my second home. The goodie bag and expo were both on par. For a small race, they did a great job of setting up a good expo with lots of free swag. After the intimidating mass of people at the Marine Corps Marathon, I gotta say I much prefer the smaller crowds.

Caribbean Steve wore my sister’s race number since she didn’t get to go down to Ft Lauderdale with us, but don’t worry he didn’t actually race or she probably would have won her age group. Haha. Also since my sister’s new last name is now very Irish, Caribbean Steve was the darkest Irish man I’ve ever seen.

Cute K and I had decided to set our sights on a 3:50 marathon. We both felt we could hit that goal and for her it would mean a Boston Qualifying time. I knew going in that this would be Cute K’s race. She was running so strong during our training runs and blowing my doors off at the track.

The morning of the race I was a bit nervous. I decided I would take a caffeinated Gu the second I woke up to get things moving, if you know what I mean. Cute K and Caribbean Steve and I head to the parking garage and got a bit lost on the way there. I was pretty panicked at this point but we figured it out and had time to hit the porta-potties before the start. The Gu did it’s job and I was much more relaxed with that issue out of the way.

Cute K got me all worked up again cause she thought she mixed up her electrolyte caps (eCaps) with her sleeping pills. They look just alike so she had to compare them with mine and even taste them to make sure they were the right pills. This was hysterical to me and something I’ll never forget.

Pre-race me and Cute K. Check out my Team USO singlet!

As the race started I felt good. I was trying to stay calm and stay on pace, which are both hard for me. I knew we had to speed up a bit to make-up for the sluggish first mile due to the crowd but I was worried about bonking at the end. Cute K was wonderful at that. I’d push a bit too much and she’ll pull me back in. We both had pace wrist bands with big huge lettering and a saying we selected. Since I was doing my Team USO fundraiser I chose something that my friend Tam, who is in the Air Force, always told me when we ran together, “One foot in front of the other.”

The miles progressed and I was feeling, oh how shall we say this, less and less chipper. I was fine until about 15 or 16 and I just started feeling like I needed to focus and didn’t want to waste more energy talking. Cute K was just as bubbly as ever and I could tell she was feeling great. She went to put on her tunes and her iPod wasn’t working so she was really looking forward to seeing Caribbean Steve at mile 18 since I wasn’t really a bundle of laughs at this point. Hey, it happens.

We hit 18 and didn’t see him in his high-lighter yellow shirt. Cute K was worried. But then, like a ray of sunshine – there he was. He was hootin’ and hollerin’ and had made friends with just about every single person we passed, runner and spectator alike. He ran with Cute K for a bit and then fell back to chat with me because at this point Cute K and I needed to part ways. She was on fire! I was on cruise and officially in the “bite me” zone.

As I watched Cute K zoom off I wondered if I could maintain for the final 6.2 miles. I oscillated between “I hate this” and “Stop being such a pansy ass. You aren’t fighting in a war, you can do this.” It was hot and I was tired. I had dropped the pace down to an 8:30 but I was struggling.

Thank GOD for Caribbean Steve. He was saying and doing all the right things as a pacer. He tried to get me to visualize a four mile route we run a lot when I hit the 22 mile mark. Although when he mentioned the tennis courts coming up I literally thought he meant tennis courts. Oops. Damn marathon brain. He ran ahead and grabbed my water and he even promised to buy me ice cream after we finished. I am not sure why he did this since I don’t really like ice cream all that much. But I did find it helpful since he’s pretty cheap so that was an extremely nice gesture. I mean come on, you all saw his busted old flippy floppies. Heh.

We got closer to the finish and I kept asking him where the damn finish line was. It was very hot at this point. We were running along the famous A1A, which while beautiful, offered no shade and no breeze. He said, “Oh, I see it. It’s right up there.” Liar. He didn’t see it. He told me this after of course, but again, such a wonderful friend to lie to me at this point. I never needed a lie like I did at mile 25.

I managed a final surge at the end when Caribbean Steve prompted me to pass some dude. Heh, sorry dude, but thanks. And I also managed a big smile as I crossed the finish line. It was hot, I was spent, but damn if I didn’t hit my goal. My official time was 3:48:04 and that made me 5th out of 37 in my age group.

This marathon felt different than the others. I had a hard time enjoying it from about mile 16 on. I’m pretty sure that I put too much pressure on myself and made it “work.” I feel bad that I just couldn’t be more fun with Cute K. It was just one of those things. She had a kick ass race and got that much deserved BQ with about 6 minutes to spare. To say I’m happy with my nineteen minute PR would be an understatement, I’m thrilled. The post race festivities were pretty awesome. They had tons of free drinks and food. It was so nice to sit in front of the ocean on such a gorgeous day. We made friends with a few first time half marathoners after and that running camraderie never ceases to amaze me. I’ve said it before and I’ll say it again, the running community is a wonderful group of people. 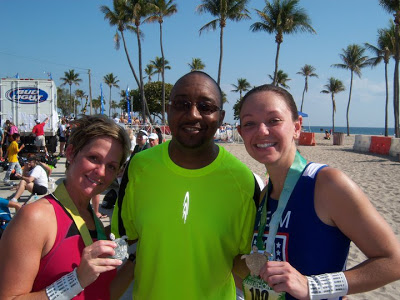 Moving forward, I think if I decide to chase that BQ I will probably have no choice but to run alone. For now though, I’m going to switch my attention to the 5K, 10K, and the *gulp* triathlon.
Thanks for reading, oh and HAPPY BIRTHDAY TO ME! I am the ripe old age of 31 today. Five marathons under my belt before 31…life is good.