Happy Monday folks! I had a fantastic weekend of racing in what can only be described as schizo weather. I love the Gasparilla races! There are four races in total: 15K, 5K, 1/2 mary, and 8K. Since these races are the equivalent to a big running party, I had a total blast!

I headed to the expo on Friday, and as always, it was a good one. I found a new brand that I fell in love with and am hoping to do a give away with them so stay tuned for that. I also picked up this sweet container from Publix for salads. It’s basically a plastic container that has the dressing cup and fork attached. It was a hit amongst a lot of my running buds too.

This was my first time racing the 15K distance so it was an automatic PR. However, it was not a good race for me. It has officially been decided that I am not good in the heat. I was thinking about my dad after his motorcycle races that were particularly hot and I remember him being miserable too. Must be genetic.

I have also decided that I am an idiot when it comes to rethinking my goal at the start line. I am so focused on the time that I have in mind that I never factor in the weather. This equals going out at a way too fast pace and bonking at mile five. True story.

The high on Saturday was 82 and the angry sun was so angry. I admit that by mile 6 I started walking through water stops. And then I just kept taking walk breaks. Fortunately for me I had a buddy out there doing the same thing and we decided to just stay together to get through the finish line. Yes, those are “thumbs down.” Heh.

I somehow escaped being snapped with the barf face I had on for about the last 4 miles with the exception of the finish line photo which has the PROOF going right through what appears to be a major “don’t puke and pass out” face.

Basically my goal of 1:14 went right out the window and I wound up running a 1:21. Whatevs. It’s a PR and I’ll happily destroy it next year if the weather gods smile on me. If not, I’ll just reign it in at the start and try not to piss off the angry sun.

Right after you finish, you are herded over a small bridge down into a tunnel to get your food and beverages. This photo was taken right as we got into the tunnel. As evidenced below, my face is a big, round tomato and the three of us are so sweaty. Thanks again for the company JB and great job Mike G! 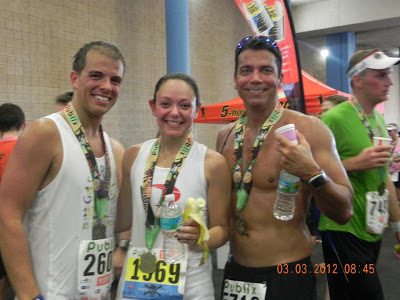 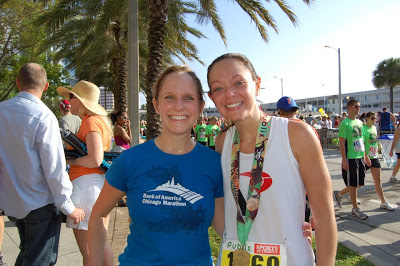 Still sweating after getting back to our meet-up spot, a BIG thanks to Speedy Jess for coming out to cheer and run some of us in. She knew I was hurting when she saw me walking. It’s always good to see a friendly face at that point of any race. You are awesome lady! 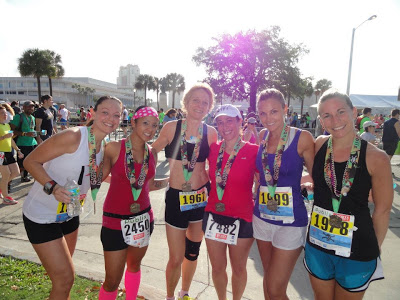 From left to right: Me, Kiki, Hollster, P-Funk, The Reporter, and Kris10. Congrats to Kiki on her first ever 15K and longest race yet! And congrats to all the 15K racers!

The back story on the 8K is that I had this great idea that me and the 8K ladies would dress up and run as pirates. Gasparilla is a pirate themed event so it only made sense. I sent out the email and got two co-pirates on board. (Pun intended.)

Sunday morning when I arrived to watch the half marathoners I wore some warm up gear because while Saturday was HOT HOT HOT Sunday was rainy and chilly. My co-pirates were also in warm up clothes. Or so I thought…

We cheered on the half marathoners with a sign I made that said “Run for the booty!” I’m fairly certain that this was big hit with the racers as a lot of them smiled or laughed when they saw it. Yay for good race signs!

As I got back to the tent to change into my pirate gear before the 8K started I noticed my co-pirates in regular running garb. They had apparently been trying to tell me all day but we kept getting side tracked and never finishing the conversation. So instead of co-pirate wenches, I wound up being the Captain of The Dirty Pirate Hooker ship all by myself. Hey, once I’m comitted to a costume, I’m all in. Insert “yo, ho, yo, ho a pirate’s life for me…” jokes here. 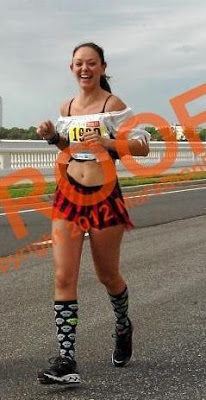 Considering we all got pretty beat up from the 15K on Saturday, most of us decided to just keep it easy on this 8K and have fun. Oh, and have fun we did. 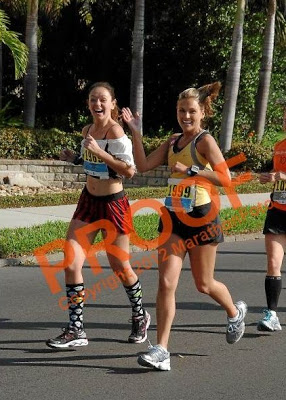 Me and The Reporter chatted and laughed the entire way and felt slightly bad for those folks who were truly racing. It’s always annoying to run by people in a race who are laughing and joking when you are busting your hump. Yesterday, we were those people. Although I think we did help out our buddy Katherine who was completing all four races and said she could use the company. 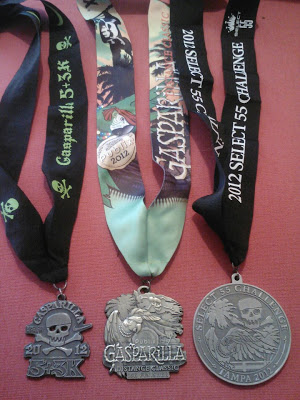 It was a great weekend! Even though the 15K wasn’t what I wanted, I can’t be too upset because I really hadn’t been training for it. I’ve been spinning and running and didn’t really even taper for these two days. But I still got three medals for my efforts and they are awesome! (One is for completing the mini challenge. Think of what you get when you do all four races! HOLY SWAG!)

Congratulations to all who raced! Lazy Runner came in 2nd overall for the big challenge, Little J got 1st in her age group for the 15K, and big T had a great finish time on his 15K! BLOGGER BONUS – I even got to see Jamoosh flying down toward the finish of the half marathon!

If you ever want to experience Florida, I would highly recommend traveling down on Gasparilla race weekend. AARGH!!