Thank you for being a friend…. 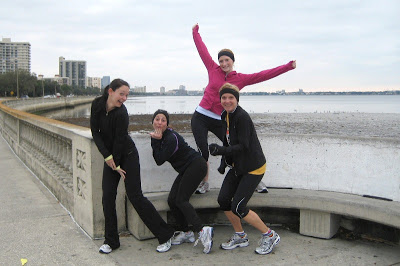 Happy Valentine’s Day kids! I hope you all are enjoying the day. I’m just so freakin’ excited that I have tomorrow off I could care less what day it is. But then again, I do love chocolate….

Yesterday’s 22 miler went very well for the four of us who braved some wind along Bayshore Blvd as a pre-marathon dress rehearsal. P-Funk and I had our usual ridiculous conversations, that we find hilarious, but no one else seems to get. Although Redhead and Hollster definitely get in on the action most of the time. See below as evidence of our collective goofiness/awesome post run.

It was chilly yesterday and most Floridians running/walking with us had on their very finest winter work out gear. Not. It was like a game of “Who’s Homeless? And who just doesn’t own more than that one coat/long sleeved running shirt?” We also saw a very angry looking older, Asian man walking who kind of grumbled at us when we said hello the first time we saw him. The second time we saw him, his endorphins must have kicked in because he said, “Good morning.” To which we squealed with delight. Ah that things the P-Funk and I find joy in. Like the lady who walked like that old RuPaul song, “Sashay, Shante. Shante. Shante. Shante. You better work!”The route I planned was a little (fine, a lot) dumb as I must have forgotten that none of us are in the military and therefore we could not run on the base. The base that I included stupidly in our route. Oops. We had to tack on the extra mile at the end. Boy does that suck. We could barely add at this point. Actually this is when P-Funk looked at me (I think it was mile 21 or so) and said, “If I hear the words TACK and ON, I’m going to be very upset.” So I said, “We need to ADD MORE.” And we did. After our run was finally over we went to a most delicious breakfast at this cute little breakfast spot. I had a chocolate milk and the right side of the menu. Hollster had the left side. MMMM grits! 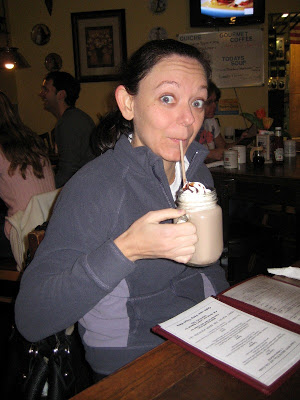 As we draw closer to the actual race I have to give a special thank you to my running buds. Red, you all know, I LOVE. Can’t. Live. Without. What you also need to know is that Hollster and P-Funk have provided so much amazing girl talk and friendship that I now cannot live without them either. All three of them must now know that they are stuck with me. I’m like a rash that just won’t go away!

But seriously, the bonds that come from running with others can become very strong and will outlast your running days. I’m sure of it. But don’t get me wrong, I don’t see my running days ending any time soon. I may take a little break after Gasparilla, but the running will always be a part of my life. I look good doing it. Eh.

With that, I say good day. Two weeks until the big day. Let the taper madness begin.