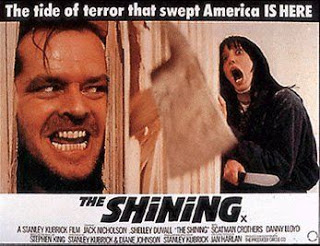 This post is going to be off the subject of running for the most part. But being the running blog this is, I’ll try to throw some in for good measure.**
Back to Halloween. This will more than likely be one of the many posts on Halloween to come during my blogging life. Get used to them.
I have decided to bless you all with The Top Ten Halloween Movies Of All Time. Yes, they are MY Top Ten, but let’s be honest here people. I have amazing taste. (This was super hard to narrow down. Give it a go yourself if you don’t believe me.) It’s LIST TIME! Away we go…
10. Shaun of the Dead. While this movie is more funny than scary, it features Simon Peg, whom we all love. It also seems more realistic about how a zombie invasion would go down in my world. Zombies? Head to the pub! 9. Scary Movie. Also a comedy, but it’s so freaking funny. Actually the sequel and subsequent movies are funny as hell too. And I think we can all be thankful for Anna Faris entering our lives.
8. 28 Days Later. This movie was so different and scary as shite. I actually think that the military dudes freaked me out more than the virus.
7. The Ring. Holy heebie-jeebies! That crazy beech is in need of a serious hot oil treatment on her quaf.
6. Nightmare on Elm Street. Um, well hello Johnny Depp. Oh, this is a scary movie? All I see is Johnny Depp. Ok fine, Freddy is pretty freaky. And the idea of going to sleep and getting killed in your dreams just really blew my mind when I was 10.
5. Halloween. The score for this movie is an all time classic. You hear that crap in a dark alley or home by yourself you better get your run on! (Good thing you’ve been doing your speed work.)*** Also, how is it that Jamie Lee Curtis looks so awesome in what can only be described as mom jeans?
4. Poltergeist. Attacking trees (Nitmos was on to something here!). Attacking clown toys. Attacking pool. It’s the suburbs all right.
3. The Excorcist. Do I really need to explain this one??? HER HEAD SPINS AROUND FOR PETE’S SAKE!
2. The Descent. So, I am a pretty claustraphobic and I was sweaty from the moment they entered that damn cave. Who in their right mind would take up this hobby? Plus, those bat-people things are just gnarly. Although, I do like that the women in the film are so kick ass!
1. The Shining. Supremely scary. The hallway twins, the lady in the bath tub, and Jack Nicholson’s version of a psycho make for a movie that scares me so much yet I watch it every year. It’s just the creepiness of that old hotel and that Danny kid freaking out. Not too mention that Shelley Duvall’s acting is phenomenal. Red Rum! Red Rum! Red Rum! Gets me every time. (If you like to read, pick up the book – it’s EVEN scarier!)

Honorable mentions must go to:

Evil Dead “Hail to the king baby.”Scream “Do you like scary movies?”Pet Sematary “First I play with Judd, then Mommy came, and I play with Mommy. We play Daddy! We had an awfully good time! Now I want to play with YOU!”Saw “I want to play a game.”Lost Boys “One thing about living in Santa Carla I never could stomach, all the damn vampires.” Jaws “You’re going to need a bigger boat.”

* The gauntlet on that has been thrown. November 6th is the Clash of the Titans!

** As I mentioned before, Running and I are on our way to reconciliation. We spent 4 miles together on Saturday and 4 miles together on Sunday. We took Monday night off but, I am shooting for a date with Running tonight. Of course, it was awkward at first, as these things usually are, but we’re getting comfortable with each other again. Quite unlike that bast@rd Bicycling.
*** See? Running blog!