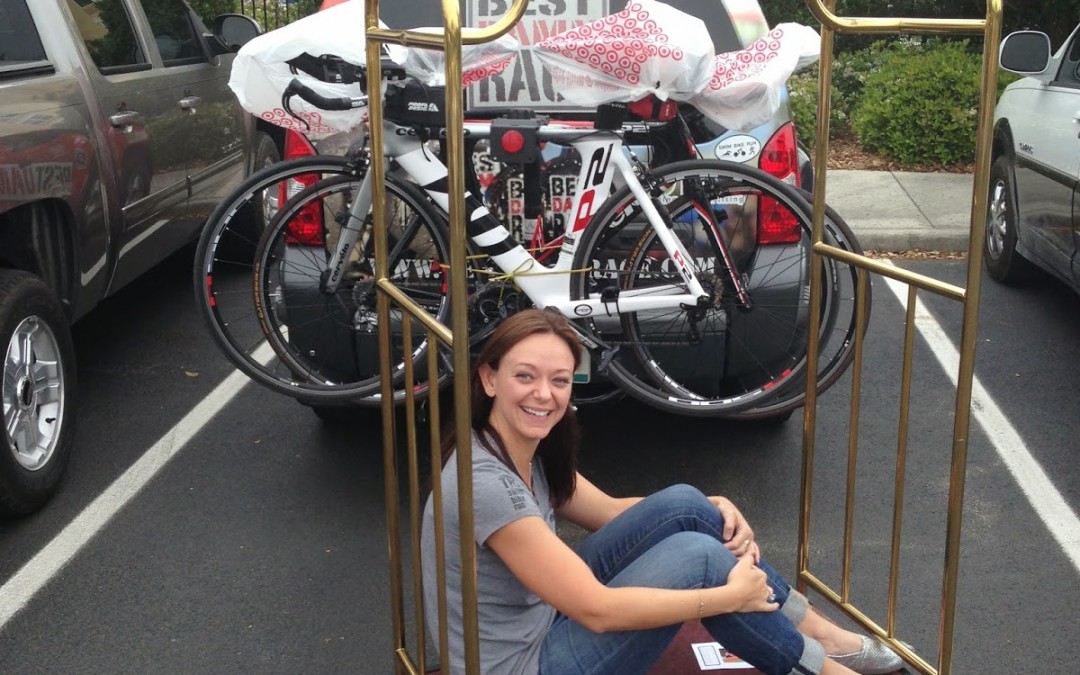 The weather watch for Saturday’s race began on the Thursday before the S.O. and I headed the hour drive north for my half ironman distance triathlon. I was racing the 70.3 on Saturday and the S.O. was racing the Olympic distance on Sunday. The two days of weather could not have been more opposite.﻿ I got thunderstorms and he got a chilly day with crystal clear skies
We left for Ocala on Friday afternoon in order to get checked in and rack my bike. It was nice to race on a Saturday because I like having Sunday as a rest day.
As we got to the race site, I was underwhelmed. I knew it would be a small race, I just didn’t realize how small. I wound up taking my bike back to the hotel with me was because the forecast was calling for overnight rain and the race was so small I’d have no trouble racking it in the morning.
After the pre-race meeting, with an extremely nice Race Director, I had a some major jitters that I expressed to the S.O. and he was kind enough to tell me it was normal and not to worry. I also texted with Tori and Meghan that I was upset about the entire run being on a trail. I knew this was going to slow down my run quite a bit. I was told it was partial trail last year, but they changed it to all trail this year. Fortunately, I was on the last 13.1 miles of my running shoes because I knew they’d be toast after this run.
After a delicious pasta dinner and a so-so night of sleep, I was up early and heading to the race start. The weather showed rain and thunderstorms for the day, but it was nice and overcast as I racked my bike and headed to the swim start.
There were no wave start times posted and it’s because both the half ironman and the full ironman folks would all start together in one wave. According to the RD there were approximately 275 athletes. However, I’m not sure if people DNS’d or DNF’d because the final results only show 174 total. (Only 32 finished the full!)
This was new to me and also kind of cool because I got to start right next to my coach!
The Swim 1.2 miles
The swim was a big triangle loop in Lake Weir. The water temp was allegedly 64 degrees but it felt warmer than that to me. It was a water start so we all walked to the first buoy and waited. We weren’t quite sure what we were waiting for until we heard the crowd start a countdown (this is a really small race, in case you haven’t already noticed).
I started swimming and looked to my left to see my coach still walking. The water was pretty shallow still, about up to his waist. I kept swimming and he kept walking. I finally popped up and said, “Are you gonna swim?” He chuckled and said he would as soon as it got a bit deeper. I saw him start swimming and tried to keep sight of him on my left but it got really congested out there. I had my first ever panic during this swim. Every stroke I took I hit someone or someone hit me. It was ugly. I couldn’t pass on the left or the right. People seemed to be everywhere. It made me feel very claustrophobic so I had to stop for a minute to get my bearings and basically get my shit together.
As I started swimming again, I thought about controlling my breathing and it was smooth sailing from there. I made the turn at the second buoy and felt good. I love fresh water swims. We do so much ocean swimming down here that swimming in a lake is a God send.  I hit the final buoy, popped up, and saw Coach Steve about three steps in front of me. I almost had him! That’s what I get for being a weenie.
Swim Time: 34:58
T1
I was really thankful for wetsuit strippers and I followed Coach Steve into transition. I tried to work as fast as I could and not make any sandwiches. Haha. The women who were 1st and 2nd in my age group (AG) went about 30 seconds faster so I need to work on this.
T1 Time: 2:29
The Bike 60 miles
Yes, you read that right. This bike course was four miles long. B.o.B. was NOT happy about this. I’m fairly certain my pictures coming into T2 are of me scowling. I was ready to be off the bike. Note to Self: Must bike lots and lots more before IM.
I took a gel every 45 minutes and drank a bottle of Herbalife Prolong plus two bottles of Nuun. I also took two water bottles at the aid stations.
Overall, the course was nice. It was well marked and had aid stations at four different points. Traffic was open but there was police support at major intersections. It was probably a tad more hilly than I had expected but nothing crazy, just some rollers. Ultimately, I made my goal time when I hit 56 miles and I’m happy with my overall pace (a bit over 18 MPH) based on the rollers and headwind and rain on the way back in. I know I still have tons of work to do on the bike, but I’m seeing improvements and I’m happy with that.
Bike Time: 3:16

T2
I had covered my running gear with shopping bags and that spared my shoes from being soaked when I got to them. It didn’t really matter because I was already soaked from being rained on during the last 25 miles on the bike. I used that stool to put on my running shoes. I’m not sure if it slowed me down but I was happy not to sit on the ground for once and this was probably my most competitive T2 at a race so that’s exciting.
T2 Time: 1:32
The Run 13.1 Miles
Oh the run. My dear, beloved run. It sucked so bad. This run will go down as my worst run in triathlon history thus far.
First and foremost, my back hurt so badly within the first mile off the bike that I had to stop and bend forward to try to get it stretched out and make it less painful. This is only the second time it’s hurt like this and it made me so very sad. I ran another quarter mile before it hurt and I had to stop and stretch again. This went on for about six miles. It. Sucked.
Second, as mentioned above, this run was all trail. I am not a trail runner. It hurt. It was mostly packed dirt but there were some grassy and muddy spots. There was also about a mile and a half up a twisty two person wide section. I highly disliked this section and was so sad when I saw Coach Steve coming back toward me and realizing I had to do that loop again. I think I yelled “MF-er!” Only, the entire actual word.
Finally, it was a lightning and rainstorm of biblical proportions. A full on Noah’s Ark deluge of rain and lightning. By the time I hit mile nine I thought for sure they were going to come pull me off the course. There were quite a few stretches where I was completely alone. It was nuts, but I figured I would just keep chugging along and when I did see the few folks on course I knew, I was SO happy to get some supportive cheers from them. Actually, most of the runners I saw, with the exception of when it was really coming down, gave each other shouts of support. I did the same every time I saw someone.
My run pace was a lot slower than I wanted. I can blame the trail and the rain but I just didn’t have “it” on Saturday. And that’s ok. I know I need to get that back situation under control and I’m happy that I at least kept running even if it was a lot slower than I intended.
Run Time: 2:14 (10:13 pace)

Overall Time: 6:09
Since this was a VERY small race, I wound up 3rd in my AG of five. (Technically there were six but the overall winner was in my age group.) 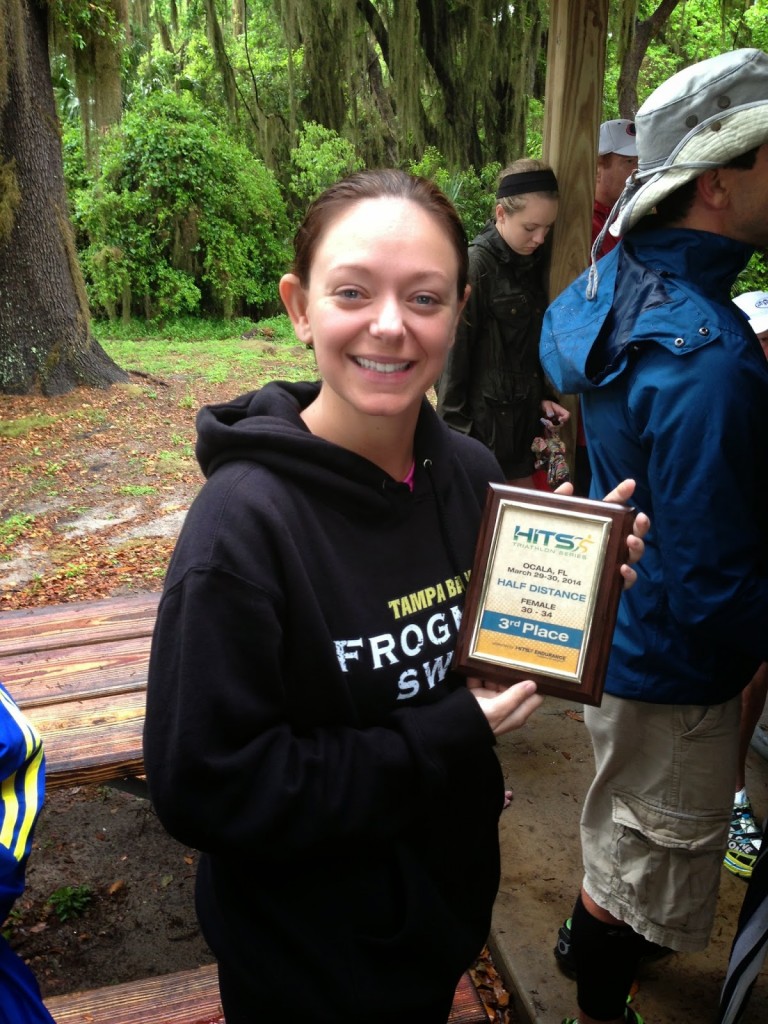 Overall, I think I managed what I could with what the day gave me. I think the folks who did the full ironman distance are amazing as it was not fun being out there for six hours in that weather so I cannot imagine how those people felt. Plus, you know, they rode 120 miles.
HITS is a nice, little race. I don’t love trail running so I don’t think this is a race I’d do again, but I think the Race Director was super nice and genuine and really cares about the athletes. It’s not easy putting on a race of this size so kudos to him and a big thanks to all of the volunteers!
The following day, Sunday, I got to watch the S.O. and his group of fast buddies race the olympic distance. There was also a sprint so it was fun to watch and snap some pictures while walking around on some very sore legs.
Thanks for reading and for the encouragment! I heart you guys.