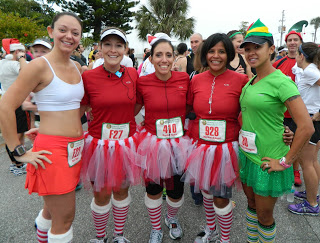 On Sunday, I ran in the 11th Annual Holiday Halfathon. I say ran because this wasn’t a true race for me. I’ve been consistently running 10 mile long runs on the weekends because I’m prepping for Ragnar. I don’t currently have the fitness to race a half so I went into this half marathon knowing that I’d run easy at the start and chat it up with some running buds and then take it from there.
The Holiday Halfathon is a nice, small half marathon held in Madeira Beach. The race director does a great job of taking care of the runners and while the race was relatively small in comparison to the big honking Disney and Rock N Roll halves, I was never alone and yet had lots of room, two things I really enjoy in a race.
The funny part about my race prep was how nonchalant I was about it. I spent the night with the SO since he lives closer to that area than I do and I forgot my gels. I had no idea where the race started and I didn’t even look at the course. We overslept on race morning and laughed at how ridiculous it was that we weren’t more prepared. Oh well.
Fortunately, we got to the race with plenty of time to hit up the porta potty and snap some pre-race photos with friends.
﻿I was really excited to see my college sorority sister Amy. I’ve been following Amy’s progress as a runner and she’s incredible. She’s also a blogger who writes Fat Free Mommyhood. She’s made amazing changes to her life and has shared her weight loss journey. She is a true inspiration!

We got to chat for a bit and took a photo together. After the race when I got back to the car I looked at how she captioned our photo and it made me feel so very, very good.
“It’s not every day you get to run in the same race with one of the people who inspired you to get started :)”
﻿﻿
Wow. I had no idea. I mean, I knew she followed my blog and I hers but I’m just so thrilled that I could help reach someone in this way. It makes blogging that much more worth it. As a little back story on this, I was about 25-30 pounds heavier toward the end of college. Drinking lots of beer and eating pizza everyday while not working out will do that too. I had to work hard to lose weight after I graduated and this is yet another reason I keep running and doing triathlons. Yes I love them but let’s be honest, the other benefits are icing on the cake. Er, should I say, hummus on the carrot? THANK YOU AMY! I’m so proud of you. Keep kicking butt!
Now, about the race. Kat and I had decided we’d run together for as long as we could and then separate if we needed to. We knew we’d probably see Meghan somewhere along the way as she was doing her long run and the half mary was just part of it. God bless her!
Kat and I started easy and chatted our faces off. I noticed immediately that it was super muggy. I mean, it was humid as all get out. I had my hair in a ponytail and definitely should have braided it because by race end it was a rat’s nest.
We caught up to Meghan around mile 5ish and the three of us chatted and ran on. Around mile 7ish Kat’s asthma really started to bug her. Did I mention it was miserably humid? She let us know she needed to walk a bit and we parted ways.
Meghan and I picked up the pace a bit and ran miles eight through ten together. I haven’t really had the opportunity to talk with Meghan a lot and I really enjoyed our time together. She’s training for Disney and she’s going to do great. She ran super solid and I wish I could say the same for my first marathon training.

At mile ten Meghan and I parted ways. I had been picking up the pace a little and was feeling good. It’s amazing how negative splits will do that for you. I ran up on my friend Whit, who is the owner of Crossboot. This girl is bad ass. No way around it. She had done a cross fit competition the day before and was feeling a bit sluggish. Clearly, not something I’d ever be able to do. I mean, the woman did a crazy weight lifting competition the day before a half marathon and was still holding an incredible pace. BAMF.

Anyway, when I caught up to her we decided we’d push the pace for the last 5K. And push it we did. I was breathing hard and my legs were feeling like jelly as we got closer to the finish line. We helped each other a lot because neither one of us would leave the other. It was as if we were supposed to find each other on this course.
I had wanted to get in under 2:00 but was happy with the 2:02 I wound up coming in at. This was probably the smartest training run I’ve done in a while. I had enough left in the tank to really push those last three miles and it was fun. In looking back at races I’ve really, really enjoyed, some of the best ones are the ones that I have no goal in mind. This one will definitely go into the memory books as a super fun time with friends.
The SO did great as well and even though he’s got some tendinitis and had to walk for a minute he’s still obnoxiously fast. ﻿﻿

﻿Happy Monday peeps! Did you race this weekend?