I am a triathlete. 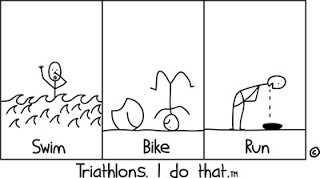 Since my plans for the Chicago Marathon fell through (I’m running Jacksonville instead) I’ve been feeling disjointed. One minute, I can’t wait to pound out a ten mile run and the next minute all I want to do is spend lots of time with my new bike.
For the longest time I’ve really, truly only considered myself a runner who dabbled in triathlons. I know that sounds crazy considering I’ve completed more than a handful of triathlons, including a half ironman, but somewhere along the line someone mentioned that a real triathlete is strong in all three disciplines. They aren’t just waiting to get to the run, a la’ me. And they actually enjoy cycling and swimming. Thus, I’ve never really called myself a triathlete. “I’m a runner who completes triathlons,” I would say.

I’ve been feeling more and more like a triathlete. My cycling has gotten significantly better, even if my mental game still needs some work. And, yes, I know, I have said it a billion times, I love swimming. Currently, I really enjoy cycling. In fact, I can’t really say that I love running more than the other two right now. It’s sort of like how your mom says she loves all you kids equally but in different ways. And while that may be a big fat lie sometimes (don’t act like you don’t have a favorite!), I understand it.

I’m so tri-brained right now that I was convinced to add another triathlon to next weekend’s line up. That would be one sprint on Saturday and one sprint on Sunday. I’m sure that will prove to be a terrible idea come Sunday when I can’t climb the stairs to our bedroom or open my eyes on Monday morning. I’m also sure that I am going to have a great time spent with friends all wearing spandex, doing what we love: swimming, biking, AND running.

Yes, I am still going to run the Jacksonville Marathon and train my ass off for it but I think I’ll be much more inclined to use those cross training days than I would have in the past. And when I finish that race, I’ll still be a discombobulated runner, but if and when the question comes up again about my multi-discipline loves, I’ll be happy to say, “I am a triathlete.”