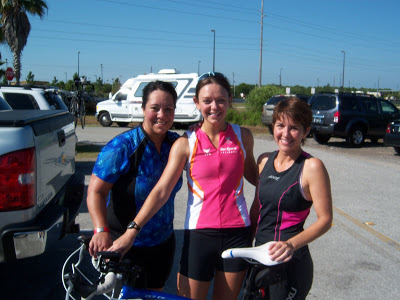 I did it! I finally rode the bike farther than I can run. I’m super excited about this new distance and couldn’t have done it without the help of some friends.

Having run 26.2 miles more than a couple of times it was safe to say that my 25 mile bike rides were falling short of what I should be able to do on a bike. I mean, come on, at least on a bike you can cover that distance in waaaaay less time than you can on foot. And as an added bonus on the bike – you don’t get those awesome “runner’s trots.” Well, at least not during the ride, before is totally different matter….I’ll get to that….

On Saturday AM I hit up my ten mile run and felt pooped after seven miles. This is probably due to one or all of the following:

A. My ridiculous pacing skills or lack thereof.
B. It was hot.
C. I didn’t take a Gu because I don’t normally need them for 10 miles, yeah, I’m a genius. I know better now.

So I made my ten miles and my shin felt weird but I iced it and the rest of Saturday was lovely.

Then came Sunday. D Day. The day I would attempt my farthest bike ride ever with Dolly. I woke up super early and headed out to meet Navy Steve’s better half, Aloha Kris. (She’s from Hawaii so I have just given her this nickname.)

Aloha Kris and I headed up to a trail about an hour northwest of where we live. We were meeting up with two gentlemen, Rick and John (I don’t know them well enough for nicknames yet…), and our girlfriend Tiny Tish. Rick, John, and Tiny Tish are super strong cyclists so I knew I’d be in for a workout, not to mention that I was going to attempt a 33 mile ride. Yikes!

On the way there I made Aloha Kris stop at a gas station since I was having nervous PC’s and felt that I would crap my pants if we didn’t hit a restroom soon. And of course as soon as we got to the trail start I had to blow up that porta-potty as well. Sorry other cyclists! I just get SO nervous before rides. I can’t help it!

Anway, we got clipped in and got going. Tiny Tish and I rode together the first ten miles and kept a nice even pace at around 16 to 17 MPH. This is a big jump for me considering that I previously only held about 15 MPH. She gave me some tips for going over bumps and around turns. We grouped up again at the ten mile marker and turned around to head back toward the direction of the vehicles but had a park we could head into to add in the extra miles.

This is where the ride got fun for me. I got to do some drafting behind Tiny Tish, Rick, and John! They were cruising and I couldn’t help but feel like a total free-loader since I knew I wouldn’t be able to pull them and return the favor. We got to up about 21 MPH at one point and I tried to hang on as long as I could. I really enjoyed the drafting and hope to get better so I can pull at some point. I probably stuck with them for about 6 to 7 miles before my legs crapped out and I had to slow down.

We were into the park at this point and it was getting hot! The trio had pulled pretty far ahead of me and I got nervous about going the right way. I had never been into this park and didn’t want to get lost. I took the verbal directions I was given from Rick and just kept on moving. I knew Aloha Kris was a little behind me and felt that if I did get lost I could turn around and hook up with her. I know now that getting lost would have been pretty impossible on an out and back, but that fear was still there until I caught up to where the front riders had stopped. Aloha Kris joined us and we headed to a pit stop at the park restrooms.

At our stop I re-fueled with a Honey Stinger Waffle. Let me just tell you that these cookies are deeeeelicious. I love them. I’m not sure I could eat them for a long run but they are perfect for the bike. And for watching TV. And playing with Lloyd. And at the beach. And at a picnic. And a stop light….

Upon leaving the park I couldn’t hold on to the speedies so I just did my own thing and oscillated between riding fast and slowing down cause my legs were tired! I had hit 29 miles and from the park exit it was a four mile ride to the car. I was beat but determined to finish strong.

I pedaled as much as I could and coasted when I got tired. And believe me, I was tired. The last four miles of this ride seemed like an eternity. When I finally saw the parking lot by spotting the porta potty that I blown up earlier it was like a mirage. I was so happy to have ridden 33 miles and even happier that I was done!

Aloha Kris, Me, and Tiny Tish after 33 miles!

I actually really enjoyed the ride even with those last four miles being so tough. I hit up a swim Sunday after I got in a nap and again my shin felt weird. I am keeping an eye on it and will report further after a run attempt tomorrow.

Hope you all had great holiday weekends!