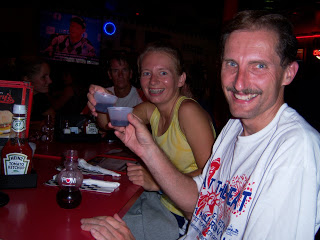 As I mentioned before, I like stuff will periodically pop up with reviews from other bloggers and occasionally from yours truly.

Last week I was sent an email from Janny, the POM Blogger, about POM Wonderful. She mentioned that she liked my blog (she obviously has good taste) and that she wanted me to try out some POM Wonderful pomegranate juice. I figured why not, if it’s free, it’s for me!
The POM Wonderful arrived yesterday so I decided to bring it out for the BRA to sample. After The Ring of Fire last night the BRA headed to a local watering hole to get some grub. I brought along the POM Wonderful and passed it around for all to try.

Coach EK and Esther getting their POM on.
Overall almost everyone enjoyed the flavor and would buy it. I believe there were a few jokes made about how the information that came along with the product said it helped with erectile function. You know how the BRA can’t pass up a good joke about sexual innuendo (in-your-endo). A couple folks thought it was a bit tart. I personally enjoy the flavor. They have quite a few other products and I think I would try the POM Light Teas for the reasons below.
Some in the group don’t pay too much attention to the calories or sugars because most of them run a gazillion miles a week and generally eat healthy so the health benefits from the drink are an added bonus. I on the other hand worry about sugar. As it appears that there is quite a bit more sugar in this beverage than my usual water/G2 I would probably cut it with club soda or just regular water. It would probably be tasty in a smoothie too.
I don’t think it’s intended as a diet drink but could help you get more of those healthy antioxidants. And well there’s always that erectile function thing….
Several other bloggers had some reviews I came across. Here they are:
The Lil Runner reviewed Wrightsocks and Amazing Grass.
EGels as reviewed by Secrets of a Running Mom.
Chasin’ Bunnies told us about small handheld water bottles.
TGIF peeps!
Up next: 16 miler tomorrow morning.
On deck: Biathlon on Sunday (yikes!)