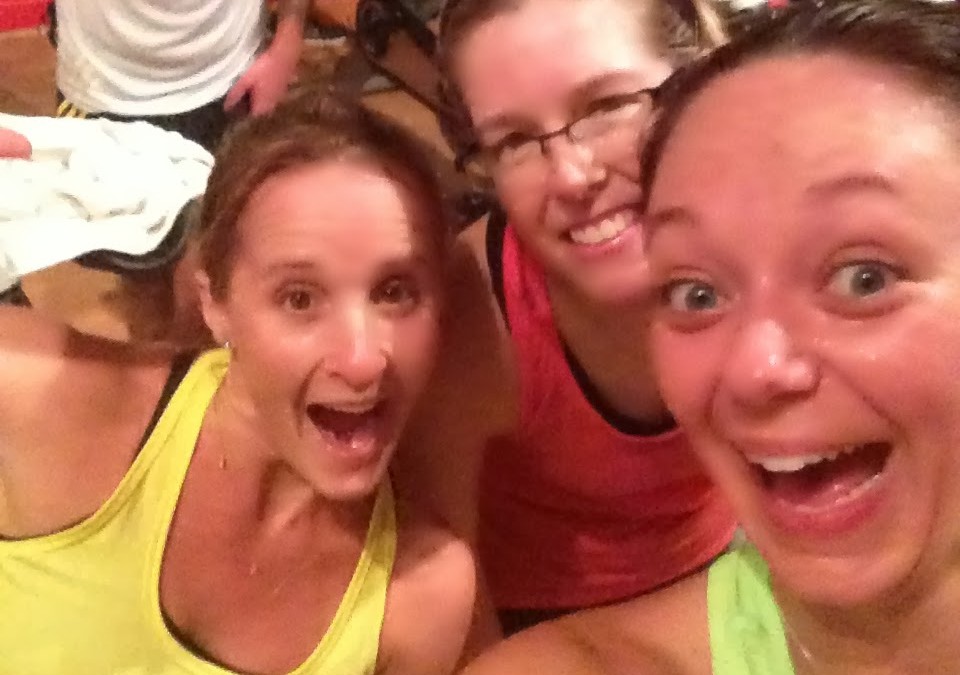 You ever have a workout that you just needed? I imagine so because I have them every now and again and I relish these workouts. Last night’s spin was EXACTLY what I needed.
My spin studio has a live DJ once a month and it’s like a straight up club in there. Last night was the first time I tried it and a few friends came along for the ride.
The only lights are the changing colors under the instructor’s platform and all the fun lights on the DJ’s board. I took a photo with the lights out but you can’t see a darn thing except glowing blue from said platform. The music, while not something I’d drive around listening to, is energetic and loud. The DJ spun mostly dance/electronic type stuff but threw in some Bruno Mars for good measure. I really loved how the instructor and the DJ were so in sync without really seeming to have a planned set. The only downside was that because the music was like one long song, I had no clue how long I’d been spinning for. Darn you techno songs, you all sound the same! Mm-ch-mm-ch-mm-ch….
Before we got started I was feeling tired and just wanted to get the class over with. I had some laughs with my friends before starting but wasn’t sure if I could push the way I normally do. I told myself that maybe I’d take it easy tonight and do the old “fake out turn” on the resistance knob. Don’t act like you’ve never done that.
But, true to form, when the instructor called out, “Right turn!” I was ready to make it heavy and “climb.” I kept reminding myself that Ironman Chattanooga is going to be a hilly monster and this itty bitty fifty minute spin class wasn’t going to make a dent in what I have in store. I cranked that knob to the right and could barely turn my legs over, but I kept pushing with the downstroke and pulling with the upstroke.
By the end of class I was dripping with sweat and feeling so so so much better than when I arrived. I was smiling and forced my friends into a post spin session selfie.
It’s true what they say about working out, you never regret it, do you? Have a great weekend friends.
﻿