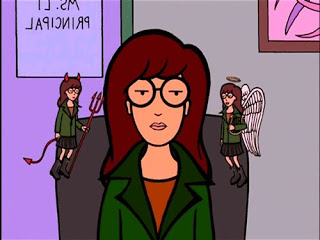 I don’t know if I mentioned this (or if you bother to look at my upcoming events list) but I have a race this weekend. A sprint triathlon to be exact. In my injury induced haze I had transferred an earlier tri entry to this one. It’s cool because this is the race I’ve done every year since I started triathlon-ing and it’s the first one I ever did. By the way, I still feel like a total triathlon noob.
Since I haven’t really been able to “race” since March I was totally conflicted about this event on Saturday. The angel on my left shoulder is saying, “Take it easy. Don’t hurt yourself. Have fun!” and the devil on my right shoulder is saying, “Balls out B.o.B.! It’s a sprint! Race! Race! Race!”
My coach said to enjoy the race and don’t get hurt. My tri friends would more than likely agree. My OCD race devil told me to go look at the times from last year and see where I placed. I may or may not have done this. And my race angel said not to knock myself of Augusta training.

Ultimately, I think I’ll set the goal to have a faster bike split this year since that’s where a lot of my focus has been. I hope to have roughly the same swim time and realistically think my run will be slower. There’s not a whole lot I can do about that at this point. I know I’m not going to win the damn thing but I always want to perform better than I did the year before. This may not be the case this year’s over all time , but focusing on a faster bike split will help me shut that devil up.

Race Goals:
1. Faster bike split. Hopefully it’s not too windy because even though this is a sprint course of about ten miles, it can get super windy. We’ll see if this hill training is paying off.
2. Do not kill myself on the run. I don’t think this will be difficult since I haven’t raced in a while and it’ll probably be hot as hell.
3. HAVE FUN and DO NOT complain after the race about my time. I’m healthy and running. This is what it’s all about.
4. Don’t fall off of friend’s boat during post race celebration. (This one is because I know lots of libations will also be on that boat. Heh.)
Happy Tuesday friends. Almost to hump day… hang in there!