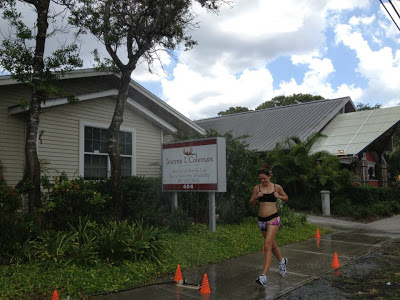 I’m back to running. And my toes hurt. I had all of this time off and my toes were getting back to normal toe shape, and toe size, with toenails and everything! But now, they hurt. I’m sorry toes. It’s the price we all pay for the runner’s high. Prepare to get runner ugly again.
Thus far I’ve successfully managed two runs since being back from DC. I got suckered into a 5K fun run after my long ride on Sunday. It was a local 5K hosted by a group called Running for Brews and it started at 1 PM. Who the hell starts at run at 1 o’clock in the afternoon in July? Drunks apparently.
Initially I went to this fun run to cheer friends on and not drink but just hang out and be around hot sweaty guys runners. And then I got there and changed my mind. I took it easy for the first mile and a half and then lost my mind a little. I probably ran a wee bit too fast for this one but the sprinklers along the route and the fact that it was sort of a “race” got the best of me. Needless to say I was pretty sore on Monday and lesson learned. Starting back isn’t about speed. It’s about survival.
If I am to make it through that half marathon at the end of the Augusta Half Ironman I need to be healthy. I don’t really care how slow I go so long as I don’t walk. Ultimately, that’s going to be my goal for that portion of the race.
This morning’s run was tough. I opted to run with my buddy Speedy Jess and since we’re both coming back it’s nice to have a pal to start over again with. We decided to go for four miles. And I tried not to give a damn about pace. I think that’s going to be the key for me in coming back from this injury. It’s going to be hard because I can get quite OCD about that damn Garmin but I know how important it is to just get the mileage back up.
My leg is feeling better but it’s sore and I know it just needs to keep being strengthened. I’ll continue with my yoga regimen because I feel that it’s really been key in recovery. It may not work for everyone, but I’m a firm believer in it. I don’t think regular stretching is going to cut it for me and that’s because yoga involves strength just as much as it involves flexibility.
As it stands I’m ok with the swim and the bike in terms of distance. The 56 miles on the bike doesn’t seem quite so scary to me anymore. However, in terms of training frequency, I need to pick it up. Where I am lacking is obviously on the run and the way I’ll feel after the swim and the bike. I want to get faster on the bike and I think this is manageable.
My coach, Navy Steve, gave me a great plan for this month to ramp up on the run, without over doing it. And I’ll be hitting the pool hard. I also plan to add in those rides in the evening. It’s so nice to have a spreadsheet again!
A fire has been re-lit and I’m hopeful I can continue training without injury or any major hiccups. As my buddy KC says, “IM training waits for no one” or in my case, 1/2 IM training.
Happy Hump Day. We’re on the down slide into the weekend now. Holla!