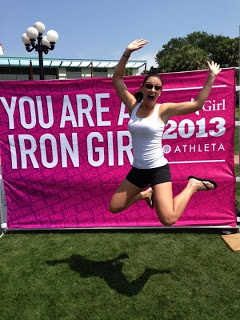 First, let me apologize for the lack of posting last week. I was race directing my 5K and basically had zero free time. I will say that it went very well and I’m happy it’s over. Race directing is super rewarding and super stressful all at the same time. More on that later.
Let’s fast forward to Saturday AM shall we?
On Saturday morning I got up super early to volunteer/spectate at the S.O.’s sprint triathlon. Nothing makes me happier than body marking triathletes at the butt crack of down. Honestly. It’s super fun! (Especially if you’re perv. Kidding! Sorta.) Anywho, the S.O. kicked major triathlon ass and came in 8th in his AG, which is no small feat in the men’s 30-39 group, and 32nd overall. Homeboy ran a crazy fast 5K and I’m super happy for him. He works hard and earned that PR. WTG boo!

After his race and a quick nap we headed over to pick up my packet for the Clearwater Irongirl. This race has a 5K and half marathon and as a good coachee I stuck with the 5K even though I knew it was going to be slower than I’d like and more than likely, hurt.


I must say that this was one of the best expos I’ve ever been to and mostly because it’s geared toward women. The booths were awesome and I found a shirt I’m in love with from the brand, Run Pretty Far. I wore my new shirt on race day and got tons of compliments. The fabric is great and they have competitive prices. Go check them out!
Fast forward again to Sunday AM. Race morning. I was not feeling it. I was tired from a very long, very stressful week and this is how I felt: 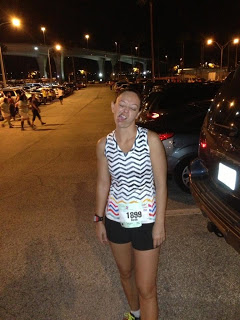 The S.O. told me to lock it up and he snapped a much better photo and then headed off for a bike ride while I went to race.
One of the best things about this race was that there were TONS of blogging friends there. Most of the gals were doing the half mary and I must say that after running my one bridge up and over and up and over again, I did not envy them for running their two bridges. Nice job ladies!
Soon the half marathon started and I waited around for the 5K start. I knew I’d be slower than I’d like due to my running break and I told myself to start out around an 8 minute mile pace and hold on. I lined up very close to the start because after seeing last year’s times I knew this would be crowded and my time was good enough to at least get an age group award. (Thanks to Meghan for all the race photos!)
Did I mention this race has bridges? Big ones.
As shown in the photo above I went out too fast and paid for it on the way back over the bridge. I got passed by a few women, who clearly raced smarter, and I was sucking more wind than a vacuum cleaner. As soon as I got off that bridge I knew I was slowing some. I tried to catch my breath and keep going. I was more than thrilled when I saw the finish line. I love the 5K. I love it even more when it’s over.
I knew I had a good chance for placing by the seeing amount of women who were running in front of me. I was really happy that I didn’t have wait in line for the pancakes. Score! I was even happier when I ran into Meghann and she showed me the Irongirl app on her phone that said I’d placed 3rd in my age group and 21st overall. Not too shabby for a comeback run. Meghann, who works for Irongirl, let me know that the age group awards were not to be missed. And she was right!
The AG awards are charms that say “Every girl has an iron core.” It’s adorable and I love it! I’m also really happy a friend got to present it to me. Thanks Meghann!
Ultimately, while I wish I was a little faster, it does show that I’m slowly coming back to where I’d like to be. And it shows that training pays off and it gives me incentive to keep working hard. I love that I placed 3rd and had such a great experience at Irongirl. It’s a race I’d definitely do again and recommend to others. The camaraderie of being around women supporting women is really special.
Final Time: 24:39