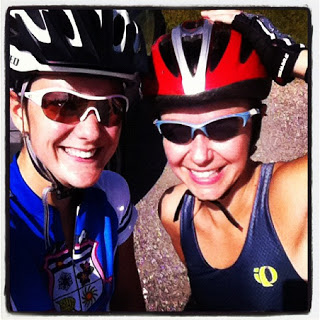 With two weeks to go until Augusta I was feeling pretty good on Friday. I had a final long run of 13 miles on deck for early Saturday morning and wasn’t too worried about the distance. I woke up early to get in three miles before the rest of the group start for the final ten mile loop. I ran into T and we decided to do our early miles together. I felt fine and we even went up a tiny, little bridge.
As the run continued I had a great pace. I felt good and my confidence was growing. That was up until about mile 7. My left IT band started to ached and tighten. And it only got worse as I went on. Since there really wasn’t a way to get back to my car without walking I kept on running. I’d stop every mile or so and stretch as best I could. Fortunately, our route was cut off due to a closed gate and I wound up back at the car at mile 12. The outside of my knee was really painful and it hurt just to walk. I called it a day.
After eating breakfast with Jess, I went home and iced, took some ibuprofen, and had a long nap. When I woke up, after having a sad missing my dad dream, the IT band was angry. Between the bad dream and the IT band, I had a slight meltdown. I got up, got dressed and went to buy myself two cupcakes. Stress eaters unite! I then headed over to see my sister, nephew, and brother-in-law. I didn’t feel good and sometimes family is the only thing that can help.
Sunday morning I woke up and planned to head out to the group ride because I was hopeful my IT wouldn’t hurt on the bike. It was really pissed when I headed down the stairs but as predicted, it didn’t hurt on the bike at all. The “group” ride wound up being just me and Tori since it seemed everyone else had late Saturday nights.
It wound up being a really nice ride. Tori and I chatted about Augusta and all the work we’ve put into the training. She made me feel better about my meltdown because she said she felt the same way about the race. We don’t do these races half ass. We train hard and while we know we aren’t going to win the damn thing, we want to do our best. And have fun, of course.
It was funny because after the ride my leg hurt a lot less than it did that morning. It hurt even less after I headed to the free yoga in the park session with my friend Nick. Nick also has some lingering IT issues so he showed me some great stretches and exercises.
As it stands this morning the IT is fine. Like it never even hurt. I know it’s there though. Lingering.
It’s one thing to be tired on the run at Augusta, it’s a whole other thing to have an injury flare up. That being said, I’m going to stretch, get a sports massage. and strengthen as much as I can in these next two weeks. I’m hopeful that I can at least get the IT to cooperate the way it has been the last few weeks. I blame not going to yoga and stretching as much as I had been. I know what I need to do. Augusta is right around the corner. Come hell or high water, I’m finishing that damn race.