Kettle corn is the devil.

Now that I actually get to write and get paid for it (finally!) I find that my blogging time has gone down. This week snuck up on me and I really thought today was Tuesday. Ha!
Last weekend was so much fun! Well, with the exception of my long run. I made a few rookie mistakes and I’ll get into that in a bit.

On Friday night the S.O. and I headed to a local brewery to celebrate a friend’s birthday. This brewery has a big open space that they make the beer in AND offer guests a variety of lawn type games to play while they drink and socialize. We played giant connect four, knocked down a giant Jenga, all while trying fun new types of beer. I had a “Wheatermelon.” It was delicious.
Then on Saturday I got up early for my tempo run. It was tough because my legs were SHOT from Thursday’s strength session. I managed all but the final mile and decided to cut it short. After my run I got all gussied up for some new blog photos. It was a blast! The super talented Darryl Wilson took my pictures and a Tribal Multisport teammate and friend, Lindsay, is actually a full time make up artist so she made me pretty. (As a side note Lindsay also completed Ironman Chattanooga.) I love how the photos turned out and can’t wait to add them to the blog.
Once my photo session (I just like saying that) was complete I headed over to the little festival going on nearby for some kettle corn. I KNEW this was a bad idea. I said to myself, “Self. Don’t you get that kettle corn. You know it upsets your stomach AND you have a long run tomorrow.” But then my bitchier, hungrier self said, “Shut up Goody-Two-Shoes. We wants our precious….” 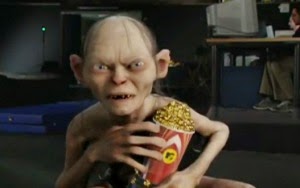 Sigh.
Fast forward to Sunday morning. I woke and immediately noticed my quads were still sore. And I felt a wee bit gassy. (TMI. So sorry.) I met my friend Teresa and had plans for a two hour, thirty minute run. The first two miles were rough. I had to stop to use the restroom not once, but twice. Ugh. My legs felt awful. I tried to push through it and fortunately, Teresa was kind enough to deal with all of my issues.
I made it exactly one hour and a half. I had to stop running after nine miles. Womp womp. I held on as long as I could and got in a few bridges but between my rookie mistake of eating something known to upset my stomach and having dead legs, I knew I had to hang it up.
I was only a tiny bit bummed because I knew I had lots of time to get in long runs before Grandma’s Marathon in June. Ok, maybe not lots, but enough. I discussed my strength sessions with Coach Jon and I’m going to cut back on them. Going once per week isn’t giving me enough time to really acclimate and they are hurting some of my quality runs. Coach Jon offered the solution of doing some pre or post run plyo and “mini” strength drills that don’t completely knock me out. I can work with that.
The rest of Sunday was spent with family and a delicious Easter meal. I’m ready to rock n roll and really hoping for a cold front for Sunday’s Iron Girl half marathon. It’s probably not going to happen so I will just think cool thoughts…and avoid kettle corn.