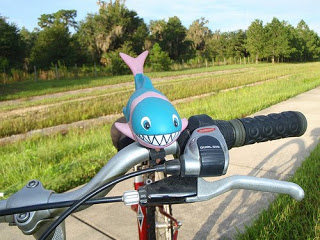 Oh my goodness! Where have you all been? Wait. Where have I been? Um, slacking actually.

Not work-out slacking, but blog slacking. I took the weekend off from blogging so I could write a super duper long post today to get your through your Tuesday-feels-like-a-Monday. See how much I care?

Let’s see, when we last left the Adventures of B.o.B., I was getting ready to ride a bicycle for the first time in 18 years. I got up early on Saturday and decided to go meet the group. I figure if I can’t run I’ll at least try to maintain some normalcy while riding a bike at the butt crack of dawn.

It was nice not to pack pounds of running stuff and have a caffeinated beverage. Our route is a 4 1/2 out and back and at 5 AM, it’s very dark. I wore my Miner 49-er headlamp and let the runners get a big lead before I took off (I didn’t want them to see me bust my butt immediately). I was seventeen kinds of wobbly. To start off I did some small laps around the parking lot. I was making really wide turns and kept hearing this person say, “Whoa! Whoa! Whooooa!”

Ok, so that person was me.

I am not going to lie. The first 4 1/2 miles were a white knuckle ride. My forearms were sore the next day from the death grip I had on the handle bars. My shoulders are still a bit sore and my butt feels like I did 790 squats.

I was like the BRA mascot as I took photos and wrote some birthday messages in chalk on the sidewalk for Jesus John’s daughter who runs the same route with her cross country team. I wound up riding 22 miles and probably could have been fine only doing half of that. But I wanted to get the cardio in.

Since I don’t have a bike I borrowed my step moms. She and my dad used to ride bikes around Sanibel Island and thus she had this awesome little horn put on. (Much to some of the BRA members dismay delight.) 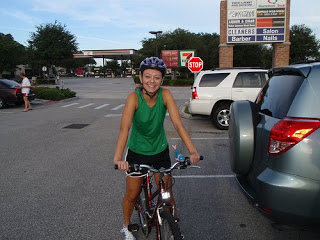 Saturday after the ride, my sister and I went to the Gator game. The Gators won, no surprise there and we had an awesome time. In the car ride home we had a Michael Jackson concert. I am sure we sounded amazing. 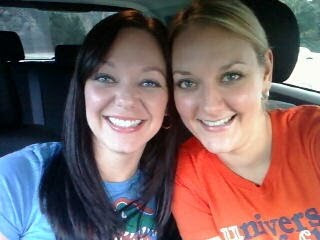 Sunday, I tried out some aqua jogging. Let me tell you what, it’s very weird. Navy Steve let me borrow his floaty belt (Thanks Steve!). You put this foam flotation device around your waist and it holds you up-right while you run. Your arms and legs are going as fast as they can and you are maybe moving forward at about a 30 minute mile pace. Can you say turtle-y?My first mistake of aqua jogging was that I attempted it at the “Compton” pool and it didn’t work out so well. There were kids cannonball-ing on my head and Marco Polo-ing all over the place. Plus their parents were smoking cigs, drinking 40’s, and staring at me like I had 22 heads. Monday morning, I decided to get to the “Compton” pool before it turned into family fun day. It was a much smarter decision as I got 30 minutes of aqua jogging in. Yes, it’s boring, but I feel that it helps. Obviously, my ankle is still not right and I am debating seeing an actual doctor. Not sure what they would tell me other than, “Stay off it. Rest. Blah blah blah.”Also yesterday Coach Tom and V had a pool party. It was quite fun and a lot of the BRA showed up. We watched The Spirit of the Marathon and had delish snacks and such. Party animals for sure. Other than the ankle, it was a great weekend. (If you are still reading this then you might be suffering from long weekend-itis.) I will be checking out your blogs today. I hope you all had a very un-laborious Labor Day!