If you have been reading this blog for any amount of time, then you more than likely know about Lloyd.

Lloyd Doggler to be exact. 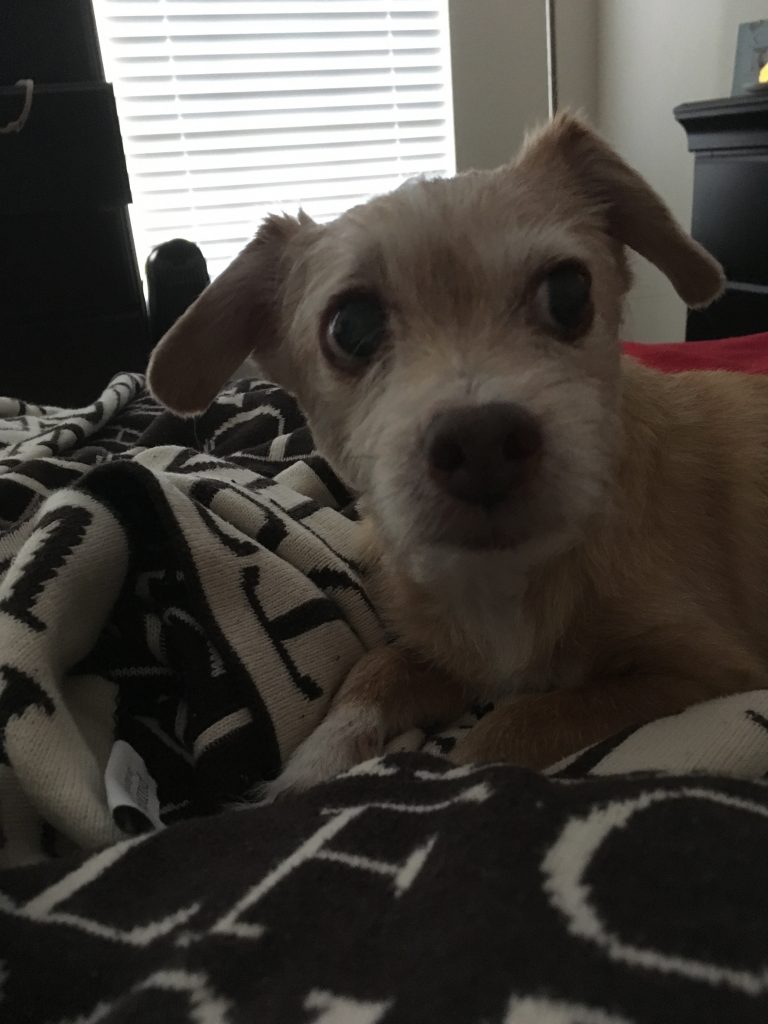 Lloyd and I found each other in the summer of 2001. I was 21 and he was approximately a year old (so mentally we were about the same age). We met at a Petsmart adoption where various little dogs were hanging out to find their forever homes. He was the only one in a crate not barking or losing his small doggie mind. I took one look at him in all of his shaggy glory and asked to see him.

Lloyd was plucked from his crate and as we both got down on the floor he walked over to where I was sitting cross legged, and as if that spot in the crook of my legs was meant especially for him, he climbed right in and sat down. That’s the moment I knew. He had picked me as much as I had picked him.

I picked him up from his foster home and I took him home to my parent’s house. I was staying with them for the summer before heading back to college in the fall. He was so shy! Several times he and I lay on the floor together while I fed him one piece of food at a time.

Previous to living with me Lloyd was a stray. His papers noted he was “timid.” And he was at first. He didn’t come when called and there were numerous occasions that first year or two where if he got outside he’d run and run and run. I chased him around my neighborhood more than once and a poor ex boyfriend chased him around a lake. I also remember one time he came upon a dead bird in the grass and decided it would make a lovely cologne. He immediately got a bath and I thought it was so funny.

He was timid with others for a time, but he became much more outgoing as he learned I wouldn’t allow anyone to even look at him sideways. He was always safe with me. I really wanted him to know that. He learned to come when called as it meant belly rubs, pats, and treats.

He also didn’t know how to bark. Until I stupidly “taught” him to speak. Oh boy, did he learn how to speak. He had an amazingly loud and big bark slash howl for a little dog. My friend Bill says it was one of his favorite things about Lloyd.

Lloyd stayed with many friends and family members over the years when I traveled or worked long hours. He hated to be alone but didn’t want to cuddle. He just liked knowing someone was there. Especially if that someone was me. When we were together, he never left my side. I sometimes felt badly when I was cleaning because he didn’t get to sit down as I went from room to room. I really don’t think he minded. He liked being with me as much as I liked being with him.

People loved Lloyd. All of his vets, groomers and sitters adored him. He was a great little dog with a sweet disposition and loved to play before he got into his senior years. He could tear up a stuffed toy with the best of them.

Toward the end he just didn’t have the quality of life that every dog should have so I had to make that tough decision. On the one hand, it was just awful to have to decide, but on the other, I knew he was ready. He was suffering and that hurt me more than anything.

Lloyd lived a good, long life. Obviously, with our pets it’s never long enough, but I’m really fortunate to have had him for as long as I did.

As you read this, if you have a pet, you are nodding in agreement with some of these general dog traits. They often choose us and want to be wherever we are. I’ve found myself wanting to hug other people’s dogs a lot lately, but it’s not quite the same. They aren’t my dog and I’m not their person. The hardest part is coming home to no wiggly butt and happy tail wagging. I’m not quite ready for another pet, but I know I will be eventually. I love animals and that’s not going away.

I just can’t imagine going through that heart wrenching day another time.

To those of you who sent cards and condolences, thank you. I know a lot of you loved him from the internet and he loved you right back.