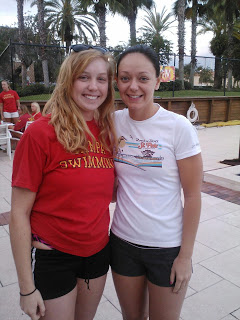 On Saturday I competed in my first ever Master’s swim meet. It was hosted by the ever smokin’ hot lovely University of Tampa swim team. My swim coach and friend Kelsey, who is a UT alumnus and part fish, was there to compete as well. It helped that she was there because I asked her 900 times about starting off of the blocks. Since the blocks at UT are a lot higher than standard the meet was about 60/40 on people starting off of them versus starting off the side of the pool.
I wound up scratching the 50 because, quite frankly, I was going to get smoked. This left me with the 100 meter free and the 500 meter free. As I sat around watching the other events and haging with Kelsey and some of the other alum,who happen to be in their 20’s I learned a few things.
1. “Meet” swimmers hate the 500. It’s a super long swim to them apparently. It’s like a bunch of 5Kers discussing the marathon. Hate. It. (This helped me out a ton.)
2. Swimmers don’t like running. I spoke with a group of men about an upcoming race I was helping promote and no sooner did I say run then one of them said, “Running is bad for your knees!” Spoken like true swimmers.
3. Twenty-three year old college grads complain about being old and out of shape. Bastards.
4. Olympic gold medalists are bad ass and you should forever be thankful if they are not in your events.
Brooke Bennett, three time olympic medalist, showed up to suppor the team and swam in two events. She was amazing to watch. She was competing against women fresh out of college who are no slouches, I mean these are all fantastic swimmers and she just blew by them. True talent like that is just so crazy to watch close up. I chatted her up a bit before she left and she’s a very nice lady. We swam on the same club team in high school although I’m 99% certain she had zero clue who I was. Heh.
For my first event, the 100 meter freestyle. I was nervous. I was mostly concerned about those damn high ass blocks. Coach Kelsey made my goggles real tight for me and that did the trick. I climbed up. Took my mark, and dove in. As soon as I hit the water I was balls out swimming. So. Fast. So. Hard. Going to die. Going. To. Puke. Where is the wall?!?! This. Effing. Suuuuuuucks.
To say that I almost killed myself on that 100 would be an understatement. By the time I got to the second fifty flip turn I was sucking major wind. I may have used that flip turn for a tiny break. Now, I happened to be one fo the slowest swimmers in the fastest heat and I could see the ladies next to me at least one to two body lengths ahead. These women were hauling ass. When I finished, I thought my heart was going to explode. I checked the clock and swam a 1:10. I am super happy with this time even if I did come in 3rd or 4th to last. It was still good enough for a 1st place in my age group, of two. I’ll take it.
After I got my heart rate down I had a short break and then it was time for the 500. Thank. God. I was so looking forward to getting into a groove and just swimming. Again, I’d like to point out just how unpopular the 500 is. There was one heat and when I got to the blocks all three ladies I was swimming with said screw the blocks and started off of the pool’s side. When in Rome, right? I started off the pool side too.
My goal was to swim 1:30/100 and I was feeling good with this. I love having the laps counted for me and laughed as I heard Coach Kelsey and young hotties her buds cheering for me. I really enjoyed this swim. I had a feeling I could win the event by looking at the seed times. Fortunately, Brooke Bennett didn’t swim the 500 and no one snuck into this event last minute. Whew! I did win this event but like any race, it just matters who shows up.
What I took the most out of this whole day was to step outside of my comfort zone. Sure, I swam in high school about a billion years ago but I wasn’t the best on the team and I wasn’t nearly good enough to swim at college. I would advise all of you to leave your comfort zone. Magical things can happen. I mean hell, maybe I’ll do a crit one day. Baby steps…..
Happy Monday! What have you done to step outside that comfort zone?