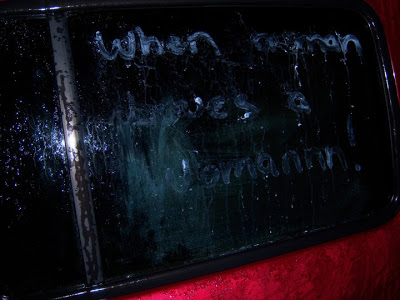 It’s not everyday you see a blog with the title Michael Bolton, is it? Well today I had no choice but to title my post that way.
You see, a little bit ago I was having a conversation on facebook about the movie Office Space. I’m pretty sure I used these quotes from the movie:
“Michael Bolton: Yeah, well, at least your name isn’t Michael Bolton.
Samir: You know, there’s nothing wrong with that name.
Michael Bolton: There *was* nothing wrong with it… until I was about twelve years old and that no-talent ass clown became famous and started winning Grammys.
Samir: Hmm… well, why don’t you just go by Mike instead of Michael?
Michael Bolton: No way! Why should I change? He’s the one who sucks. ”
Well lo and behold, I woke up early this morning to head to the Y for my swim and when I get to my car I notice that it has writing on it. At first I think, “Is this my car?” But then I start reading.

When a man loves a woman….. 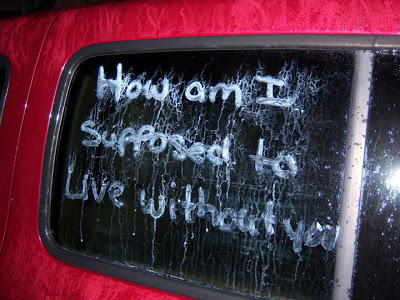 How am I supposed to live without you….
Apparently these pranksters enjoyed my movie quoting so much and admired my love of Michael Bolton they decided to paint my car windows to show their appreciation.
And that my friends is one of the best April Fool’s pranks that has ever been played on me. I love it! Unfortunately it was a rainy night so some of the lettering was smudged but the pranksters really got all of his hits down pat.
Happy April Fool’s and Friday. Have a great weekend! Dueces.