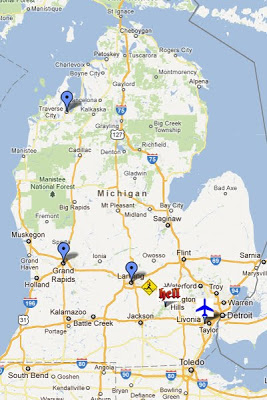 And I’m back in Florida after a most lovely and winterful vacation to the mitten (that means Michigan cause it’s shaped like a mitten, get it?). I flew up on Thursday night and had a great long weekend visiting one of my bestest friends and her fiance, who is very nearly a bestie at this point. Love him. You all may know them as Red and Spike.

The Tour de Mitten began on Friday with a drive up to Grand Rapids.

Our stop in Grand Rapids was to check out the wedding venue and the famous artwork “La Grande Vitesse.” We then drove to Traverse City for the Winter Wow Fest. This festival was totally my idea and I must have said how ridiculous the 5K portion of that idea was about nine hundred times while running said 5K.

The driving portion required copious amounts of snacks. Ok, let’s be honest here, these aren’t snacks. They are sugar comas waiting to happen. At least there is a water in this photo. I probably should have just gotten a diet coke to wash it all down. Cause you know…diet coke is totally the calorie savor. 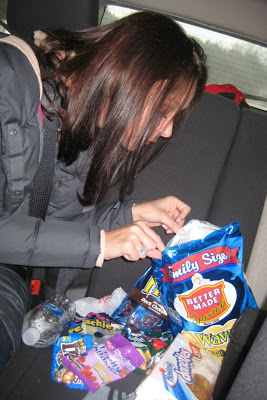 Upon arrival in Traverse City there wasn’t much by way of snow but there was this ice on the railings by the lake. And since I was triple dog dared… 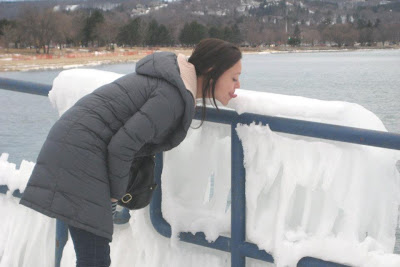 After we ate dinner (Yay Mexican and margaritas before a 5K!) it was flurrying a bit and I hoped for some snow in the morning. Sure enough, Saturday morning I woke to an excited Red telling me to look outside. I squealed in delight at the beautiful white blanket that covered the ground. I’m such a Floridian. 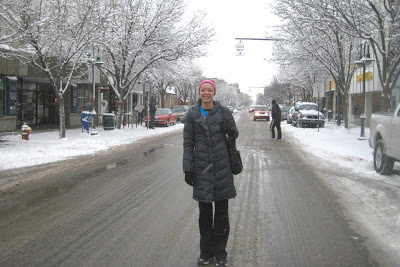 Pre-5K we filled up on cherry pancakes, since Traverse City is the cherry capital and we all wanted to be certain we’d crap our pants half way through the race. Heh. Go read the race report HERE and come back. Yes, I’m the idiot who thought a 5K in the snow would be a great idea. Did I mention it was a 4 loop course? And no, it wasn’t in a living room, but nice thought Gatorate.

With the 4 loop race completed and with the help of a small child, I made my very first snow angel. 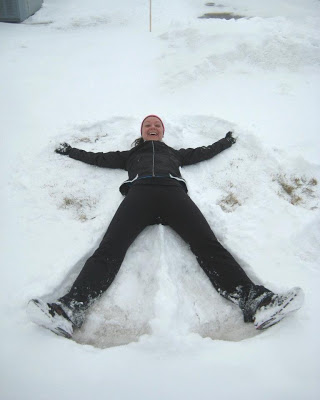 We did a little shopping in Traverse City and stopped to take some photos. They included this awesome hand puppet fight that Spike and I got into. There was no honey badger so I chose the squirrel and bested Spike’s porcupine with the flying squirrel attack. Flawless victory! 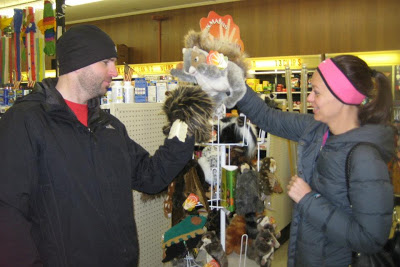 We left Traverse City and headed toward Lansing where we ate entirely too much sushi. Or not enough. It was one of the two. And on Sunday there was some church going and some family time with the Spikes. I’m totally prepared for the upcoming nuptials now and know everyone’s name by heart. Score!

The final stop of the tour on Sunday was to Hell which is pretty odd since we went to church and then Hell. That doesn’t seem normal but oh well. We’re all a little kooky. 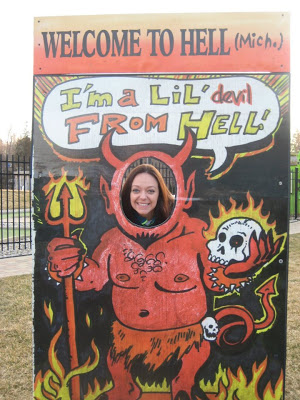 I had such a total blast in Michigan and am so happy I got to see so much snow! It was perfect! I also ate and drank entirely too much and must now detox. That little 5K didn’t even put a dent in what I did. But it was vacation and it was exactly what the doctor ordered. Thanks again Red and Spike, I love you guys!

Happy President’s Day all! Lloyd and I have lots of snuggling time to catch up on.