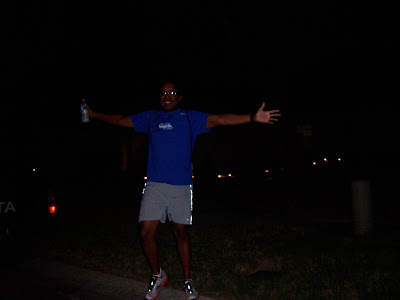 Let me start by saying Happy 4th of July! I hope you all are enjoying sparklers safely and some delicious summertime treats. I had Waffle House. Heh.

Let’s see, I signed up for a midnight 10K cause it seemed like a good idea at the time. This was until I remembered that I like to go to bed when the street lights come on and was sleepy at 8PM. Oops. So I had a Crystal Light Energy water packet thingy and I felt much more awake.

Caribbean Steve and I carpooled to the race which was about an hour away. The race took place in Dunedin, FL, which is north of Clearwater Beach, FL, if you know the geography. In any event, it’s very close to the water. Thus, it’s as humid as something really humid. An analogy I can’t think of right now. It rained prior to the race start but it didn’t help lower the hot, humid climate. Oh, and it’s dark at midnight.

There is a person in this photo, I swear. It’s Caribbean Steve, but well, he’s dark and it’s dark and thus…I swear he’s smiling.

This race has been held for 32 years now and I can understand why, although, I don’t know if I’ll be insane enough to run it again next year. It’s a nice little course onto Honeymoon Island and back and it’s lit by very pretty luminaries. But, as I mentioned it’s as humid as a rain forest? (That’s the best I got right now. Work with me.) 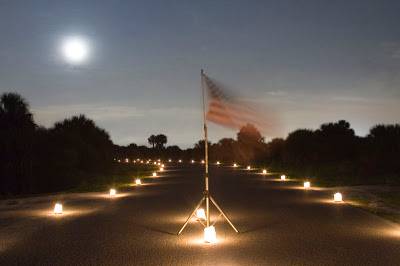 There is a 1 mile run and a 5K in addition to the 10K. I chose the 10K because it was slated to start at or a little after midnight. I watched the 5K racers come in and noticed one very fast woman running about a sub 20 minutes or so. I would see her, or rather the back of her again.

Before the race started I stated I didn’t really want to “race” so I tried to reign in it the first mile. Yeah, we all know how well that works out. Within the next two miles I was racing. I am fairly certain I PR’d my 5K at the first half of this race. Oops again. But I felt ok and kept pushing. There were small bridges to climb and you all know I hate a hill but again, I just kept pushing. The good thing about this race is that I’ve actually never run a 10K race and I would PR no matter what. Woot!

It was at about this point I realized that the super fast woman from the 5K was ahead of me. PUSHING THREE CHILDREN IN A TRIPLE WIDE STROLLER. And she was basically leaving me in the dust. Yeah, that was awesome. (I told her congrats after cause she really kicked ass!)

I ran along in the dark and finally reached the 4 mile mark. I was BEAT at this point but just tried to focus on the dark shapes of runners in front of me. I thought of us as comrades just trying to survive this humid ass race. When I hit the 5 mile mark I was slowing down some and thought about how effing humid it was and how I’d never do this damn race again. Hahaha!

Just when I started to think, “Man, I wish someone would hop in and pace me,” my new running buddy Sunny hopped in and helped me get the last quarter of the race to the finish. Thank the lord for her! She was a great pacer and said, “Don’t talk! Just conserve your energy! You’re almost there! You’re doing great!” It was awesome.

I finally got to the final turn and thought “Hallelujah!” I finished and felt mildly pukey as I shakily walked to get some water. My finish time was 50:13 on my Garmin, but I don’t know what the “official chip time” was. I’ll have to post it later. But I did get this…. 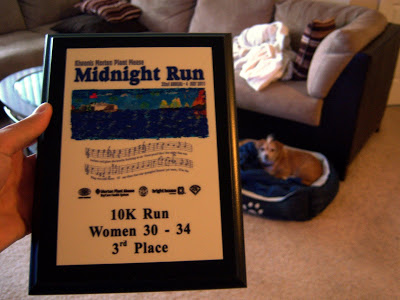 Third place in my age group was pretty sweet, considering I think this race was fairly competitive as evidenced by the Kara Goucher-esque lady pushing three kids. I had a great time seeing a bunch of friends from the running group, but MAN this race was HUMID. I’ll probably get sucked into again next year though. We know how I roll.
UPDATE: Official time was 50:24.