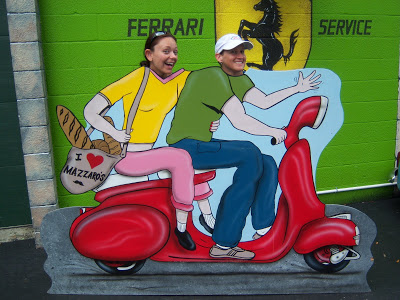 In today’s Monday Mash-Up we find our heroine, B.o.B., re-evaluating her upcoming race goals and reviewing her long weekend of awesomeness. Let’s join her now…..

For those of you on the facebook page, which you can find HERE, you already know that I’m having some shin pain and cut my long run short on Saturday. While I am not overly concerned, I am overly cautious. Could I have kept running? Does a fat baby poop? Yes. But, do I want to make it worse and risk being really injured? Does this guy like cheap beer? No. So I cut the run short and have been R.I.C.E.-ing. It feels like a bruise on the top of my shin bone and since I am Dr. B.o.B. WebMd, I think it’s just a shin splint, but not something to mess around with.

I have set a pretty unrealistic aggressive goal for the 1/2 marathon I’m running as part of the Ironman 70.3 Augusta relay in September but I’m thinking about scaling it back some because my A race for this running season is going to be the Miami Marathon. I’d hate to take myself out of the marathon because of injury and just have a fun race in Augusta. For now, I’m on high alert and Dolly (my bicycle) couldn’t be happier as she knows she’ll get some much needed quality time.

I am happy to report that KC and I met up on Friday and headed to The Ocean for a lovely OWS. I don’t know why I like to capitalize The Ocean, but it just feels right so I do, k? I digress.

It was, in fact, lovely at The Ocean. Well, all but the swim part. Have you ever felt like you were swimming on a treadmill? That’s kind of how this swim went. We were like those dumb-basses who swim upstream to get their spawning action on only to be eaten by bears. Heh. Ok, so we didn’t get eaten by bears but I only made it a half mile before I called it quits. Since KC is a major bad ass, not to be confused with dumb-bass, and has a small race coming up she went the whole mile. Overachiever.

For our post swim lunch we headed to this AMAZING Italian market/deli in St. Petersburg called Mazzaro’s. If you are ever in the area it’s a must do. You can even take a photo like this:

Yep, I made her be the dude. But seriously, how amazing are those pink pants?

After Saturday’s short run and fatty buffet dinner small-salad-hold-the-dressing for dinner, I had no choice but to hit the pool hard on Sunday and take Dolly for a ride after that. I was feeling really great during my swim and realized it was because unlike most Sundays, I had slept in and rode AFTER the swim. I’ll have to remember that so I can alternate those work outs more often. Although the Sunday post swim ride was H-O-T.

And that my friends is how B.o.B. spent her weekend. On a final random and yet still fun note, my most recent interview is up over at the Arctic Ease blog. I interviewed this really cool guy from Crossfit in Austin, TX. I admit I was skeptical about Crossfit because everyone I know who presently does it looks like they could kick my butt with their pinkie finger but after speaking with this guy, I may need to look up a class and get my truck pulling on. Anyone ever done the Crossfit?

One final thing, SHOUT OUT to those who did the Boulder 70.3 yesterday. I heard it was HOT as a mutha. Congrats to the team of Tri-Living…Together. They finished under some brutal conditions. Well done you two!