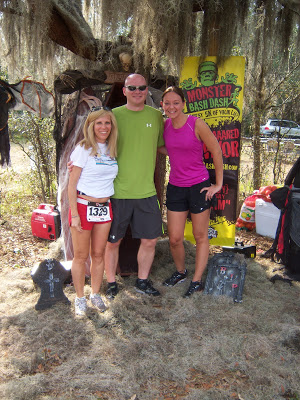 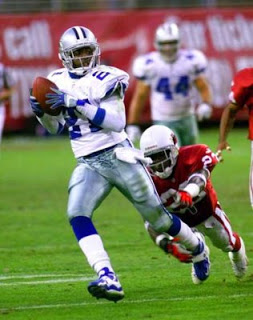 I was faking left and right and back and forth. I did some spin moves just for the hell of it and made a very quick sprint out of that field. I kept my flag and probably over did it with the hammy, but dam it was fun. Suck it monsters.
This is the longest 5K recap ever. Sheesh. Sorry about that.
Anyway, as we got to yet another monster area I was told to put both of my flags on the outside since they had shifted to the front of my belt. No sooner had I done that did I get one of them taken away. Grrr!
We were so close to being finished that I really just wanted to finish with at least one flag. I wasn’t sure if I needed both to get the special “Survivor” t-shirt, but I was going to damn sure try.
With the little girl still at my side we made it past a few more monsters and headed toward the final finish area. I felt bad when a kiddie zombie came at me and I quick stepped backward which sent him sliding on his belly into a pile of leaves. I basically jumped over him and kept moving. Sorry kid. This flag is mine.
The last dude to really come at me was The Grim Reaper. He DID NOT want me to cross that finish line with a flag. I felt certain he was going to get it and I’d have no choice but to get the “I became the walking dead” t-shirt. Just as he came at me and I thought I’d see the end of this flag the little boy from earlier jumped in front of me and guarded me in to the finish. It was amazing. He had no flags left and yet here he was protecting little old me.

I crossed the finish line and handed over my one remaining flag. I was handed my medal and a ticket to go pick up the special “Survivor” t-shirt. That’s right. Suck it monsters.

This was such a fun race. I’d definitely recommend you all try out a “flag” style race. Fortunately, I didn’t seem to make my leg worse although it was grouchy after this morning’s swim. Happy Tuesday! I hope you all had great Memorial Day weekends.