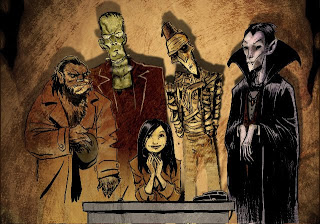 First off, special thanks to Coach EK and Navy Steve for their reports. I have been chilling out, not blogging and just perusing everyone else’s. It’s been kind of nice actually. But….I’m back and because Halloween is tomorrow AND my Half Marathon is tomorrow I shall combine the two in this one little old post.

If Halloween Monsters were in a running group this is how it would go down at a meeting.
Dracula would of course be the running club President, however, he only hosts meetings at night and only runs the night time races. He loves a 5K and is always surrounded by the ladies. He likes all the new gadgets, but because he is so old he has a hard time using them. “Blaaaah! Blaaah! Stoooopeeed Garmin!”
While Drac is holding business, Werewolf is getting drunk on beer and eating way more pizza than anyone else. He likes the marathon and always PR’s by chasing the fastest folks. (To his credit, he usually helps them PR as well). Running club members complain about his constant burping on runs and wish he’d use a bit more deodorant. Our Werewolf is not nearly as sophisticated as the one sung about by Warren Zevon.
The Mummy is trying to pay attention to Drac’s upcoming events and training plans but is also using his wrappings to help Wolfie keep clean. Mummy likes to use the Galloway Method as he’s a bit stiff in the joints. He is well liked by the group and always adds a helpful groan of support here and there. Another well liked member is Frankenstein’s monster.
Frankie (as is his group nickname), is also a Galloway runner. He and Mummy make an excellent training pair. However, Frankie sometimes gets side tracked during races when he stops to pick flowers or smile at small children. At this meeting he is helping a member with her shin splints by using his electrodes as an ultra sound. “Running goooood! Shin splints baaad!”
The she that Frankie is helping, is none other than his lovely wife, The Bride of Frankenstein. She runs about a 6 minute mile and holds the group record for the marathon. Drac is the 5K record holder but can’t catch The Bride at the longer distances. She’s more like a runaway bride! She’s waiting for her turn to speak as she wants to discuss a charity event for small monsters with no beds to hide under, The Make-A-Squish Foundation.
While, The Creature from the Black Lagoon is more of a tri-monster, he comes out to the meetings and helps the others with their swimming technique. He also tells really bad pirate jokes.
There are lots of other monsters and ghouls and goblins and witches at this running group meeting and most everyone has been training for the upcoming Halloween Halfathon.
In fact, the B.o.B.monster will be there.

Happy Halloween all! I’ll post the race report this weekend. Best of luck to all training, racing, and trick-or-treating this weekend. Hope your Halloween is a Scream! (Hardy har har)