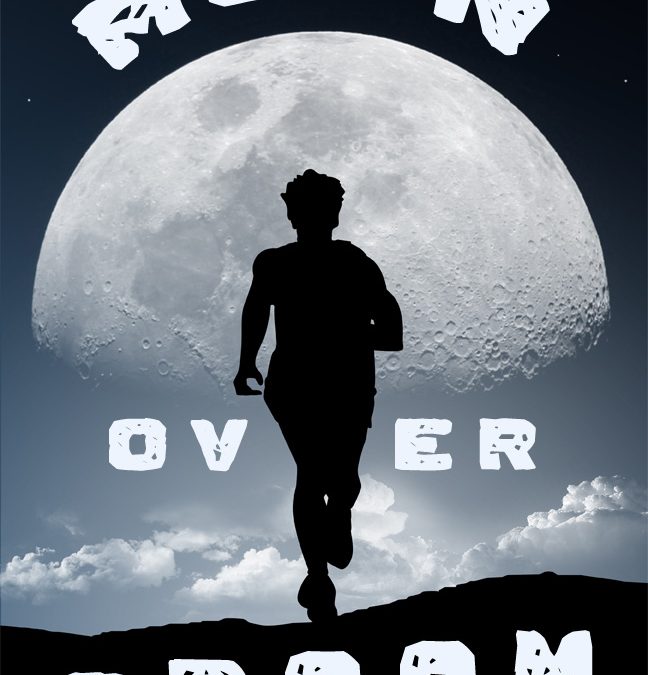 On Saturday I ran my second trail race ever. And it was in the dark. And guess what? I loved it!

I had signed up for this event thinking I would be running by myself but I was happily surprised when my friend Caitlin from Fit and Feminist and her husband Brian also signed up. We decided to carpool over to the race which is about an hour and a half north of us. The race, Moon Over Croom, offers three distances but we all decided to stick with the seven miler.

As we drove, we discussed race strategy. Brian proclaimed we’d start slow and then as we ran, go slower. We all agreed that this was a good idea since we were out to have a little fun and not break our faces running in the dark on a trail known for many hidden roots.

We arrived and got ready with our various headlamps and handheld lights. In case you didn’t know, it’s a super sexy look. 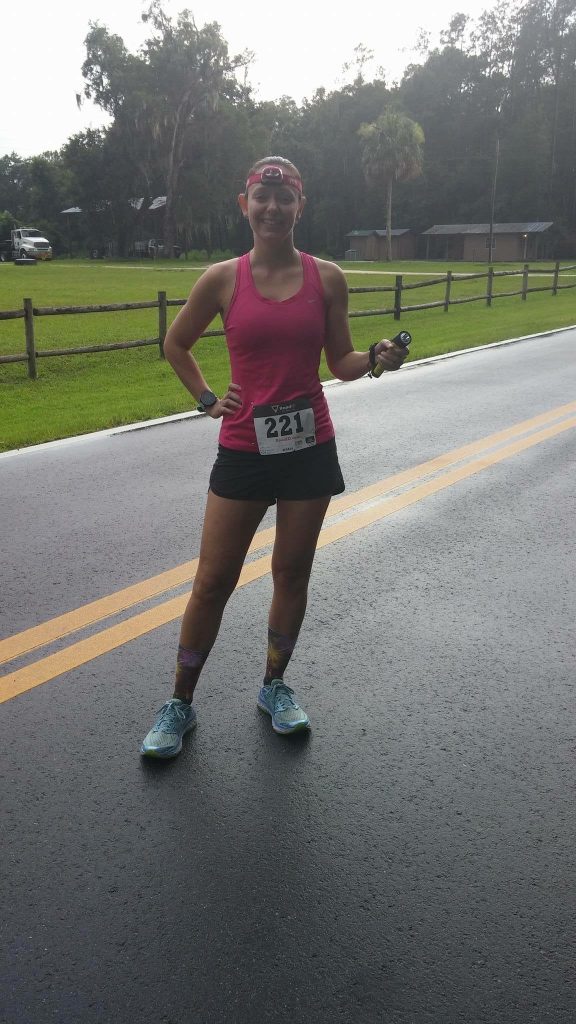 We picked up our packets and moseyed around the camp that served as race start and finish. I got to see several friends who were either running the seven, 14, or god bless them, 21 miles. I did see my TBFF (trail best friend forever) Laura but didn’t snap a pic! Wish I had. Next time Laura! 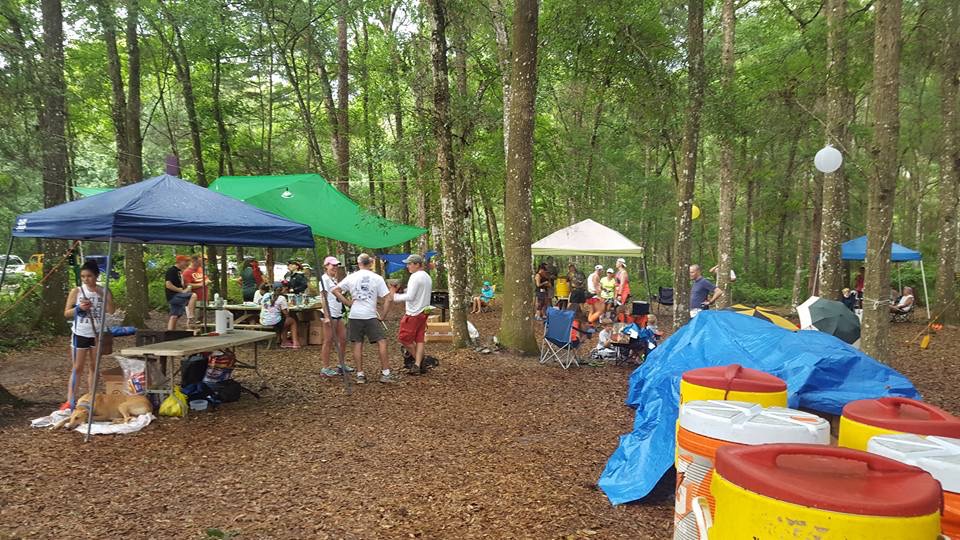 After the 21 milers and the 14 milers got sent off in their respective waves it was time for us seven miles to hit the trail promptly at 8 PM. It’s a looped course so we did get to see some of those racers coming back through camp. The front guys and gals were flying. I’m so impressed by how fast they move considering the terrain.

As soon as we started running, my Type A personality got the best of me and we ran a lot faster than we had discussed. I knew Caitlin and Brian would have no trouble since they are both studs and they just laughed at me for pushing the pace. Part of this was because I didn’t know this trail at all and had heard it wasn’t that tough. Whoever told me that was a liar. I didn’t realize it had so much climbing and descending.

Fortunately, for my lungs and legs, we stopped a few times for selfies and at the two water stops. Plus, once or twice we slowed because, well, I was dying. Haha! 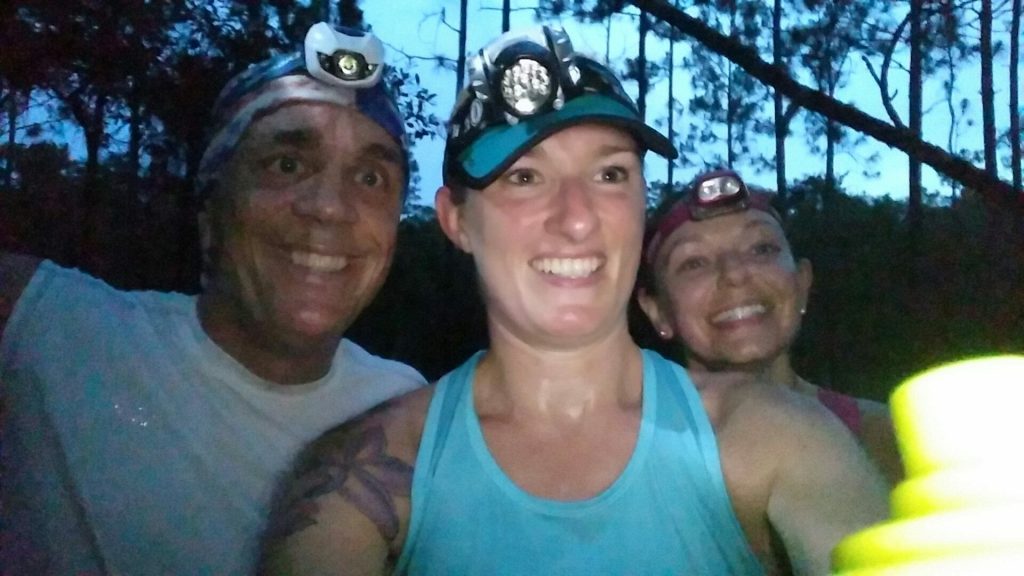 This selfie is right before it got VERY dark. The trail itself got a little crazy after we hit mile four. There was one section that was a deep rut with tons of roots and leaves. It was treacherous and I loved it. We’d speed up and slow down as needed and got passed a lot toward the end. 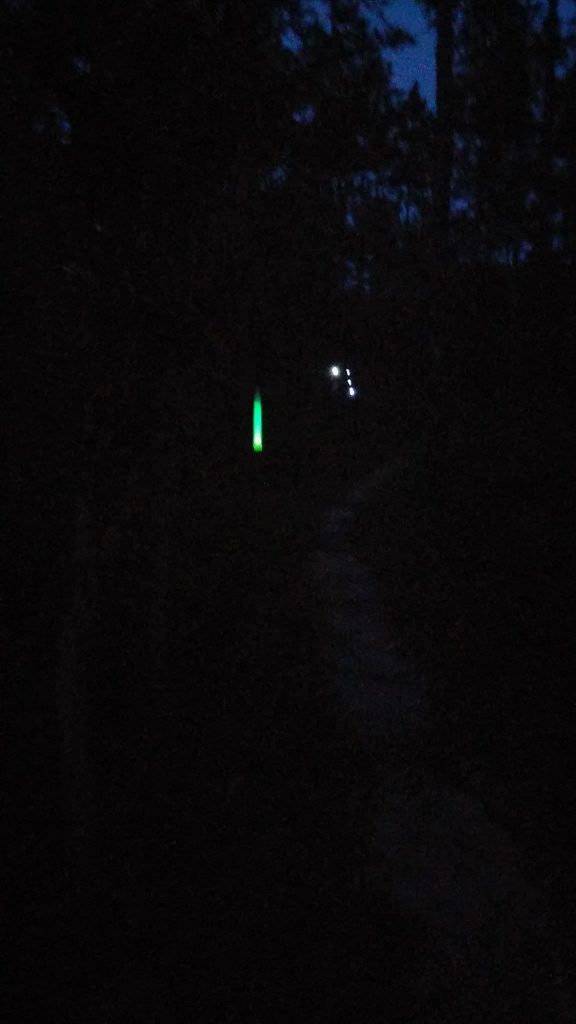 The trail was marked with glow sticks and in this shot, you can see some headlamps of other runners coming toward us. We had no issues going the right way and I can attribute most of that to Brian leading us when it got super dark. The handheld light I bought came in very handy as it was much brighter than mine or Caitlin’s headlamps. Running with Caitlin and Brian was so much fun that I was sad the miles were going by so quickly. I didn’t want the race to end!

Everyone warned us that once we passed the power lines, which is a little less than a mile to the finish, the trail became extra root-y. And man, they weren’t lying. We moved over a bunch to let people pass and saw one woman go down pretty hard. She seemed OK though so that was good. She popped right back up and kept moving. We decided we didn’t want to take ourselves out for this race and played it very safe the last 3/4 of a mile to the finish line. 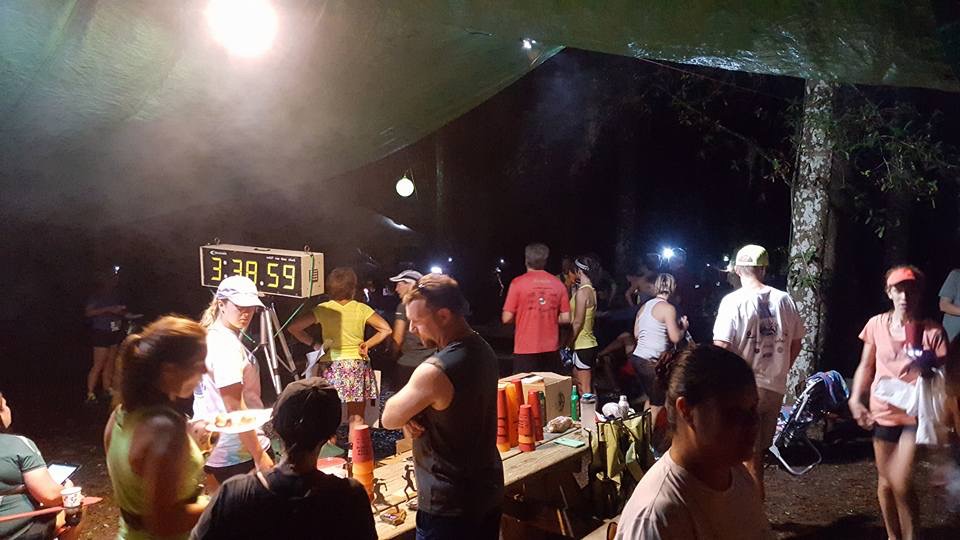 Caitlin and I ran as soon as we could see the finish line lights and Brian who had gone a bit ahead cheered us in. It was so much fun! We all grabbed some soda and headed to the car to change and hit the road. I knew that it was way past my bedtime so staying much later would result in me sleeping on the car ride home.

I can’t wait to do this race again next summer! I think I may even step it up to the 14 and try to run the whole thing. Well, maybe not that last mile….