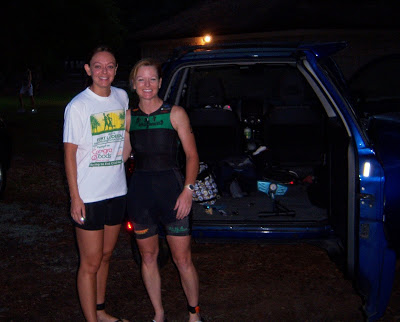 The above photo is me and Cay-See before the start of the race. She and I were the only two folks I knew doing this “Olympic” distance triathlon in Moss Park in Orlando, FL. We had headed over Saturday in the late afternoon and had dinner at one of my most favorite restaurants, Dexter’s. Look it up if you are in Orlando. (The brunch is to die for!)

Since this race was so small we couldn’t quite tell if there was a packet pick up the day before so we opted for the morning of pick up. We picked up our packets and I immediately noticed that I didn’t get a shirt. I guess the first two hundred did, but this included the sprint and du race as well. Guess I was late. Oh well. We also noticed that we didn’t have running numbers. We found out that our marked up arms and legs were good enough. Sweet! One less thing to worry about at transition.

We all lined up in the water and the men folk were off and going by 7 AMish and the ladies followed shortly after.

This was the first swim start that I’ve done that began waist deep in the water. We waded in and since it was such a small group all of the women started together. Without much ado, we were off.

The course was a double loop. Again, new for me. But I figured, two loops in a lake? I can do that. My start in the water wasn’t as good as I’d hoped because I got a big splash when I took my first breath and my goggles were foggy. I stopped and adjusted and then kept on moving. I made my way in front of folks and was successfully around twice before I even realized it. Pretty run of the mill swim here. It seemed easy and I felt good. Lake swims rule and ocean swims drool! That’s all I’m saying.

Upon checking my time yesterday I am guessing it was short. I definitely know I am strong on the swim, but holy crap! I don’t think I am this fast. I will say I was first out of the water in my age group! Hooray for swimming! Full disclosure: my age group only had 4 people in it, but whatevs. 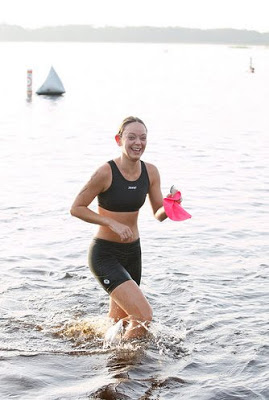 T1: They did something odd with this transition that I don’t really understand, if any of you do, leave me a note in the comments. It was split up into two times. It says “Run1TM 2:07” AND “T1TM1:39.” There was a bit of a run to get to transition so I can only assume they counted that separately. Once I got to the bike I tried to move as quickly as I could but I admit that I drank some water and ate some of my chomps. I need to do that stuff on the bike.

The Bike 40K (definitely not)

I figure you are noticing that my distances have some parentheses behind them. It’s because this event had shorter distances than what was posted, but I’ve been told this happens in the “international” or “Olympic” race. They just get them as close as they can but aren’t exact for logistics.

Of course I wouldn’t be “discom-bob-ulated” if I had everything go right with this race. Thus, I couldn’t get my foot clipped in at the bike mounting area. I think I wasn’t putting enough weight on my clip and a heavily accented Hispanic man who was working the event was yelling at me, “What are you doing? Hurry! Get your foot in! Push!” It was funny. I got clipped in and was off.

The bike course was also two loops. Actually the theme of the whole race was two loops. I REALLY enjoyed this ride. It was the weirdest thing. For once, I was enjoying the bike and passing a few people! I saw a lady with a 31 (my age) on her calf go by me and I thought, I gotta keep her in my sights. And I did. I just kept pedalling and only allowed myself a break on turns.

Eventually, I caught this lady and kept her far enough behind me so if she did catch me I could try to make up for it on the run. I also played chicken with two squirrels (you little rat-cousin bastards!) and I saw a spotted, little deer looking very scared. Thank the lord he was behind me and not in front of me! Cay-See had told me on the way out to the race that they are dumbs as rocks and have been known to cause accidents on bikes. It made me think of My Cousin Vinny though. Heh. 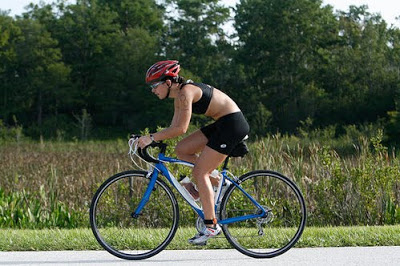 T2: I actually sat my butt down here to change shoes and wonder why I never did this before. I usually try to stand and change shoes but I’m just so awkward doing so. I guess I really need to improve on transitions cause looking at everyone else’s…damn I’m slow. My time was 1:48.

The Run 5.6 miles (the race website actually shows this as the distance, so no guessing here)

As I mentioned before this race was all about loops. Thus, there were two loops on the run too. The first loop wasn’t too bad. The website for the race noted lots of shade and while there was that it was still hot. No breeze to speak of and I felt dead by mile three. The course wound around the park and ran by some RVs as well as through some trail and some dirt. There were plenty of water stops and the volunteers were very nice and encouraging. I passed a few people on the run, one in my age group right off the bike. I definitely felt myself slowing down near the end and remembered much to my surprise how great I felt on the bike. Of course, I was still able to cheese for photos. 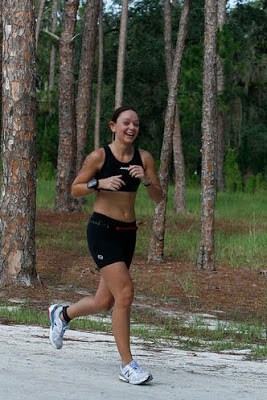 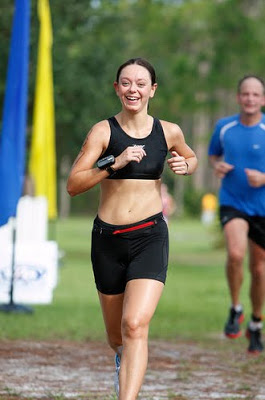 Final Thoughts: FINALLY! I am very happy with this race. I felt like I needed this one to go smoothly cause I was seriously starting to question myself in this distance. I needed a confidence booster. I needed a race where I didn’t finish feeling like I was going to cry or pass out or puke. I also needed a race where Dolly and I felt good and didn’t battle each other.

The only downside to this race was no medal and no shirt. Had I not placed in my AG I would have left with zilch. In the grand scheme of things, it’s not a big deal because I enjoyed this race so much. Starting before 7:30AM was a blessing and it really helped keep the temps down during the ride and run. I’d recommend Moss Park to anyone looking for a small, well-organized race. It would be perfect for a first timer venturing into an Oly. In fact, the woman who won the Gasparilla 1/2 Mary was out there for her first Oly. Of course she came in 3rd over all and is really pretty and nice. How annoying. I kid, I kid.

Cay-See kicked major butt as per usual and took 4th in her age group. She is an amazing cyclist and has taught me a lot. Plus she totally points out all the hotties on Le Tour. I am super happy she did this tri with me or I would have been all by my lonesome out there.

As always, thanks for reading. I’m off to blog-stalk you all now so I can catch up with your lives. Toodles.