O swim fitness, where art thou? 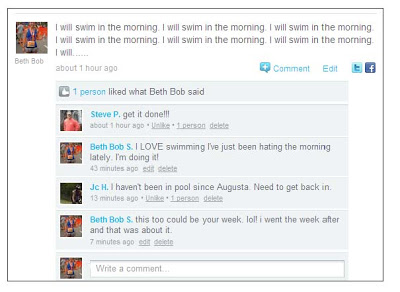 My note from daily mile yesterday looked like this:

And yes, I did swim.
Upon arrival dark and early this AM I was greeted by my master’s group with the comment, “Oh, someone’s making a cameo today.” Always nice to be chastised at 5:30 in the morning. And of course, they kid, because they care. And also because I have definitely missed a few weeks of swimming.
I had to cut the workout to 1,900 because it was kicking my butt. I have obviously lost some swim fitness and was getting smoked by the fast group. But, in general, I did ok. A guy who never misses a swim told me he used the analogy that swimming fitness is like metal. If you let it sit, it will dull quickly, but it shines right back up when you polish it.

I must be honest though, over the weekend I did NOT bike as I had intended. Tri season is going to be tough if I don’t get it together. I think it’s probably ok to take some time off and train how you feel and lately I’ve just felt like running. Yes, queue the Forrest Gump quote.

Tonight is the always arse kicking track work and I’m hopeful that I don’t feel like death due to the early morning swim. It’s crazy to think that during my half IM training I was doing two-a-days on the regular. Sheesh.
How do you stay on track in the off season? Is there even an off season? Duck season? Wabbit season?