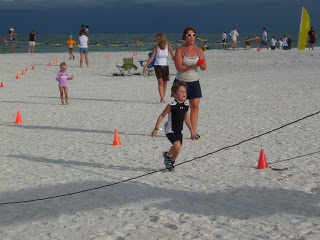 Today I completed my first biathlon. I ran-swam-ran my way through my first multisport event. It was fun, challenging, and as always discom-bob-ulated.

Let me set the Wayback Machine for a second before I go on. Let’s go Wayback to – yesterday. I completed my first 16 miler since my last marathon (Gasparilla Marathon, March 09). It was tough. I just wasn’t feeling it yesterday. Not sure if I drank too much water and G2 or if I took my Gu’s too soon/late but by mile 12 I was just not right. By mile 14 I was cursing like a person with tourettes. When we finally got to 16 I felt nauseated and weak. But I did it. I am going to chalk it up to being extra humid and well, just one of those runs.
Fast forward to today.
I woke up early (again) and headed out to Clearwater Beach for the Clearwater Beach Summer Biathlon. It was mainly a kids event but some adults participated as well. Actually when the race director sent me the participant list of adults it was a lot of kids and about 28 adults. One adult was an 86 year old man! I am not sure if I saw him but it seemed like a wide age group, considering that they counted ages 16 and up as adults.
When I arrived, sans sister who wound up bailing, I started up a conversation with a woman in line who looked like she knew what she was doing. I clearly did not. As it turns out her name is Stacey, and she has done five tri’s. As we got up to the table to get our shirts they ran out. Stacey was not having this. She went and found who ever was in charge and demanded they get me a shirt for my first biathlon. Thanks Stacey! I also ran into an old friend named Julie, who was racing as well. I felt relieved to have some gals to hang with.
We got all marked up with our numbers and such and watched the kids race. Oh my gosh, I am not normally a gusher but these kids were so stinkin’ cute. They had little ones starting at the age of five racing! Check out this little dude bringing it home:

And check these two out at the transition: 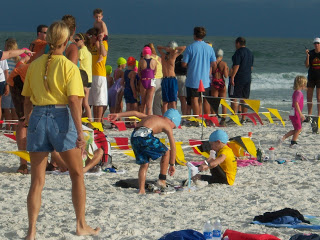 Here’s me prior to the race:

As you can see in this photo behind me, it was getting dark out due to an incoming storm. The water was looking rough and I was nervous. Fortunately I didn’t get a case of the P.C.’s. What are those? I haven’t told you all that yet? The P.C.’s are what some of us get prior to racing due to nerves. Also known as the Poopy Cramps.
At 9 AM they started the adults. We were to run 2 miles, swim 1/3 of a mile, and then run 2 miles. The plan for me was to wear a sports bra under my swimsuit and then remove my shorts for the swim. Then for the second transition I would put them back on so I didn’t have to run in my swimsuit with my booty out there jiggling for all to see.
I ran the first two miles entirely too fast. I was sucking wind by the time I got to the first transition. I was painfully slow at removing my shoes and socks and putting on my goggles and cap. As I ran toward the water I realized I still had my shorts on. Doh! I had no choice but to throw them at some random spectator who looked at me like my head was on fire.
The swim wasn’t anywhere near as bad I thought. I pictured cootie bungalows all over the place and people scraping me to get by. We were pretty spread out and I actually caught a few people on the swim. The water was rough and every time I popped my head up to see where I was going I was too far to the right of the buoys and had to swim back in to get on the left of them. I apparently have a hard time swimming in a straight line. I enjoyed the swim the most and just took my time with it.
I entered the transition again and my shorts were no where to be found. Sadly, I realized that I had to run the last two miles without them, butt cheeks flapping in the wind. The final run was a bit better paced and I just tried to get through it.
When I finished, the preliminary results said I came in as the 4th woman, but I think I was probably the 5th woman. It also said I was 11th overall but again, that’s just preliminary. I’ll update this when I get the actual results.
From the looks of it, Julie, Stacey and everyone had a great race! They gave us these really cute Livestrong dog tags as our finishers medals. The kids loved em too.
This photo is just after the race. I had to crop it because I was still without shorts and am not quite ready for the blogosphere to have access to my thighs. Hehehe.
Me, Stacey, and Julie – Biathletes!

One more thing, my chip time was 41:05. I have no idea what the splits were but I’ll update if I get them. This was such a fun race, I look forward to more and who knows, maybe even a tri.