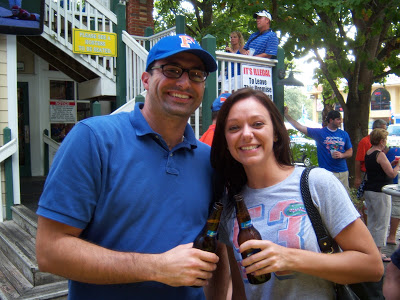 Ever feel like you don’t run to your potential? I’m kind of going through that right now. I think it’s one part scared to go out too fast and one part sheer laziness. Yes, that’s right. Laziness. I have run three marathons and one half marathon to date but I still feel like a lazy runner sometimes.

I like chatting. I like running comfortably. But I also like the feeling you get after you are completely, one hundred percent spent. I usually feel this way after track or 5K’s because my cardio gets the best workout. Thus why I love speed work. I obviously feel this way after long runs too.

Lately I’ve been taking it easy because I’m coming off an injury and that’s fine by me. But in general I feel like I have yet to really tap into my potential as a runner. When I started running, which wasn’t too long ago, I let my speed come naturally. And for the most part, I have not plateaued yet, but I know that I can work harder.

Coach EK and I have been talking about my running goals after MCM and the Ragnar Relay. I would like to get faster, plain and simple. I know that just finishing any race is a huge accomplishment and believe me, I encourage everyone to race, run, or walk regardless of pace. It just seems that now that I have some more experience under my belt it’s time to step up my game. If I get through MCM and Ragnar injury free then that’s what I shall do.

All of the above said I had one of the best weekends ever. I ran my 20 miler and while the last five miles were very tough, I finished it. I even ran it a bit faster than normal, which is probably why the last five had me cursing like a truck driver in my head.

After the run, I went to the UF vs Kentucky football game with a good friend from college. And I may or may not have had several beers. And Irish Car Bombs. And chomped my fool head off. It was just like back in the day when I was in college. Except that my legs were sore from running and I was D-O-N-E by eleven PM. Hahaha. When did I get so old?

I hope you all had great weekends and great runs.